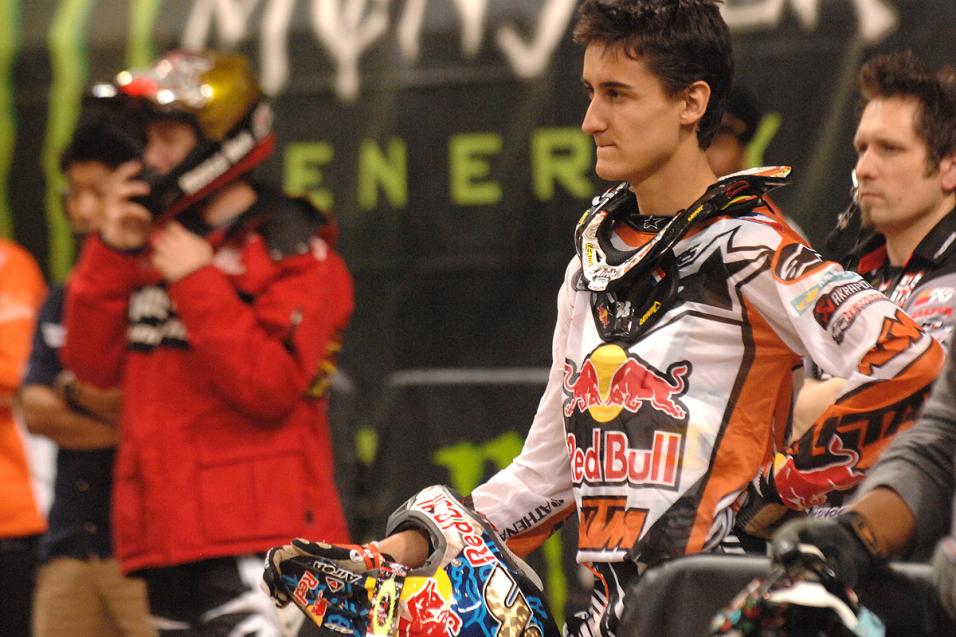 Advertisement | Advertise with Us
Edward Jones Dome St. Louis, MO St. Louis Monster Energy AMA Supercross Championship
Marvin Musquin’s entire 2011 Monster Energy Supercross season was wiped out via a torn ACL, and then a broken thumb knocked him out of a majority of last summer’s Lucas Oil Pro Motocross Championship. Since he’s relatively new to American racing, then, fans may not yet realize just how friendly the Frenchman is—or how fast.

Luckily, he’s getting bonus experience this year with a few rides on Red Bull KTM’s 350 SX-F. But while many in the U.S. have viewed the 350 experiment as a failed one, Musquin actually acquitted himself quite well on it in his big bike debut in St. Louis. Throughout the day, his #38 was routinely among the top five in practice lap times (he ultimately qualified sixth overall), and he finished the main event in a solid ninth. Not bad for his first time ever racing in the big class, especially considering this is his first season ever racing supercross even in the Lites class. 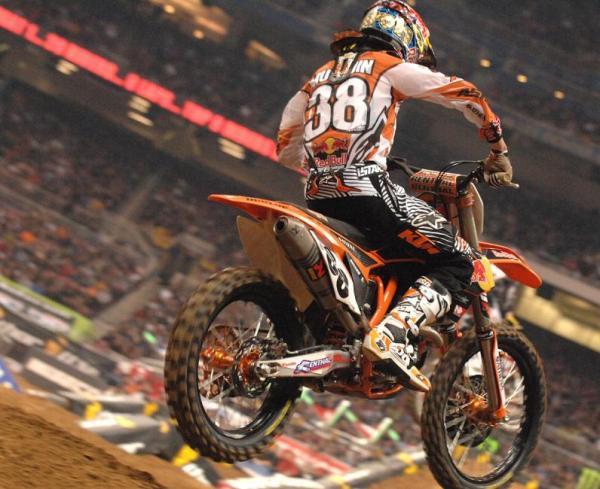 Musquin was able to calm his nerves in his 450 debut and secure his first top ten in the Supercross class.
Photo: Carl Stone

“Yeah, not too bad,” explained Musquin after the race. “First 450 race. I’m glad it’s over. I was kind of nervous, especially for the start and the first rhythm section. There were many ruts and it was kind of sketchy, so I’m glad it’s over. Not a good start. In the heat race, I crashed and I said, 'No way am I going to the LCQ. No way.' So I pushed pretty hard and I had a good pass and I came back sixth. Then the main event, I had a bad start again and it was hard to find the rhythm and the speed. Then I made some good passes like the heat race. I had fun, obviously because I tried to do something different in the track. I tried some different lines and tried to do some wheel tap in the whoops and stuff like that. And I made some good passes. So I’m happy with that. Ninth place, that’s in the top ten.”

While Musquin is a proven rider with two MX2 GP titles in Europe, even he found racing against the top 450 SX riders in the world an eye opener. In fact, he was nervous just lining up against them!

“Coming into the race, It looks like less pressure because I say there is no pressure from the team. I’m just riding, so that’s cool. But when you’re behind the gate and you have Bubba, Villopoto, Dungey, Windham next to you, it’s kind of nerving. And those bikes are pretty fast, the 450s,” said Musquin. 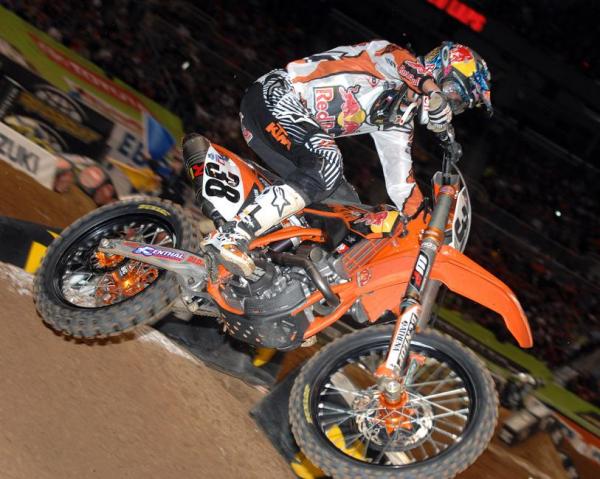 With the rugged Daytona track up next, can Musquin use his outdoor experience to grab another top ten?
Photo: Carl Stone

Musquin even had a “Welcome to the 450 class” moment. He explains:  “Stewart was behind me in the main event because he crashed and I heard him because he revved so hard over the jump.  I was kind of scared and he passed me really quick! But like I said, it seems like no pressure, but I was nervous. I’m glad it’s over.”

Musquin is one of the nicest riders in the pits, and the more races he does, the more the fans will get to like him—plus, there’s a good chance his speed in practice will result in better finishes in the main events soon.  “I knew that those guys are really fast,” he explained. “But I’m pretty happy about my speed because I finished sixth overall for practice lap times. So that was good. I was actually third for a long time. So I was really excited about that to see my number on the board. I just want to thank the team for giving me the chance to do it.”

Next up, the rugged Daytona track, which rides more like an outdoor circuit. While Musquin’s experience in motocross could be a boon there, expect his ride to be more consistent than blazing fast, as he’s still using these races to gain experience. No doubt, though, we’re finally getting a glimpse at his true potential.