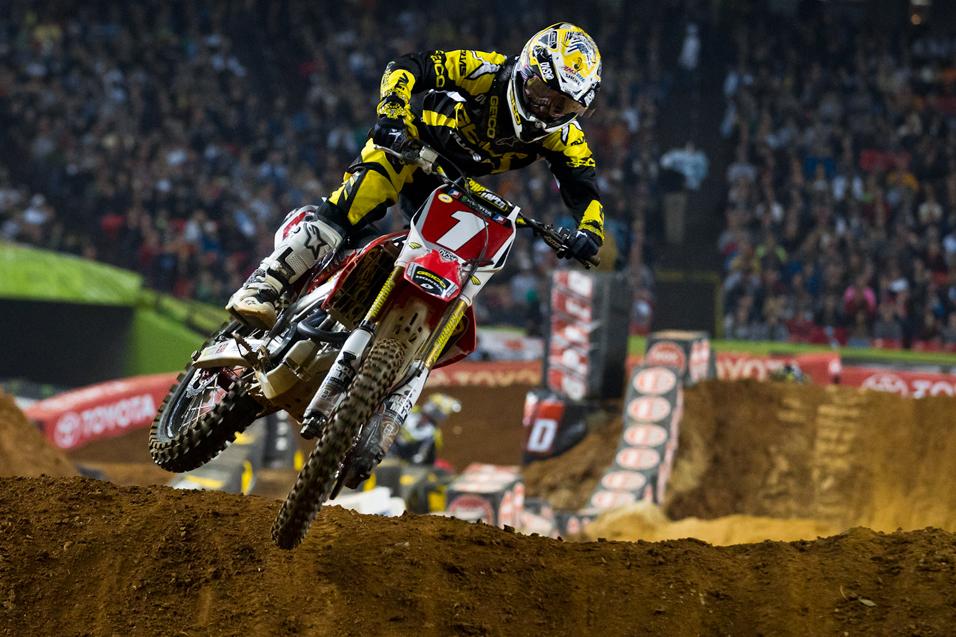 Advertisement | Advertise with Us
Edward Jones Dome St. Louis, MO St. Louis Monster Energy AMA Supercross Championship
Hello everyone! This is The Breakdown as you should already know, and we have another great Monster Energy Supercross race recorded and in the books. After a three-year hiatus from attending an SX race, it was nice to see the progress Feld has made. Big shout outs go to Dave Prater and crew. The show they put on has gotten so much better; it’s very cool to see this happening.

Let me start the column this week by clarifying a few things. The first is my dark horse pick from last week, Davi Millsaps. Now this guy can be as good as it gets on a bike. I predicted that he was "going to turn it on,” and he still may, but I never said he was going to win! You guys were bashing me like I predicted a W for Daisy. Now don’t get me wrong, he has more than enough talent to do it and I believe he can get it done this year, but I never said in ATL. Matt and his son enjoying Atlanta.

Seeing and scouting talent is what I do best. I do it each year for amateur teams and also give input to some pro teams. There is something I can spot in a rider that separates them from the rest. This is what I saw from our suite at the Dome.

Ken Roczen- This guy has it in America. I was impressed with this kid. He has the heart of lion, too, and it shows in his riding. I saw him get hung up in the gate and just never give up the whole race. He was a machine in the rhythm lanes. Watching him go three, three each lap was amazing. I predict that he puts heat on Justin Barcia this weekend and with a mistake from Barcia the championship gets tighter. He should kill it at St. Louis.

Cole Seely- Where the hell did this guy come from? I mean seriously? This guy also has “It.” He has had some success this year in the Lites class, but nothing like this. What I like about Seely is that fact he doesn’t get rattled easily. As a racer, that’s very hard thing to not let happen. Regardless of who is behind him he just rides his own race, and he led a lot of laps, which was impressive. Good job Cole.

Now lets look at some pictures of Atlanta.

We start this week on The Breakdown with one my old riders Blake Wharton. This picture is over the triple before the sand section. Everyone knows how steep the face of a triple is. Some of my riders have been doing this same thing over the steeper faced jumps at my track.

Look at how far back his butt is on the seat. Notice how high the front end is. Here's the thing. When riders jump steep face jumps, they feel like their weight has to be more to the back on the pegs or they will "endo" in the air. Well that can’t be further from the truth. You actually need to be slightly forward on these kinds of jumps to help off-set the rebound of the bike.

Had Blake’s head been closer to the bars the front end of this bike wouldn’t be as high as it is. I tell this to riders daily. They get scared to jump steep faced jumps because their front end is "Eddy the Eagle" in the air, so they get farther back on the seat when they need to be farther forward. 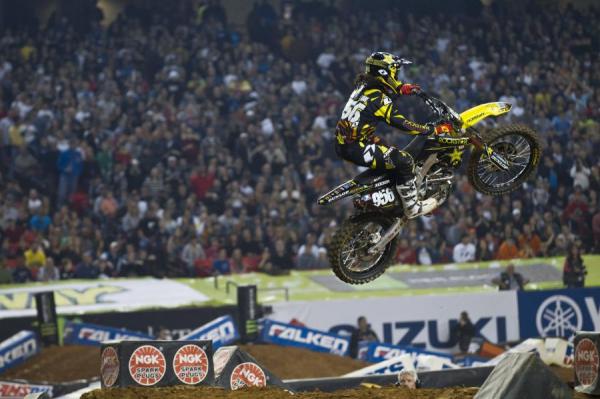 Now this is the same jump as Wharton only one frame earlier, but still a good picture to analyze, here’s why. Notice how much more forward his head is compared to Wharton’s, same thing with his legs and his butt. Both are more forward on the bike. Although this was not taken at the exact same time, you can clearly see a difference in the way the front end does on Barcia’s bike compared to Wharton’s.

Now notice how Justin cuts his bars to the right. He does this so his bike will pitch left. He wants it to pitch left so he can set up better for the right-handed bowl turn that follows this triple. If you were not there, in practice Barcia crashed in this turn twice, I believe. He whipped the bike the opposite way (to the right), meaning he landed to the left in the air before both crashes. Moral of the paragraph; scrub or whip the bike whichever way sets you up better for the following turn. If you don’t your more prone to a mistake in the following turn! 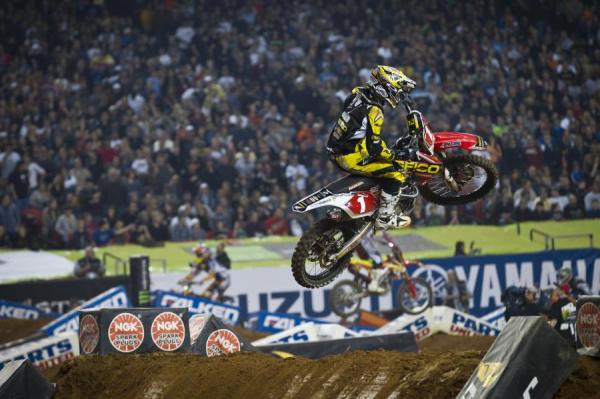 I loved watching Bubba in this section. He really had the sand section and this step-up after dialed all day long.

Most riders would land this step up standing then sitting down in the middle of the corner afterwards. The reason why that would be slow is because any time it’s not rough, standing up into a corner is slow, there’s always a pause in the corner. You got to sit down, put out your leg, lean the bike, etc.

Now Bubba lands this step-up ready for the corner ahead. Hips forward, so his leg stays high. His upper body is centered with the bike. Elbows are "pointy" for stability. And the chin is down. I like that his chin is down. He tucks his chin down to his chest so he can see further ahead in the next section. 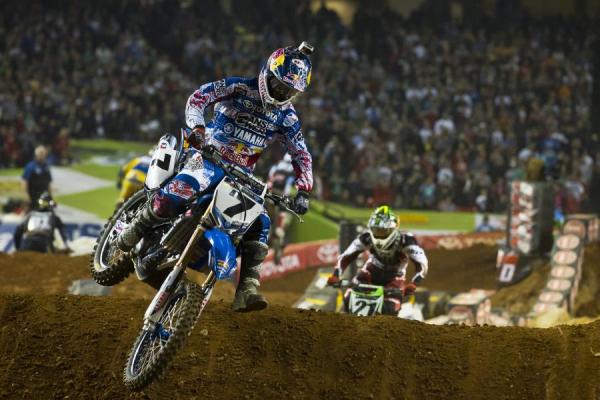 Notice how his left leg is about to be, but not yet, taken off the peg. Some riders like to make sure they have the jump completely cleared before they take their foot off incase they case the jump having both feet on the pegs as opposed to one already off, which will help with griping the bike to avoid crashing. Now you can’t knock Barcia, he killed it Saturday night. But I wanted you guys to see an opposite picture of what RD and Bubba were doing. Yes he is centered on the bike, head looks good, but you see he is standing. I notice a lot of Lites riders doing this as opposed to the 450 riders. They stand up going into too many of the turns causing that "pause effect".

If you watch the 450 guys, they sit down and get prepared early for their turns. They don’t try and stand up until the middle of it, and then they sit down. As long as the section before is not too rough, sitting down early and getting that leg out, will help you maintain constant speed and momentum through the turn.

Try it next time you ride and you will notice a big difference! 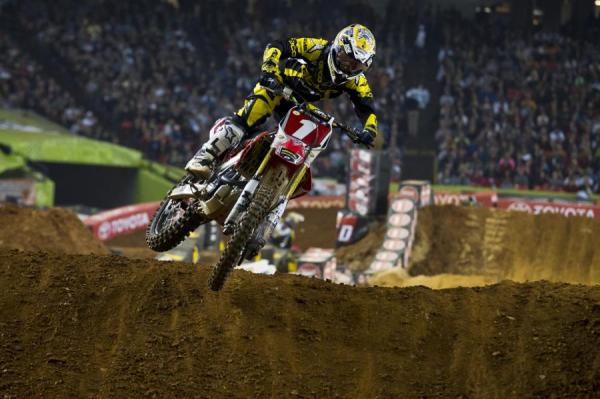 To the gentleman last week who asked what does "closing your chest" and what is having an "open chest" mean? Here is a better explanation.

Albee has an "open chest" while Reed has a "closed chest". You see Jimmy's shoulders are square; they’re not rounded off like Chad. Which in turn means Jimmy cannot control the bike as good. Look at Jimmy’s head, see how far back it is, while Reed's chest is closed off and his head is right where it needs to be to attack the whoops. I hope these pictures help. 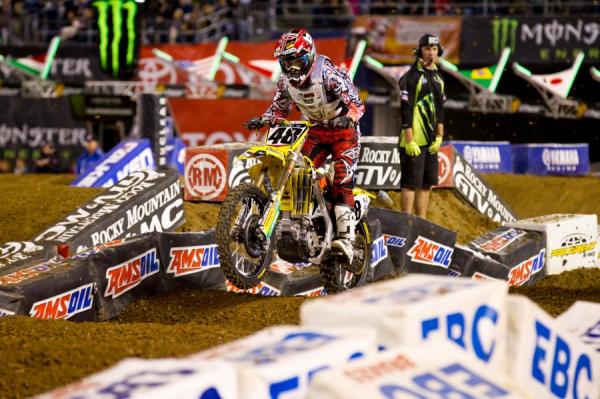 As a riding coach, the biggest battle to date has and always will be, riders standing up into there turns. So how did that myth get started you may ask? Here’s how.

Until recent years the bikes suspension was nowhere near where it is today. The bike would beat you to death if you sat down, so you had to stand up. With these new bikes, our suspension can handle bumps a lot better. Meaning you can sit down earlier and get prepared for the turn. So once you’re in the turn your ready to go.

Try this. Put a cone 20 feet before a turn. First do it standing up into the turn. After you do it that way, try sitting down at the cone. Sitting down works better every time!

That’s all for this week in The Breakdown. Hope you enjoyed it.