Atlanta has become Anaheim east for Monster Energy Supercross. The California base of the majority of the motocross industry makes Anaheim a big show on and off the track, and it seems like Atlanta is the same way for anyone in the East. This has certainly become one of the highest-profile rounds of the season, and the massive crowd that will be on hand tonight will prove why.

Moving east means a change in soil conditions, with the trademark red Georgia clay shaping up nicely. But things have come a long way since the old days here, when the track was super soft and rutted. Now the track crews have figured out ways to dry the soil out, to the point where the track gets hard and slick in spots. A few riders mentioned how the track even changes since Thursday's press day just because the heaters in the building continue to dry the soil out. Kyle Chisholm tells us that on tracks like this, the flat insides of the corners gets slick because that dirt has been there the longest, while the berms and jumps, which are built later, don't dry out quite as much.

The track looked fairly technical at first but the fastest riders on 450s made the rhythm sections look easy. One seperator could be the sand section, whichis long and rough, and starts with one of those big wall jumps. In the untimed practice, James Stewart jumped the wall and cleared half of the sand. It was awesome, but now the wall has been cut down a bit before the timed practices. We'll see if Stewart or anyone else can jump it. 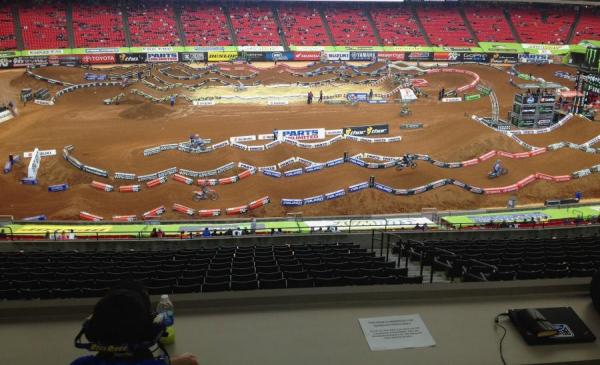