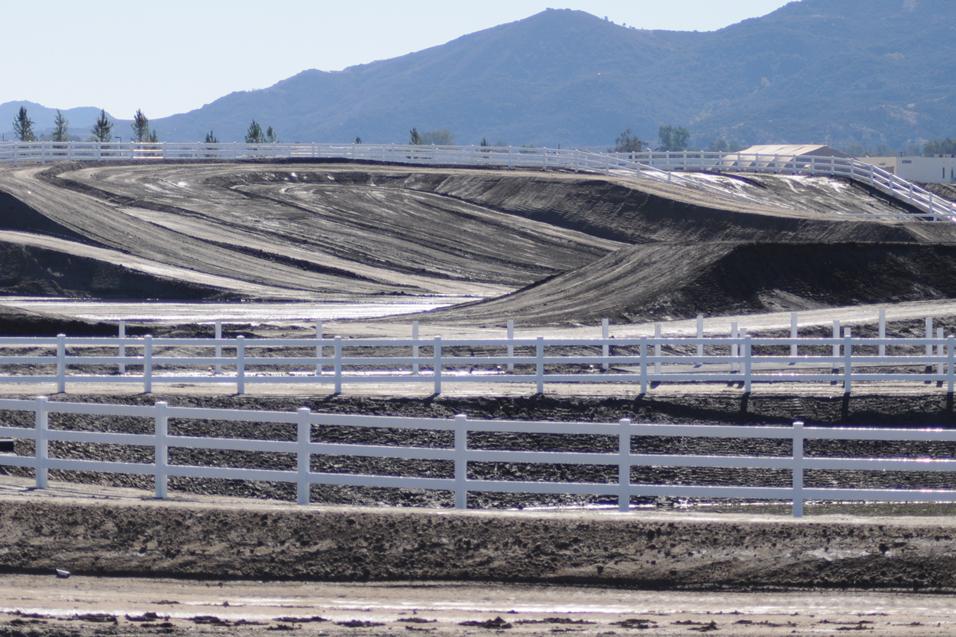 If you had told me in 2002 that Lake Elsinore, California would one day host an AMA national, I would have told you you were crazy and probably called the cops on you. The facility, long a hot bed for bikes done up in all black and dudes with no jerseys on was a fine place to go and ride when you didn’t want to drive far, but it was far from perfect. The dirt was hard and slippery (never mind when it was watered it was like trying to ride your bike around the Los Angeles Kings practice rink) and the jumps, while fun, left something to be desired.

With the news that Elsinore is going to host the final round of the nationals coming out, the circle of improvement is complete. I haven’t been there myself but I’ve spoken to a lot of guys who have and I’ve watched all the videos that are out there. It seems like an amazing place and a make-over on the level of that one time that Tyra Banks dressed up in a fat suit. Wait, did I just type that out?

I think that with enough effort by everyone involved, the Lake Elsinore track can be made as good as ever. There is some elevation, the soil itself has been changed over and according to everyone who has ridden it, it’s much better than it used to be. And that’s the ultimate test isn’t it? Never mind the concrete, the fencing and all that- the track has to be on par with the best out there and although it’s early, it seems that by September the place will be.

I rode the Lake Elsinore track the day it opened back in the 1990’s. It was a fun track, despite being a cosmetic nightmare. The facility was as basic as you could get: A few dirt courses on completely flat ground with a small shanty at the front to collect money. While the facility itself never really improved, the people didn’t seem to care. Dirt bike riders came out in droves to ride there. If you were a novice, a fan of the budding FMX movement or you just liked to hang out with other bros and listen to Cottonmouth Kings in your wife beaters and Dickies, this was the place for you. It also drew a lot of pro riders because it was close to Murrieta and Temecula. The facility was run into the ground until even the hardest of bros was forced to find another place to fly his bandana.

I was also at the re-opening of the Elsinore track recently and the place is hardly recognizable. The entry has been paved, there are concession areas, there are concrete walkways around the track, there are two ponds with fountains, there are grassy spectator areas, and all of the landscape is irrigated and planted with trees and seasonal flowers that bloom in different colors at different times of the year. Yes, I’m still talking about a motocross track. The course itself is unrecognizable. They’ve added elevation and softer soil to a new layout that rivals any pro level track. There is also a kids track and a vet track in case you don’t want to have a go at the massive triple step-up that will likely become a spectator favorite when the national blasts off there in September.

If you saw the old version you will need a shovel or some type of scooping device to pick your jaw up off the floor when you see this place now. If you’ve never been there you will get a look at what a “next level” motocross facility looks like. For motocross parks around the world, a new standard has been set.

I have never been to Lake Elsinore, but everything I’ve ever heard about it is pretty much exactly what Matthes wrote in his entry. It definitely wasn’t on the list of must-ride tracks if you were visiting Southern California, and by no stretch of the imagination would it ever be hosting a national.

Well, all that has changed, and I for one am glad that Lake Elsinore was given the Southern California national. Let me tell you why. Simply put, America holds the best and most prestigious motocross series in the entire world, and the tracks on the national circuit should aspire to, and reflect that fact. Take MotoGP, for example. It is the highest form of motorcycle racing on the planet, and the facilities that they frequent are spectacular. Obviously, those facilities are able to afford features that motocross tracks can’t, and probably never will, but that doesn’t mean that our national tracks, and the facilities that host them, shouldn’t be held to an extremely high standard.

From all accounts, it looks as though the folks in charge of Lake Elsinore are looking to hold their facility to that standard. They have one of the best track builders in the business in Marc Peters, who is the same man that’s responsible for High Point and Steel City, and they’ve shown they’re willing to put the money into making it a great looking facility by planting grass and trees, and erecting fences that don’t make the track resemble a prison yard. And from what I hear, there’s much, much more in the works.

America plays host to the best motocross racing on the planet, but if we want to keep it that way, our series must continue to evolve and improve. In my opinion, the fact that Lake Elsinore was willing to put out the effort and funds to raise the bar on a national level, especially in this economy, makes them deserving of a national.

Like Steve Matthes and Aaron Hansel have stated above, I have yet to visit the revamped Lake Elsinore. But in this day and age where word, and better yet, video, travel faster than Usain Bolt, I have witnessed the transformation of a once after-thought track turn itself into a bon-a-fide hot spot, with a national vibe written all over it.

The work Marc Peters and crew have put in such a short amount of time proves just how serious they are about building a track to host a national not just for this year, but for years to come.

The facility is able to withstand a national crowd, the track--according to those that have rode it--is up to par, and it lies in the hotbed of professional motocross. And the teams want to start and end the racing series on the west coast, just like they do in supercross. So what else can a person ask for?

I know that fans around the Southeast are agitated that the Lucas Oil Pro Motocross Championship will not be making a return to the South this year. Believe me, I feel your pain. I’m from the Southeast myself, South Carolina to be specific, and would love nothing more than to witness a National on my home soil. While it looks like the South will have to wait another year, trust me Davey Coombs and MX Sports are doing everything they can to get a track to the Southeast in 2013. The group spent a lot of time touring southern facilities in the fall, but they are going to be patient in this process to make sure the South not only gets a National, but the right National.

I got to ride at the old Lake Elsinore track about 10 years ago....oh who am I kidding?  I rode there but my riding standards are way different than an AMA Pro National, so there's no sense in me telling you what I think or thought.

But last weekend I was hanging out with 1999 AMA 250 National MX Champion Greg Albertyn, and he told me all about the new Lake Elsinore. Says it's way, way, way better than the old place, so whatever you thought about Lake Elsinore previously, just throw it away. He thinks the track is fun and cool. He knows better than I do.

I’ve also heard that the guys who own the place, the Nanci brothers, make their living building roadways in Southern California. You may notice that there are A LOT of roads in Southern California. So these are big time guys who know what they’re doing, and have the pockets to make it happen. No matter how much this race grows, these guys will be able to build something to accommodate. And their expertise will allow them to make the facility look first rate, because these are guys that deal in concrete, dirt and natural areas for a living.

I’m guessing this one is a labor of love, and so far so good, according to guys who would know better than me.

By the way, MX Sports, who runs the Lucas Oil Motocross Championship, is a sister company to us here at Racer X. What happened to the Pala race? Anyone who sat in the big traffic line at Pala knew there were some problems over there. From what I've heard, Lake Elsinore has a more stable base to build from in terms of future growth. One MX Sports person told me it's like a rider switching to a new team and just finding a better fit. And this one fits pretty good, because it is, after all, the set of On Any Sunday, the movie that launched motocross in America. Funny how everything comes full circle.