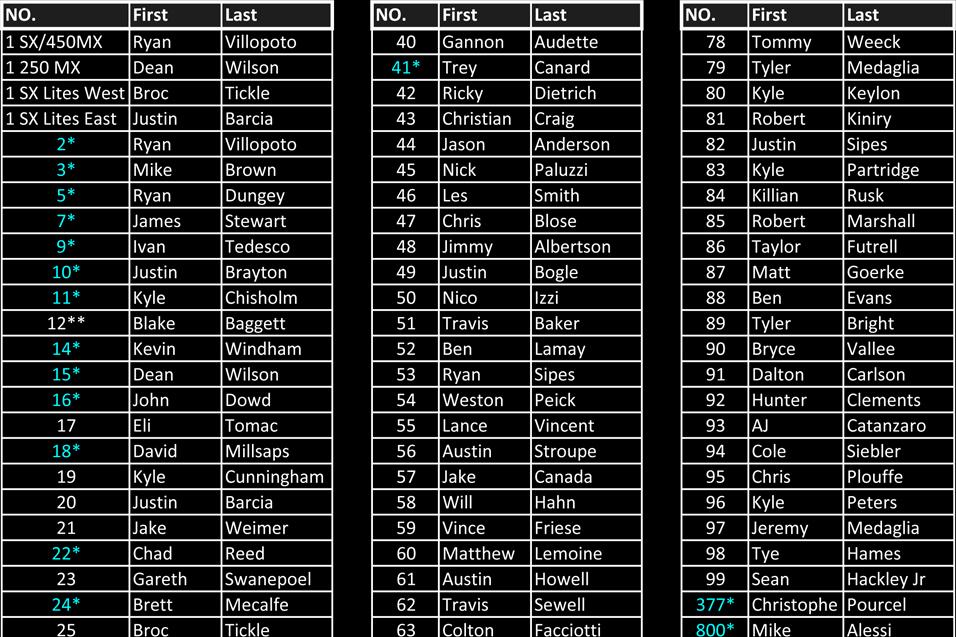 October 7, 2011 11:00am
by: Steve Matthes
The 2012 AMA numbers were recently released and if you want to check them out, go HERE and see where your favorite rider ended up, what he’ll be rocking in 2012 and maybe, if he’s good enough, beyond.

Between the comments on our website, the tweets and the ten plus pages on VitalMX about the numbers, it seems there’s still some serious confusion out there about the numbering system used in professional supercross/motocross. Fear not people, we’re here to explain it! This system was instilled in 2000 (with a few tweaks here and there) and it still seems to absolutely baffle some people.

So call us saints or a gift from the heavens, whatever you want. Here is a guide to how the numbers are distributed. Print this out and post it on your fridge so that next year, you have it all down, ok people?

Okay Matthes, you think you’re so smart--how does this numbering system work?

There are two types of numbers--career ones and earned ones. If you score inside the top ten in combined points (a total of points scored in the 450 SX class, and 450 and 250 MX) at the end of the year, you earn a career number.

PLEASE NOTE: 250SX DOES NOT COUNT TOWARDS YEAR END POINTS, BECAUSE THEY ARE REGIONAL AND NOT NATIONAL CHAMPIONSHIPS, AND THESE ARE NATIONAL NUMBERS. UNDERSTAND? IF I COULD PUT THIS IN SOMETHING MORE THAN CAPS LOCK, I WOULD.

PLEASE NOTE: 250SX DOES NOT COUNT TOWARDS YEAR END POINTS, BECAUSE THEY ARE REGIONAL AND NOT NATIONAL CHAMPIONSHIPS, AND THESE ARE NATIONAL NUMBERS. UNDERSTAND? IF I COULD PUT THIS IN SOMETHING MORE THAN CAPS LOCK, I WOULD.

Score inside the top 10 once, and you can choose any number between 10 and 99 and that’s it, you can run that for as long as you are an active racer. Anyone outside of the top ten has to run the numbers that correspond with their rankings at seasons end. Of course Sherlock, you can’t run a number that is already chosen by a top ten finisher so you just skip to the next one. 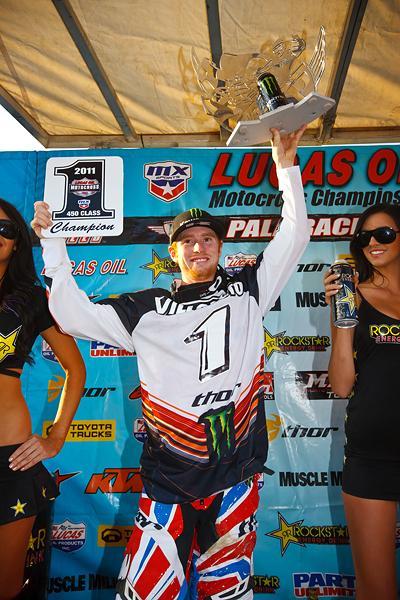 But Steve, what about the single digit numbers and how do I get one of those?

If you win a 250 or 450 title in the outdoors or the 450 supercross title, you can run a single-digit number. Of course you can’t pick the number 1 because that’s for the actual title winner and please tell me you knew that already. Trey Canard won last season’s 250 MX title but he turned down the offer for a single digit number in order to run #41 in honor of his late father, who rode with that number.  This season’s 250MX champion Dean Wilson also chose to stick with the #15 (which he earned as a permanent number last year) because we all know that it was an awesome number and one of the reasons why he won the title. Did I mention that I’m a big Tim Ferry fan?

Currently the only single digit numbers that are available for use are #4 (it was retired for five years after Ricky Carmichael retired but it’s now up for grabs. Good luck to the next guy that picks that by the way), #6 and #8. You could potentially run into the situation where there are more riders who have earned and want single digits than are available, and this has happened before. When Ryan Villopoto claimed the ’06 250 MX crown, he earned the right for a single digit. He decided to stick with a regular number for a year, waiting until Jeremy McGrath retired so he could then select #2. And then RV2 was born! 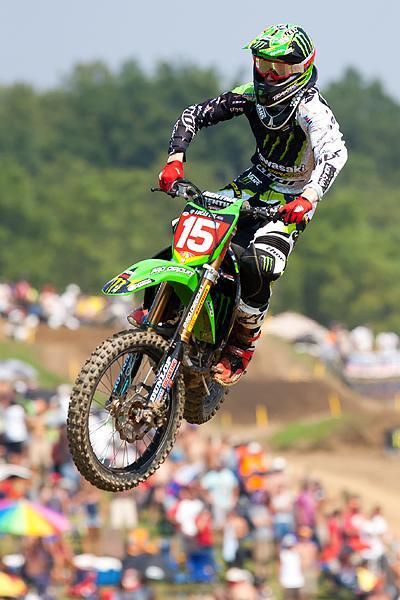 Wilson decided to hold onto the number 15 after taking his first career title this season.
Photo: Andrew Fredrickson

My favorite racer ever is Martin Davalos and he’s always run #577 but he was #23 this year, what’s up with that smarty-pants?

Clearly this question was submitted by Racer X Photo Editor (and Davalos fan club president) Andrew Fredrickson. Well, Fred, new to last year is the rule that you have to run the number that you earned so good-bye to the #577 Martin, see-ya to the #116 Ryan Morais and everyone else. You’re stuck with the number that you earned. And next year, with Josh Hansen racing the 450SX class, his points earned now count towards a number (remember the 250SX rule in all caps above? Hanny hasn’t earned national points in awhile).  He will have to run his earned number so his truck will now need a new paint job in 2013. Oh and by the way, if you earn a career number, you cannot pick a three-digit career number.

My apologies to Justin Bogle and Ken Roczen (two riders that went on Twitter to express their anger at not being able to run their favorite numbers) but that’s the way the cookie crumbles. Life’s not fair and whenever you guys start thinking about how it sucks you can’t run “your” number, check your bank balance and the fact that people want your autograph and realize that its all going to be ok. 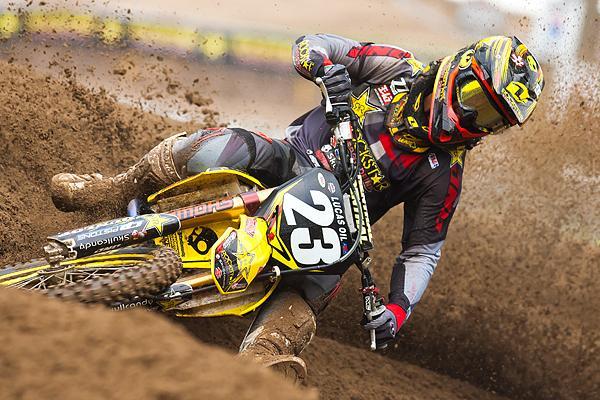 Ah Ha! Got you! What about Mike Alessi and how is he still allowed to run 800?

Mike Alessi is grandfathered in because he was allowed to pick 800 years ago as a career number before the rules changed. Some would say that Mike got really lucky in this but I would say that Mike’s good luck in this instance was countered greatly when he slid into that wood post at High Point years ago when he was practicing there. This is also the reason Travis Pastrana was allowed to stick with 199 for years, and Christophe Pourcel keeps 377. They selected three-digit career numbers prior to 2010, when the rule changed. No more career three-digit numbers from here on out.

The good news with this numbering system is that Jason Lawrence, due to not scoring any points in 2011, can now go back to his beloved #338. Some would say this is why he didn’t race all year but that can’t be confirmed.

Steve, what was with all this 25-points and John Dowd talk this year?

Well for years, a career number was just that, a career number. If you were still able to get on a bike and race a little bit, you kept your number. All you had to do was earn one national point (a top-20 in a moto) per year. But the powers that be, in a smart move, said before last year that if you couldn’t earn at least 25 points all season long, you would lose your career number. This prevented the numbers from being held when no one was actually using them all season because let’s face it, we don’t exactly get a lot of press releases saying that Broc Sellards had retired and the #18 was free. 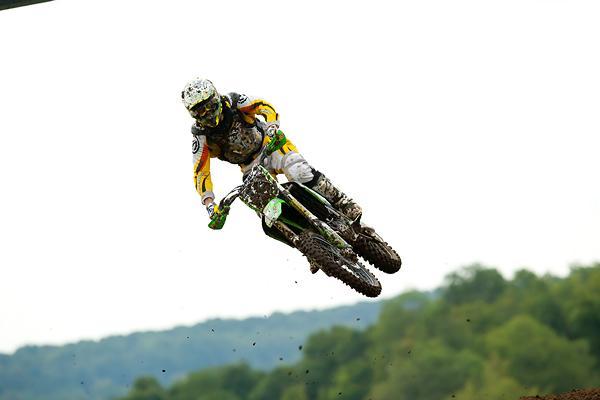 How much longer can Dowd hold on to the number 16? Forever?
Photo: Andrew Fredrickson

Two racers that are part-time in supercross and motocross are Dowd and Mike Brown (although Brown may beat you up if you said that to him) and both guys came to the races this year and earned the 25 points and therefore, they get to keep the #3 (Brown- the 2001 125MX champion) and #16 (Dowd who will probably have this number even when he’s being lowered into the ground).

Ok you seem to have all the answers tubby. But why didn’t Fredrik Noren and Fabian Izoird earn national numbers this year when they clearly scored a buttload of points?

This is a little confusing to me as well but with a couple of phone calls and emails I found out that both of these riders didn’t compete with AMA licenses and therefore were not eligible to collect points towards an AMA number. Noren’s from Sweden and Izoird is from France and maybe they just didn’t like America or something (kidding) and refused to get the paperwork going on this. Calle Aspergen, Noren’s Swedish teammate apparently does love America and he did race with an AMA license so he’s got a number. This doesn’t make a whole lot of sense to me but then again it also confused me when Billy Liles raced for Luxemburg at the Motocross des Nations years ago. And I can’t understand how Jimmy Albertson is Puerto Rican.

That number is considered an unlucky number here in North America and people seem to not want anything to do with it. Hence why you don’t have a 13th floor in a hotel or a row 13 on an airplane. So with that in mind, the AMA gives the rider who earned the 13 the choice as to whether he wants to run it. Eli Tomac chose not to run it and goes from #13 to #17 (which is the first available number that isn’t selected as a permanent number).

There are two schools of thought here. The #13 didn’t matter to Heath Voss, as he ran the #13 as a permanent number with no problems. And I seem to remember Sebastian Tortelli riding very, very fast with it as well. Then again Tortelli, besides being a handsome man, was also French and they don’t care about our stupid North American jinxes. 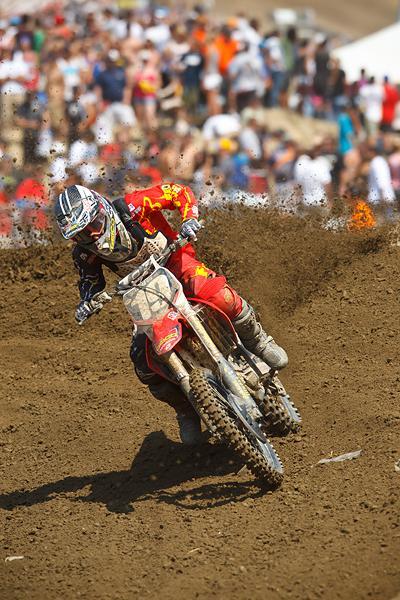 Tomac decided against going with the unluckiest number in America, and instead chose number 17.
Photo: Simon Cudby

It didn’t work out so good for Brian Swink (who asked the AMA halfway through supercross if he could switch to #130 because he was having such a bad season) and Rick Johnson, so who knows? Back in RJ’s day, they didn’t have career numbers. Did you know RJ broke his wrist in 1989 and earned 13, ran it in 1990, had a bad year, and earned 13 again, straight up in 1991? Now that is bad luck!

Josh Hill didn’t race all year and he keeps the #75! What gives?

Well the AMA isn’t a bunch of cruel heartless witches and if you have an injury that knocks you out for the year (like Hill and Grant Langston before him) then you can appeal to them to keep your number for another year. And I don’t think that’s a big problem with anyone, is it? If it is, please excuse yourself and check out of being a fan.

And I would imagine that because Christophe Pourcel was without a ride to start the year then came back for the outdoors with the Motoconcepts Yamaha team only to see that end up in flames three races in, that the AMA let him keep his career number 377 for another season. Ironically, or oddly, CP earned 24 points this year, exactly one point below the treshold. If he doesn’t earn 25 next year, his 377 could go away. But then again, he would just be thrown back into the three digit ranks, so he’d probably just get 377 again! 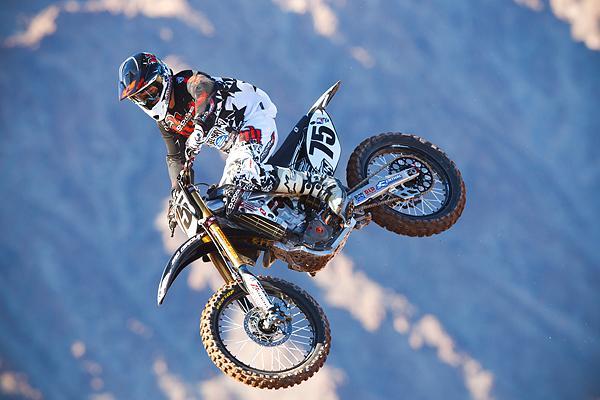 Josh Hill gets to hold on to number 75 due to injury.
Photo: Simon Cudby

Ok thanks Matthes, you’re the man and an awesome journalist. Thanks for helping me understand this a little better.

You’re welcome, it’s what I do. Inform and educate! By the way, in my mechanic career I worked for two riders who did well enough to finish inside the top ten overall and get to choose a permanent number. Tim Ferry in ’99 (he went with #15 despite me pleading with him to go #17 in honor of the greatest hockey player ever Wendel Clark) and Nick Wey in ’02 (who was #26 when we did it but chose #27 for career number).

Just a side note on all of this.