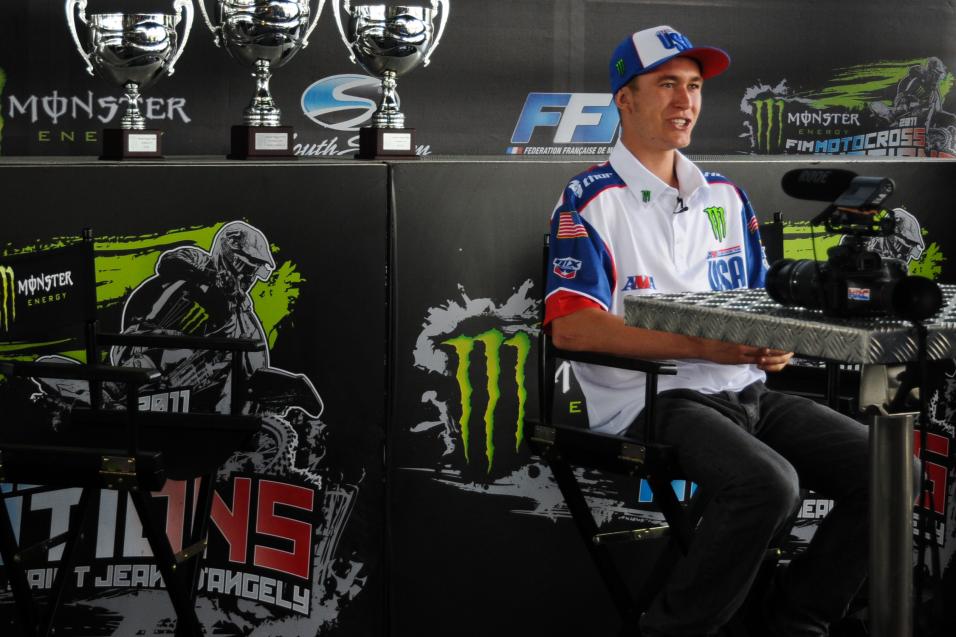 The Motocross of Nations begun under a cloud and threat of rain on Friday but by the evening the weather had cleared and only a mist of fumes from the hundreds of motorhomes stacked in the access roads to St Jean D’Angely in France covered the shallow valley.

The competition cranked into creaky life (let’s not forget that the meeting is 65 years old this year) with most of the riders rolling into the circuit that also intermittently hosts the Grand Prix of France and getting acquainted with the surroundings that were for the most part dwarfed by the monolith that was the double Monster Energy rig towering over the principal spectator bank. As the mechanics changed plastics and numbers from those normally associated with the race machinery during the season, the riders themselves busied themselves with a media briefing (if they were Monster) signing autographs and posing for pictures (if they were American, French or Chad Reed) and then taking part in the traditional opening press conference. Meanwhile media and industry figures were trying not to kill themselves in an entertaining pit-bike championship on the St Jean start-straight. 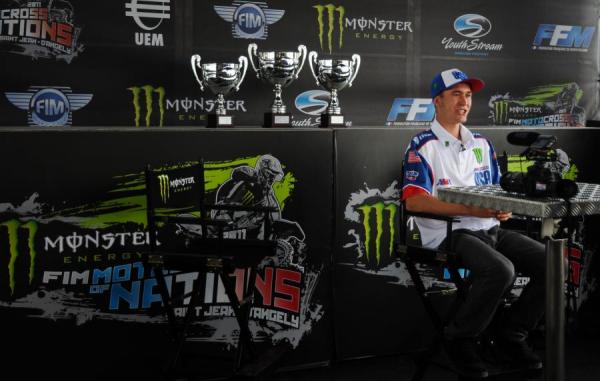 In the press room the top ten teams were introduced and it was hard not to appreciate Team USA’s formidability when a phenomenal trio on paper appear such an imposing presence in the flesh; perhaps a healthy percentage of the team’s invincibility comes from that aura of carrying the 1, 2, 3 plates and showing the rest of the field a jersey with ‘Villopoto’, ‘Dungey’ and ‘Baggett’ emblazoned on the back. The three paid lip service to the trickiness of the race, with Villopoto insisting it was fun but also quite stressful. Dungey meanwhile was calmness personified having won two editions of the last six that Team USA has conquered in a row since 2005. Baggett, the Nations rookie, was all smiles and clearly liking the attention and spectacle of it all. He did draw reference to one characteristic of the St Jean hard-pack: “The track looks awesome with some big jumps but it’s pretty rocky out there so for sure we’ll need the chest protectors and hand guards.” The French course was also ruminated by RV: “You know we’ve got hard pack tracks like that in the States and I think it’ll mean some work on the bike set-up and some adjustments over the weekend.”

Elsewhere Christophe Pourcel, a late substitute for 2011 MX1 FIM Motocross World Championship runner-up Steven Frossard (chest injury), commented he was very happy to be back on the team just five days after saying at the Grand Prix of Italy that he didn’t want to talk about the race at all. The Frenchman had a late call to step up to the Tricolor cause and the home Nation will enjoy ferocious support and levels of attention, going by the steady build-up here today. 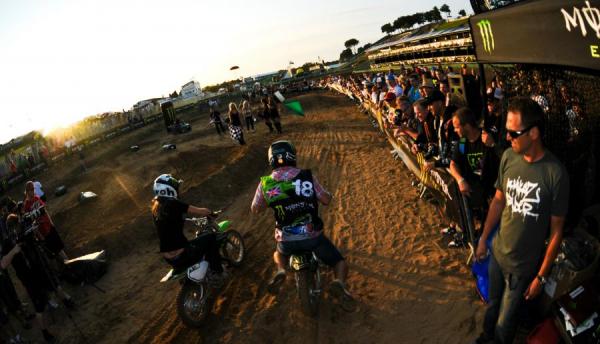 Marvin Musquin referred to his ‘bad season’ in the AMA, Dean Wilson said he is thinking about winning a ‘Lites’ world championship before he gets too old to do so after 2013 (the age limit for MX2 is pegged at 23) and Belgium Team Manager Joel Smets was hard-pushed to explain why there was a high rate of injuries in the world championship this year but he felt that riders “do not race enough.” Chad Reed remarked that the Aussie team were “not the best looking in the world but we will do our best and if that happens individually then we might make the podium.” He also chatted about how his Millville ‘flight’ still seems to follow him around: “Whether it’s MotoGP or wherever I go people want to talk about that crash. I think it is time to let go of that and move on. It scared the hell outta me.”

Tomorrow the official ballot to determine the entry of countries into the gate for the Qualification Heats (run one per class) takes place early in the morning and is followed by the first session. The weather forecast is said to be good, so fingers crossed.