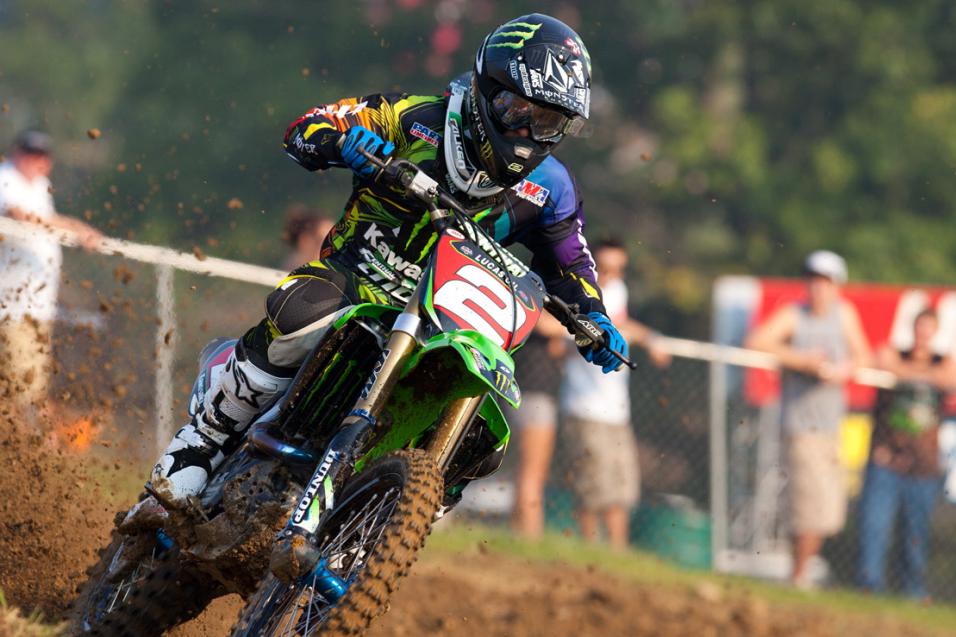 And then there were two. Heading into round eleven of the 2011 Lucas Oil AMA Pro Motocross Championship at Steel City the list of 450 championship contenders had dwindled down to two. With just four motos remaining, the battle for supremacy atop the 450 class had reached its boiling point.

Points leader Ryan Villopoto would grab the holeshot, but it was Ryan Dungey taking control early as he made an aggressive pass on Justin Barcia and Villopoto to take the lead. From there it was a game of cat and mouse between the Ryans. Dungey would stretch his lead only to have Villopoto reel him right back in. Villopoto would make a charge only to have Dungey shut the door.

As the laps began to tick away Villopoto started to become more aggressive, trying anything and everything to get around Dungey. But in the face of adversity and with the championship on the line, Dungey remained cool and collected.

As the white flag swirled in the wind, Villopoto began to make his charge, closing in on the back wheel of Dungey. With only four corners to go and the valuable championship points on the line, Villopoto really began to apply the pressure to Dungey. But once again Dungey was there to shut the door.

With only one corner remaining Villopoto would make a last ditch effort, railing the outside of the last turn to make a dramatic last corner pass on Dungey for the lead and the win. In one of the most theatrical races all season Villopoto was able to stretch his points lead over Dungey with just three motos remaining.

Overshadowed by all the championship drama was Brett Metcalfe who followed up his first career victory with a third place finish. Barcia and Chad Reed would round out the top-five.