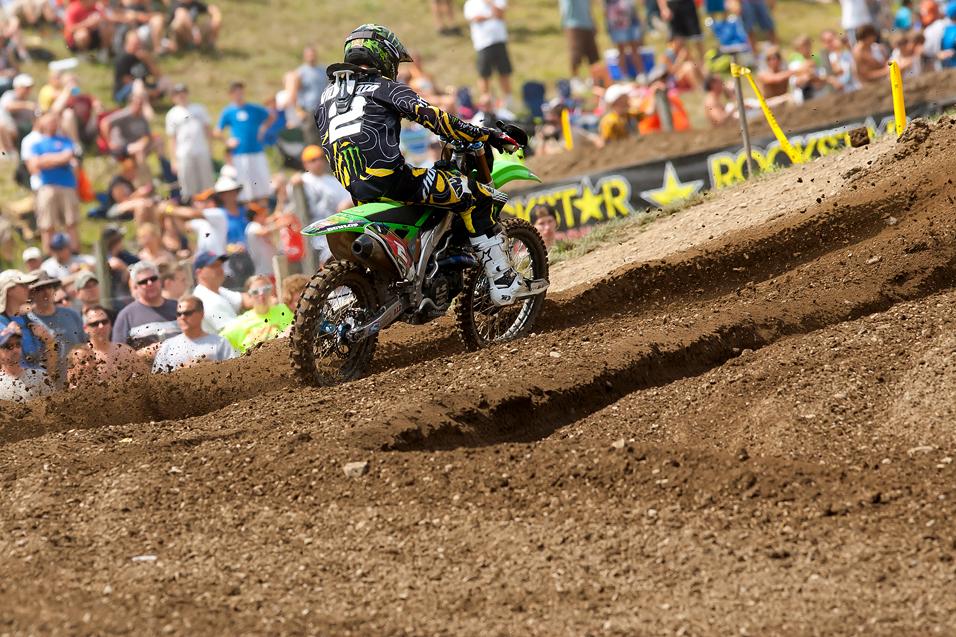 August 25, 2011 11:00am
by: Jason Weigandt
The Wick 338 Southwick, MA Moto-X 338 Lucas Oil AMA Pro Motocross Championship
It’s been so long since Ryan Villopoto has raced at Southwick that we can barely remember the last time we saw him there. Injuries prevented him from visiting the track in 2009 and 2010, which means we’ll have to check the archives from 2008 to find RV’s last performance at the track. And it turns out that race has been long forgotten in bench-racing circles.

By late 2008, RV was already set to clinch a third-straight AMA Lites Motocross Championship. It wasn’t even close, really, as the seasoned RV had reeled off a ridiculous 16-moto win streak in the middle of the season. He was going to win this championship. And supercross antagonists like Trey Canard and Jason Lawrence? They were long gone by the time the series reached Southwick.

Can Villopoto repeat his 2008 successes at Southwick this weekend?
Photo: Andrew Fredrickson

RV did have one major rival left, and the name is familiar: Ryan Dungey. The Dunge entered the 2008 season without a career outdoor win, but each week, he crept closer to his goal. By mid season, he was closing in on a victory, and then, finally, he held off Villopoto in a fantastic battle at Washougal to take his first career win.

Dungey didn’t have a shot at the title, but he was trying to build momentum for the future. And he did. Dungey ended the 2008 season with three wins in the final four races, grabbing another victory at his home track at Millville and also at the finale at Steel City, when Villopoto crashed out of his last-ever Lites race. Dungey’s late-season streak and Villopoto’s championship took most of the headlines during the 2008 MX Lites season.

But which of the last four rounds did Dungey not win? Southwick. There, Villopoto absolutely dominated, going 1-1, leaving Dungey behind in both motos, and leaving little doubt that he was one of the best 125/250F class riders ever.

Most of us have forgotten about that 2008 triumph, for at the time it was just another in a long line of Villopoto wins in the Lites class. But surely, RV himself will have fond memories of that race as he rolls over the gate this weekend for the first time in three years.