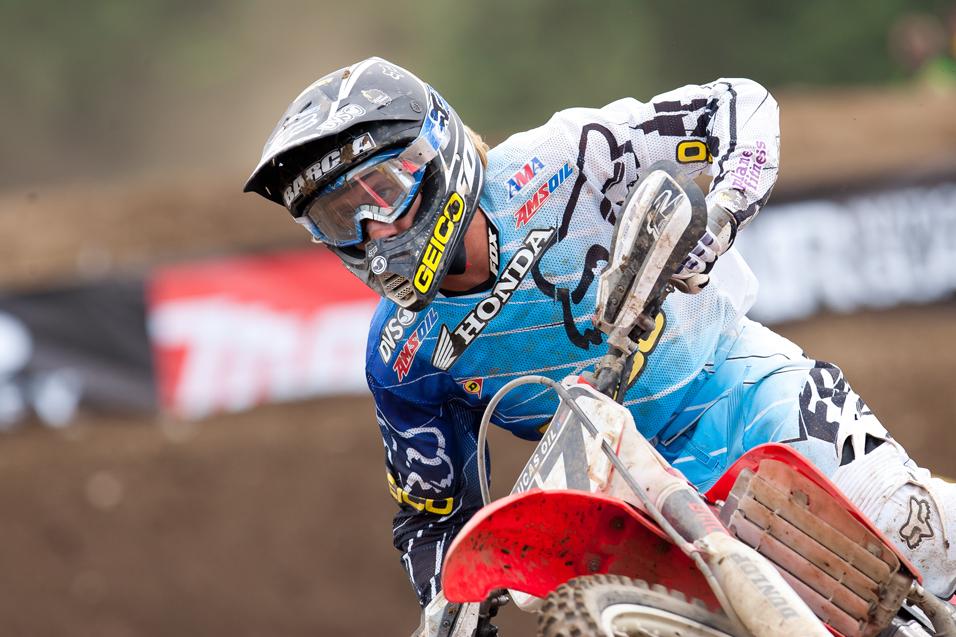 Advertisement | Advertise with Us
The word leaked out a couple weeks ago that GEICO Honda’s Justin Barcia was getting called up to the 450 class to ride for the injury-depleted Factory Honda and immediately the message boards and pit pundits like myself were asking each other, “How’s he gonna’ do?”

That was the question all weekend at Unadilla as people milled around the factory Honda truck looking at the number 17 CRF450. Maybe it was because we were in New York, which is Justin’s home state, but there was definitely some extra excitement to the 450 class. Barcia is an incredible talent, but is having a bit of a tough outdoor season (after winning his first SX title back in May), was looking to save a motocross season that has involved a lot of holeshots, a sickness and some crashes. He was rolling the dice with this move. 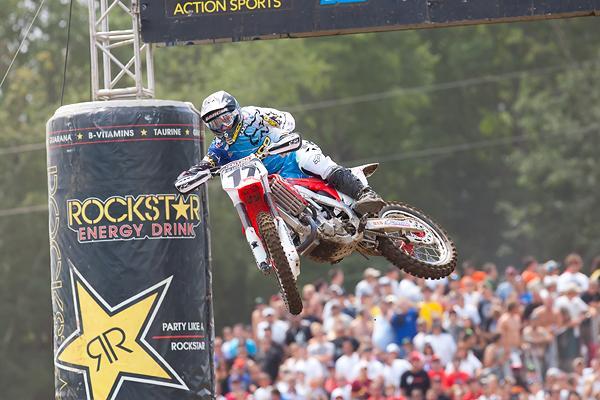 Barcia was impressive in his 450 debut.
Photo: Andrew Fredrickson

Was the bigger bike going to make him crash even harder? Would the wild child overrev the machine like he does on the 250 and in the process, go nowhere and end up struggling? What about his fitness? The heavier, more powerful 450 might wear the kid out, right?

Well, we all saw the results. Barcia went 3-3 on the day and was about three quarters of a lap away from snatching second overall on the day. Ryan Dungey, the defending champion, was having a tough time getting by the kid and they came together when Dungey went for the pass sending Barcia to the ground hard. Afterwards, at the podium and the press conference, Dungey let it be known that he wasn’t pleased with Barcia’s riding and just like that folks, we have a little bit of a rivalry.

I spoke with a very happy Barcia after the race about this switcheroo and first thing he wanted me to know was that he was very thankful for his current team GEICO Honda letting him go and do this for the factory squad. Asked about his expectations going into the day, he said, “I really didn’t have any expectations coming in, I wanted to be top-ten, I guess. I just wanted to do what the team told me to do, which was ride within my limits and be safe.”

Well a top-ten was almost for sure in the cards for him barring injury, but it’s safe to say that Barcia surpassed everyone’s expectations with his ride. What a feeling it had to be for the kid to holeshot the first 450 moto, pull out a five second lead on the best riders in the world and in front of his hometown crowd. We can all dream right?

As to the questions I asked earlier in this column, well I think we got our answer. The bike seemed to smooth him out and although there was a few “Bam-Bam Moments,” overall Justin looked like he was on a 450 his whole life. Just like I saw in the tight confines of Bercy last fall, Justin Barcia can ride anything he wants really, really fast. 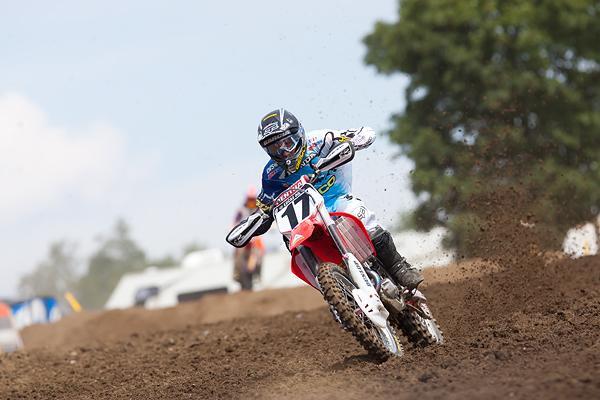 “I don’t get it but I do seem to smooth out on the bigger bike! It doesn’t make sense but I think it’s going to help my skills when I get back on the 250,” he commented after the race. The 450 is bigger and it’s so fast that you can’t override it whereas on the 250, I do think that I override it. I think it’s going to help me out a lot,” said Barcia.

And that’s a scary thing for the rest of the 250 class in 2012. The Wild Child may just have found a little bit more control to go with his already impressive speed. The problem for Barcia has always been that he tries almost too hard, he spends as much time going sideways and blowing up berms as he does going forward. The injury he sustained early on in supercross helped him calm down and ride within his limits and what do you know? He started winning races and being consistent. Now add his 450 motocross results into everything and his confidence and his control might be better than ever.

And what about the incident with Dungey and RD’s comments in the press conference?

“I didn’t want to get landed on!” Justin protested after the race. “He (Dungey) swept the outside and there was a lapper in my line so I went over and that’s what happened. I tried to say sorry but he wasn’t cool about it. And in the press conference he wasn’t being the coolest about it. What can you do, it’s racing and I’m here to race. I’m a little bummed about the whole deal.”

Say what you want about Barcia but he’s always been a racer first and foremost, he’s not intimidated by anyone or anything and although he sometimes shows his youth out on the track, he can oftentimes back up his bravado out there.

“I guess I can’t control myself. I don’t do it on purpose or anything!” he added.

I say welcome to the 450 class Justin, it’s an exciting thing for us that watch and report on what happens and with his favorite track coming up in two weeks (Southwick), one would think that it’s going to be more than just Ryan Dungey that has to deal with Bam-Bam.

On the Pulpmx Show last night, I asked current points leader Ryan Villopoto what he thinks of Dungey being upset with Barcia at Unadilla. What does RV think about Barcia getting up in the mix and potentially riding aggressive around the title contenders? “Ask me again if that does happen,” said Villopoto.

I would think that after Southwick, we should all get ready to ask that very question.