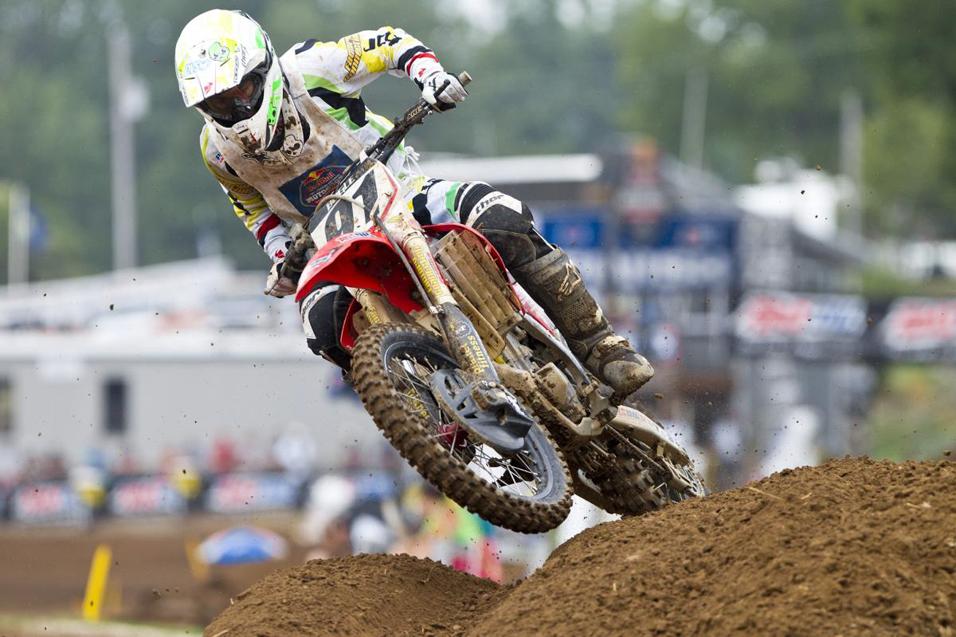 Advertisement | Advertise with Us
Loretta Lynn Ranch Hurricane Mills, TN AMA Amateur National Motocross Championship (Loretta Lynn's) Amateur National Motocross Championship
Yesterday we mentioned the transition from minicycles to full-sized bikes, and the impact it has on a career. Some of the recent star amateur grads, like Trey Canard, Dean Wilson, and now Justin Bogle, didn’t really hit their stride until they hit the B class on big bikes. And we’ve all heard playground stories of super-fast 80 riders who couldn’t duplicate that success on a 125 or 250 (or 450). Let’s dig into the big bike classes and see what’s happening right now.

Schoolboy
This used to be a lot simpler back in the day. The fastest mini riders would move up and race the 125 (12-15) class. That’s what James Stewart, Davi Millsaps, and Josh Hill, did, for example. Now it’s a little muddied up since we have 250Fs, and some think the transition from minis should take place on a 125, not a 250. So instead of 125 (12-15) Stock and Mod, we now have Schoolboy 1 for two-strokes and Schoolboy 2 for four-strokes. Also, both classes now carry the B/C designation, while back in the day A riders raced this class (Stewart, for example, won the 125 A and Schoolboy Mod classes in his final year at the Ranch). 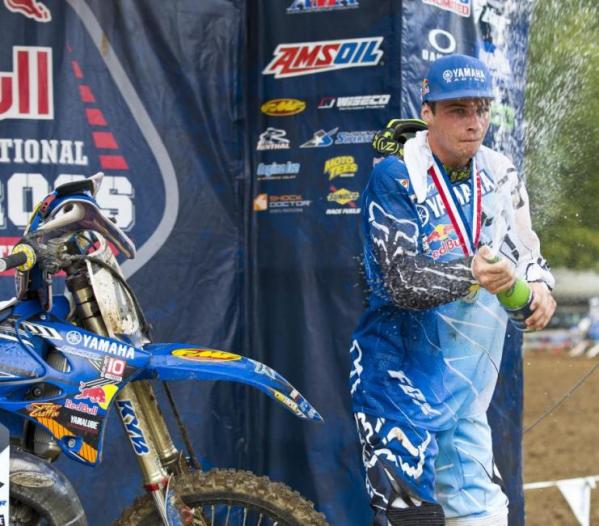 The Schoolboy 1 for 125s is still a coveted class to win, so you’ll often see manufacturers that don’t even produce 125s anymore stick their factory boys on old bikes. But this year the class belongs to the Yamaha YZ125s, with Matt Bisceglia (say it, Bish-shay-lee-uh) taking a pretty solid win. This guy used to battle Adam Cianciarulo before he got too big for minis, so he’s got speed. I did hear Tony Alessi once say that your skills erode the sooner you have to get onto big bikes, though, so maybe this is a drawback for Matt? Tony couldn’t possibly have had a weird theory, right?

Another Yamaha YZ125 rider, Chris Alldredge, was fast and took second overall, while Suzuki prospect Jace Owen took third. Claudio Leocata went 2-3-DNF. These kids are good but it’s hard to get a good judgment on them until they fall into the B or A ranks. This is always the trouble with Schoolboy—often the riders grow too tall, too fast and have to transfer to big bikes before most of their peers.

In the Schoolboy 2 class, for 250Fs, Owen took the win. A couple of top B riders were in this class, like Zach Bell and Justin Hill, but they had consistency issues and didn’t play into the championship here. But they got theirs in the B class. 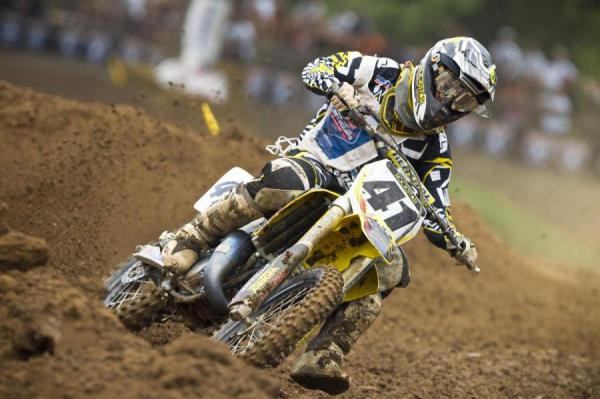 B Classes
As I wrote before, some riders are able to take decent amateur careers and suddenly launch into the stratosphere with a good year in the B ranks. Canard and Bogle turned B success into Factory Connection Honda rides in the A class and then the pro ranks. Last year as a B rider, Bogle was the only rider to win all six of his motos here, and he’s been hard to stop ever since he got that shot of confidence.

This year’s B group was all over the map. As mentioned above, Justin Hill and Zach Bell had problems in Schoolboy 2, but they went 1-2 in 250 B Stock. Congrats to Hill on his first Loretta’s title (and yes, he joins his brother Josh in the LL’s Hall of Fame now). Over the last two years, I’ve seen some huge improvements in little Hill and he could be a force in the A ranks. Bell has always been good and this is just another notch for him.

Hill and Bell beat Canada’s Cole Thompson in 250 B stock, but Thompson came in on his 450 and handled the 450 B Stock class with ease for a title. A word of caution on that, though: 450 B Stock is a bit of an odd ball class, the fastest B riders are usually focused on 250s or modified bikes since that’s what they’ll be racing as professionals. A lot of riders have won their only career championships in 450 B Stock. But, Bogle did win that class last year, so maybe my theory is way off. 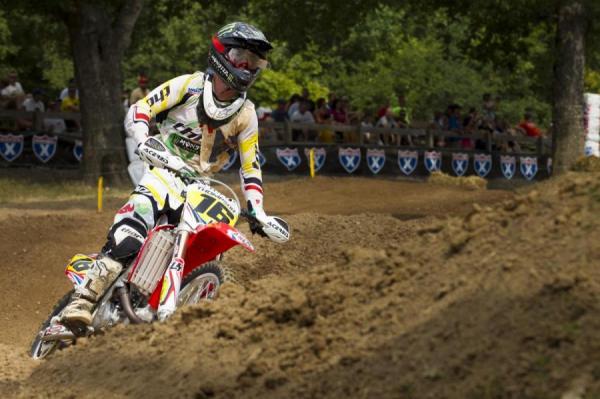 One other B rider to mention is Jeremy Martin (Alex’s brother), who has been as fast and strong as anyone in the B class the last two years but has zero titles to show for it. He went 4-1-8 and 2-4-1 in his motos this year. Definitely hasn’t had the luck, but like mini-Josh Hill, mini-Alex Martin has made huge strides over the last two years. Wait, is it really possible to be more mini than Alex Martin?

The B mod classes featured some fast players. Thomas Covington has done well in his transition from minicycles to bigs, and he won 250 B Mod. The favorite coming in was Suzuki’s Joey Savatgy (say it, Sah-voj-ee) but he crashed in moto one and finished 29th. He was back strong in moto two, waging a fantastic battle with Covington, but Covington won it. Can’t say the kid didn’t earn the title.

Savatgy probably had the biggest bummer week at the Ranch. He crashed to 29th in the first 250 B Mod moto, and then won the first 450 B Mod moto—only to be penalized for jumping the gate. Scratch him from any sort of title contention.

Maybe the only rider more bummed was Cooper Webb, who had a few too many crashes in Supermini 2 to battle Cianciarulo, Jordon Smith and company for that title. And in his big bike debut in Schoolboy 2, anything that could have gone wrong did go wrong. Yes, the transition can be tough, especially when you’re trying to race Supermini on a 150 and a 250 in the same week. 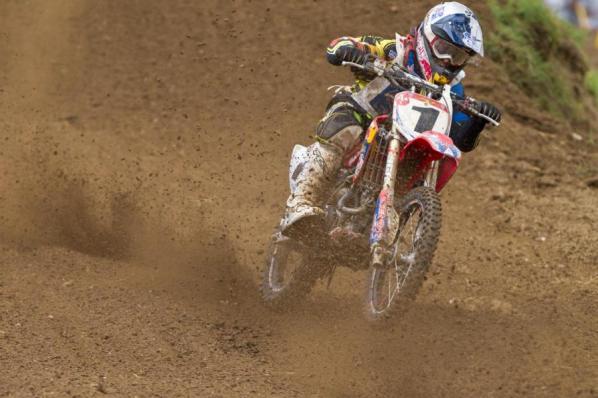 It was a tought week for Copper Weeb at the Ranch.
Photo: Garth Milan

The B class results were very inconsistent this year so it’s hard to pick a standout, but I’d say the best week went to Justin Summers, who went 1-1-1 in 450 B Mod and also got 5th overall in 250 B Mod. And Blake Savage, who had never even raced Loretta’s before, took second in both of his B classes. That was impressive. But no one went all Canard/Wilson/Bogle and took their career to a whole ‘nother level this year.

A Classes
There are three A classes for expert riders: 450 and 250 A, and Open A Pro Sport. There’s no major difference between A and A Pro Sport as far as talent and speed, but Pro Sport does allow riders who have tried a few pro races to race at Loretta’s one last time.

Obviously, the “next big things” play in the A class. Usually the top rider in the A ranks wins the AMA Horizon Award, gets a factory ride and wins some races as a pro in his rookie season. But, um, that hasn’t quite panned out for last year’s top A rider, Jason Anderson. My pep talks with this kid obviously didn’t work.

Meanwhile Bogle rolled in with the hype this year and rode well, but he ran into a trap that many “next big things” hit in their final run at the Ranch. Someone else in the A class knows he can turn a career around if he can just beat the favorite, and he comes in hungry!

That man this year was Kyle Peters, who was a holeshot and sprint machine. He could have won two A titles, but he crashed hard while leading the first Open A Pro Sport moto. But in 250 A, he had the stuff to match Bogle, and he won a showdown with him in the third moto to win the title. Well done, and definitely the most exciting moto of the week. 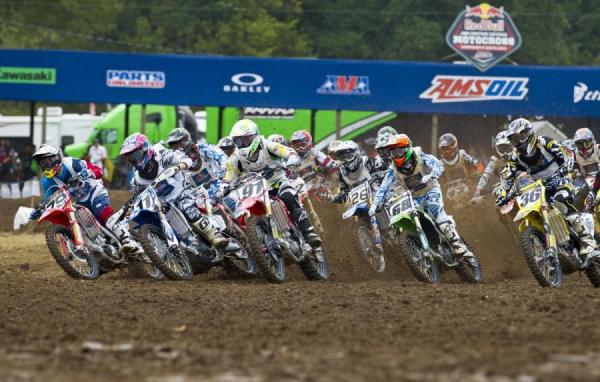 Kyle Peters (#11) was able to outlast Justin Bogle for the 250 A title.
Photo: Garth Milan

I’ve seen this happen before. Broc Hepler was supposed to be the man back in 2003, and Brian Johnson put it to him in 125 A Pro Sport. Hepler came into Loretta’s ’03 with a factory ride sewn up and Johnson didn’t—that’s extra motivation there. Wil Hahn came in battling for a ride a few years later when he beat super-talent Josh Hill in a moto. Similarly, Peters has a Star Racing deal through the last four nationals but nothing set yet for 2012. Bogle does. Peters was fired up.

Bogle is darned fast and aggressive, though, and if you’ve heard some hype on this kid I think it’s legit. But then again, I thought Anderson would kill it this year.

Chris Plouffe won the Open A Pro Sport title in a class that was all over the map. Zack Freeberg won the first moto with a great come-from-behind ride, then crashed into the first moto runner up, Grant Ransdell, coming off of the gate in moto two. They finished way back. Peters crashed out of contention in this one, as well. Do not say Plouffe got lucky though—no one lucks into titles down at the Ranch.

Bogle won the Horizon Award since he went 1-2 in his two A classes, Peters struggled big time after his crash in his other class, so there really wasn’t much of an argument here. The real battle will come to see who succeeds at the next level. And really, that’s what we’re all trying to scout at Loretta’s. See you kids at Unadilla! 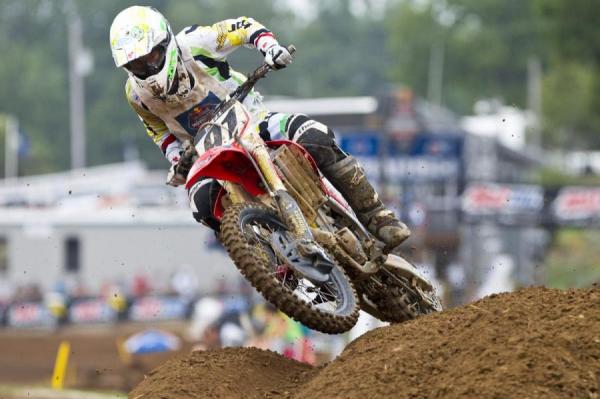