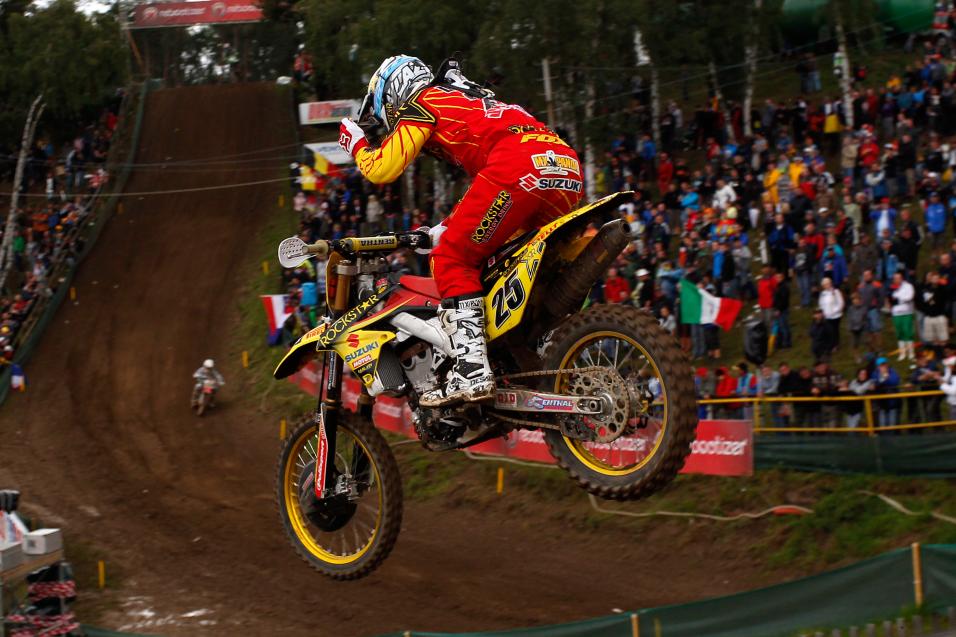 August 8, 2011 8:55am
by: Adam Wheeler
The FIM Motocross World Championship heads into a brief summer break with both MX1 and MX2 categories on the brink of drawing to a conclusion after the twelfth round of fifteen was played out under the grey skies of Loket for the Casino Bonver Grand Prix of Czech Republic. Rockstar Suzuki’s Clement Desalle put six rounds of shoulder injury frustration behind him to master the slippery terrain and go 2-1 for his fourth win of the year; levelling with defending number one Red Bull Teka KTM’s Tony Cairoli who he is also chasing in the points and trails by 48 with a maximum of 150 left up for grabs. The title contest is a little less clear cut in MX2. Red Bull Teka KTM’s Ken Roczen reached double figures in terms of podium results with his seventh victory of 2011 and sixth double but could only just beat team-mate Jeffrey Herlings (the seventh occasion that the pair have been 1-2 overall in any order) and claim a minimal points extension. The difference is now 27 with CLS Kawasaki Monster Energy Pro Circuit’s Tommy Searle – who snared his sixth podium finish of the campaign at Loket – out of the picture in third place in the standings, 105 points in arrears of Roczen. 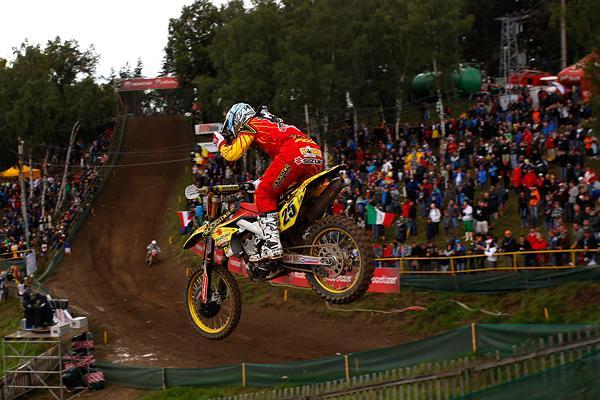 The track at Loket seems to be as old as the hill on which it is sprawled. The nature of the twisting layout means that there might have been some different line options but the difficulty in overtaking was a major gripe for many. That said, the rain on Sunday morning helped ripple the course and forge the occasional deep rut. “When you move to the left and right of this main line it [the bike] goes out of shape and with no grip,” explained Honda World Motocross team’s Rui Goncalves who scaled the MX1 podium for the first time in his career and on a 450 after frustrating maiden term on the 350SX-F in 2010. “This is a part of the championship, and it’s nice to come here. Maybe they can do something [with the track] but the soil is very special and difficult.” 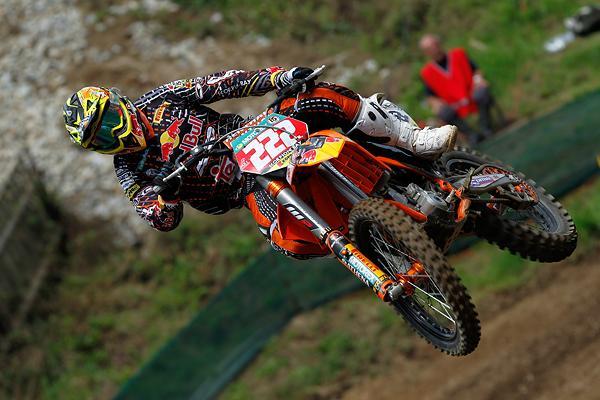 Starts were everything, and this was part of the reason why Roczen and Herlings were able to breakaway in both MX2 motos and Cairoli managed to escape in the first MX1 race. Herlings closed the gap in the second sprint after Roczen’s lap-times wavered. This was apparently due to sweat dripping into his goggles after both the German (who enjoyed a buoyant support from the fans thanks to the circuit’s location on the Czech border) and his father forgot to pad his Fox helmet with ladies panty-liners. Behind the KTM duo two entertaining races for third between numerous riders saw the last podium slot change hands a few times in the second moto with Suzuki Europe MX2’s Valentin Teillet shining on a track he enjoys and on his twenty-first birthday, Bike it Cosworth Wild Wolf Yamaha’s Arnaud Tonus and CLS’ Max Anstie all holding the prize until Searle bustled his way through with an aggressive smash-and-dice through the ruts. Monster Energy Yamaha’s Gautier Paulin was also rapid (kudos also to HM Plant Red Bull KTM UK’s Jake Nicholls who equalled a career-best moto finish) but a first moto engine failure ruined his overall ranking.

Cairoli broke free at the first time of asking in MX1 from Desalle who had to grit his teeth in a race-long plight to overtake Goncalves for second place, which he managed three laps before the flag. However the Sicilian started badly and landed on top of Monster Energy Yamaha’s Steven Frossard causing the latter to crash in the second moto. ‘222’ was then fighting back and like Desalle earlier in the day was anxious trying to find places to demote Christophe Pourcel and team-mate Max Nagl to move into podium contention. Frossard himself was able remount (Shaun Simpson: “I saw Frossard’s crash first hand. Holy shit! He was lucky to walk away from that one”) and his eighth place overall was less painful after Honda World Motocross team’s Evgeny Bobryshev – who was chasing the Frenchman in the standings - DNF-ed the second race after a first corner fall and two engine stalls trying to regain ground. It was not a good weekend for the Russian but at least he was in action. MX1 missed the presence of Steve Ramon (spinal injury at Lommel last week and expected to be out for the better part of at least three months) and David Philippaerts. The Italian wrecked the hopes of the Nations team with his training crash mid-week that led to a set of broken wrists, one of which was still in traction and not due to be operated until almost a week after the accident. Former factory Suzuki rider Kevin Strijbos filled in for Ramon and performed reasonably well (sixth overall) at the track where he gave the RM-Z450 its first major race victory in 2005. 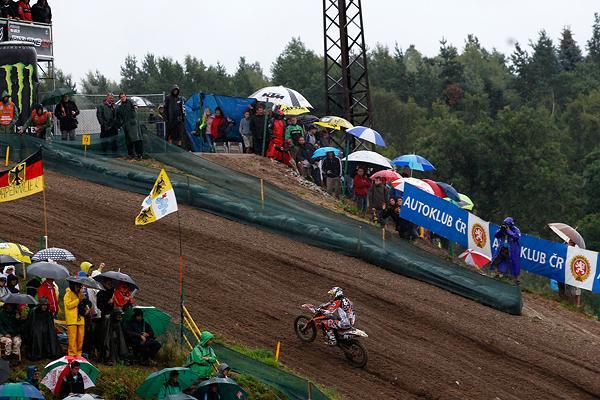 Pourcel returned to the Grand Prix paddock with the CLS Pro Circuit Kawasaki and with half the amount of fuss that greeted his initiation and doomed attempt at Germany last month. This time he was able to complete the motos and his second race revealed shades of the old FIM and AMA champion as he kept the works 350SX-Fs at bay for a substantial duration. “I was racing with Cairoli and Nagl, and it was great to see that I had the same rhythm and I was happy with the bike, especially the suspension,” the Frenchman, who missed out on a late and possibly controversial inclusion on the Nations team (Frossard, Paulin and Marvin Musquin selected) said. “I was strong during both motos; now we have to work on the start as I saw this weekend how competitive and consistent the MX1 riders are.”

A decent amount of anticipation is fixed to round thirteen with the British Grand Prix returning to the site of the ’06 Motocross of Nations, Matterley Basin, in two weeks time. The ‘bowl’ setting is unique on the GP schedule and with the reputation the Brits have for a noisy and atmosphere event it should be one of the best of the season…if the English rain stays away that is… 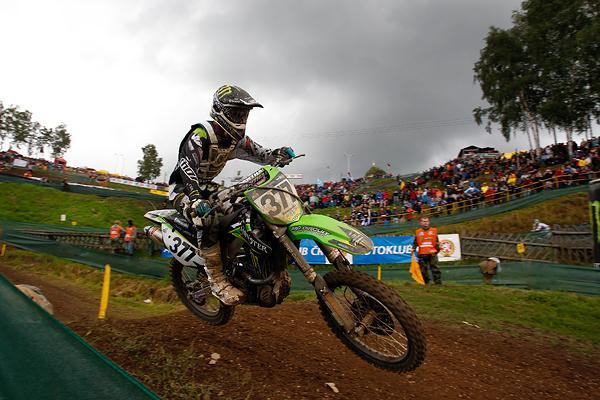 Pourcel made his return at Loket and finished ninth overall.
Photo: Ray Archer