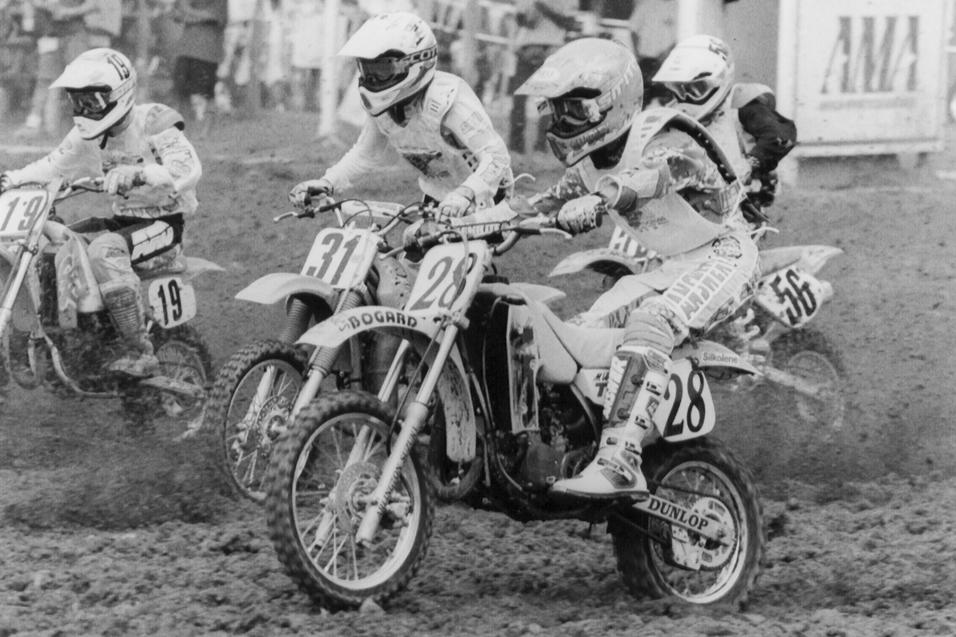 Where Are Charley Bogard

July 29, 2011 3:30pm
by: Nick McCabe
Charley Bogard was a fast kid from Texas who did all the right things. As a kid he rode the wheels off his Suzuki RM80 and was once dubbed the “fastest minicycle rider on the planet” by MXA; he battled with Ricky Carmichael at top amateur events nationwide, turning pro in the mid-1990s. Bogard scored a supercross podium early in his career but struggled with injuries, and he retired from full-time racing in 2000.

Racer X: Hey, Charley, thanks for chatting with us today. I understand you’re out at Ponca City helping out some young racers?
Charley Bogard: Yessir, that’s right. I’m out here coaching a few kids that I work with. It’s always cool to come out to the big amateur events and see who’s doing what. But this event is pretty close to me—I was born in Grand Prairie, Texas, and today live in Wylie, Texas, which isn’t too far from here.

You had a very successful amateur career and turned pro with a number of championships. Give me a little rundown on your career, and how things went once you turned pro.
Well, I turned pro in the fall of 1995, after that one RM Cup that was held [Pleasure Valley Raceway in Johnstown, Pennsylvania]. But my first real pro race was at the 1996 Georgia Dome supercross. I got second place in the 125 main, which was a pretty cool way to start things off. I was expecting some big things but then had some crashes at the next few races and ended up getting hurt a few times, which set me back. But I did the pro supercross tour for four seasons and the nationals for two seasons. It always seemed like I was battling the injuries, which was tough. But what I really liked doing was arenacross. Arenacross kinda started in Texas with Mike Kidd, and I grew up riding it in the wintertime, even when I was on 80s. I raced pro arenacross from 1995 through 1999, with a top finish of fourth in the series. In 1999 I signed with the Suzuki team along with Buddy Antunez, and I was real pumped about that. But then I knocked a hole in my kidney at age 21 while I was testing, and that was pretty much it. I was off the bike for nearly eighteen months, and at age 21, and for being off for that long, I got left behind. 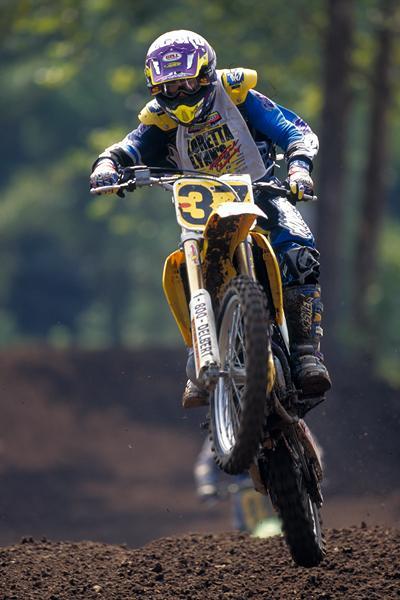 So you quit racing at age 21?
Well, not really. I say I lost my career at age 21, but it’s not entirely the case. I still make my living today with riding dirt bikes, but I’m just not lining up at the start line anymore chasing purse money. There’s always a group of younger kids behind you that the teams can get for cheap. There’s always someone faster that is two or three years away. When I lost eighteen months, it was time for the new kids. It is a tough sport, but as you get older, you just pick and choose the battles, and that was a battle I chose to not fight.

Given your success as an amateur rider, how did you deal with the challenge of the pro ranks?
I try not to look back at the old shoulda-coulda-woulda deal, but for sure, the one thing that I thought about is my injuries. I broke both arms at 17, then at 18 I tore my ACLs. I was just jacked up. After a few years of injuries, no team wanted to hire me full-time, so at age 18 I just started chasing money races with big purses.... I started to hit the little fair races and finding a way to make some money. There were lots of little races in Mississippi, Arkansas, and other areas that paid decent money for a win, so I just traveled around to those, like that race up in Chicago that just went off—that was always a good event. But the biggest thing that finally got to me was the injuries. At a certain point, they were hard to overcome.

What are you up to now?
I’ve actually been doing lessons since 1995. That’s pretty much what I do full-time, especially in the summer when the kids are out of school. Also, my family owns a sign shop, and so I guess I’m a third-generation sign man, but I’m not present in that business all the time.

That’s cool to hear you’re still making a living around riding.
I’m very blessed to do what I love. A lot of kids don’t think about what happens if it doesn’t work out for them, nor do they realize just how hard it is to make it to the top level. Take the NFL, for example. They have sixty-three people on a team and a total of thirty-two teams. Do the math—that’s a lot of possible paid positions, and that doesn’t even include the practice teams! In motocross, we don’t have fifty paid rides. To make it to the top in motocross is real shot in the dark.

Tell me about your wife and kids.
My wife is named Jamie and our two daughters are Annbella May, who is 5, and Ava Grace, who is 2. But I met my wife back near my home in Texas, and she rode as well. In fact, her whole family rode bikes, so she was a perfect fit for a guy like me who makes a living riding a dirt bike. Every year we all take a big weeklong vacation with all our in-laws, and it’s just a lot of fun. We ride, camp, go four-wheeling, and just generally hang out. I’m lucky to have such a cool extended family, for sure! 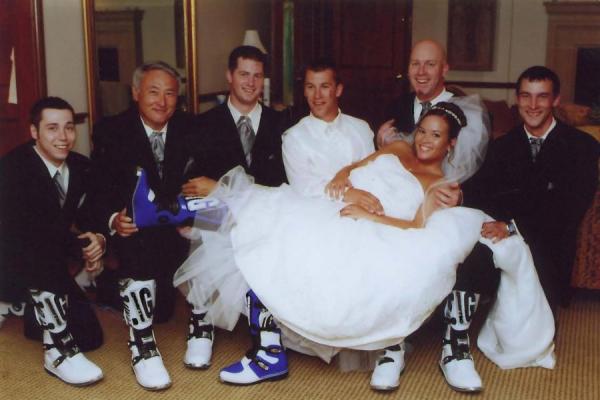 With it being the time of year for Loretta’s and Ponca, and with your success at those events, what are your thoughts on how things have changed since you were racing them as a kid?
Aside from the technology of the bikes—you know, with the four-strokes—I would probably have to say the safety equipment is better. When I was kid, the safety equipment was terrible-fitting. Today it’s much better than it was. But really, everything has gotten better and faster. The bikes off the showroom are just plain fast. But I do think there’s room to go with helmets and they can be a little bit stronger.

What’s your favorite memory from Loretta’s?
I guess standing on that stage and popping the champagne after a win. But also swimming in the creek and swinging from that tree, before they cut it down. But the best part of being a kid racer was training all year for that one race, then going to show everyone what you learned and how fast you got.

You won two titles at Loretta’s. How were those?
Yeah, I have two titles there, but I have a whole bunch more moto wins as well. But with that three-moto format, it only takes one fifth-place to screw you up, and I got screwed up a bunch of times. In 1993 and 1995 I won my titles, though. In ’93 I won every moto I entered, but got DQ’d for having a replacement rim on my bike in the stock class. It was an honest mistake, so that kinda stunk, but the rules are the rules. Then in ’95 I won five motos, but I lost a chain in the final race and got a DNF. But overall, I had a couple of good years there. I had some crazy battles with guys like Carmichael, Bentley, the Hortons, and even Kevin Windham and Robbie Reynard.

How was it battling with RC when he was just a little kid?
You know, a lot of kids were fast, not just Carmichael, but he did stand out, even back then. It was pretty much me, [Broc] Sellards, and Ricky. And he was the kid we all wanted to beat. You never counted him out. But in the end, it worked out good for him, but we were all able to chase him along the way. 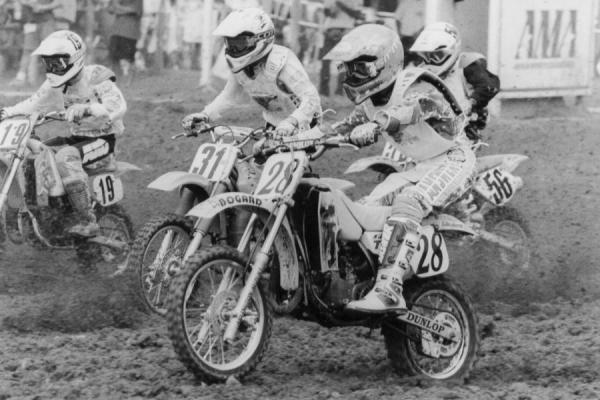 In your mind, what did he have that made a difference when comparing him to some of the other kids of his age?
Total determination. And some luck. In racing it’s hard to say, but you know, you really make your own luck. But RC was real lucky on the injuries. Very few, if any, people have ridden that fast for that long and can say that they only had one surgery. That’s crazy. I bet he has the record for that as well!

What was your favorite memory as a pro?
I would have to say standing on the box with my first supercross podium. That was the best rush ever—and on top of that, hearing that crowd roar at you was real special.

Thanks for your time, Charlie. Anything you want to close with?
Well, I just want to thank the good lord Jesus Christ for letting me ride dirt bikes, and my wife and my parents. My parents have always helped me and been there along the way. I also really need to thank Munn Racing here in Texas. I’ve been riding their KTMs for five or six years and the bikes are awesome. They take good care of me. Also, if anyone wants to get in touch with me, my website is www.motolessons.com.