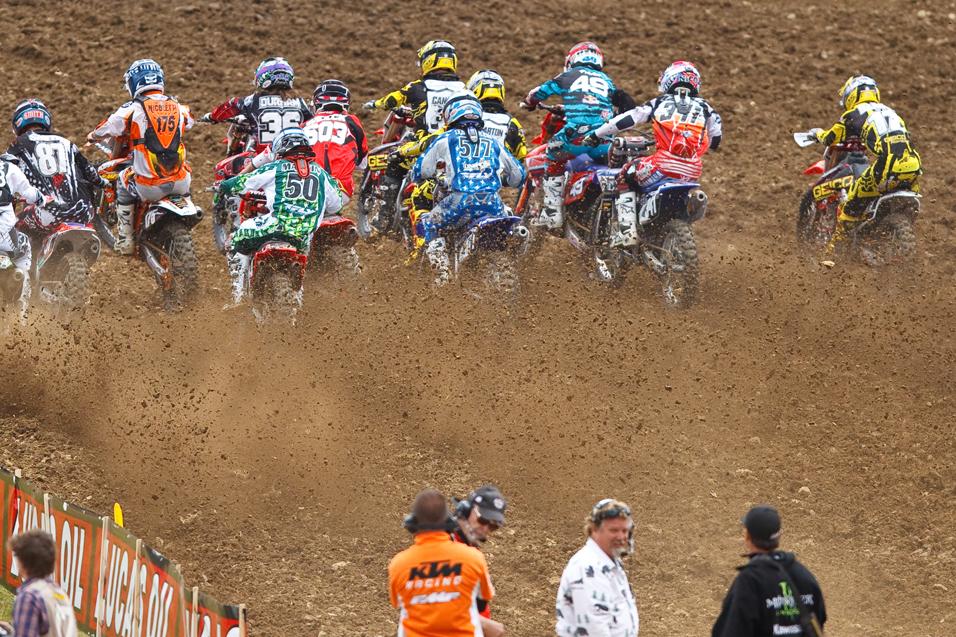 With an epic 2011 Monster Energy Supercross season in the rearview, the Lucas Oil AMA Pro Motocross Championship kicks off this weekend with the same basic thread—contenders are here, contenders are healthy, and contenders are ready. So why shouldn’t we see another great title battle here, too?

To make you sound smart when Hangtown’s first motos hit the air live on Fuel TV, we’ve put together this Spotter’s Guide with an update on who is riding what in the 250 Class this summer.

If we missed anyone, send a letter to letters@racerxonline.com and we’ll get ‘em in.

#17. Justin Barcia: This team won the title last year with Trey Canard. Now it’s on Barcia and Tomac to get it this year. Barcia is coming off of both a supercross title and a wrist injury; we’ll see which one helps and which one hurts.

#19. Eli Tomac: The kid shocked the world last year by winning Hangtown, then blew himself out in the Texas heat. He should be much better prepared for the long haul this year.

#21. Blake Wharton: No Blake this year outdoors—he had to go in for shoulder surgery after supercross.

#31. Wil Hahn: Wil busted his back at Anaheim 1, and then did in his shoulder just a few days into his comeback. He says the goal is to get some races in this summer, just not sure when.

#66. Jimmy Decotis: Decotis was the fill-in for Hahn in supercross and was supposed to fill for Wharton outdoors, but now he’s out, too, with an elbow problem dating back to Seattle. He’ll be back in a few weeks. 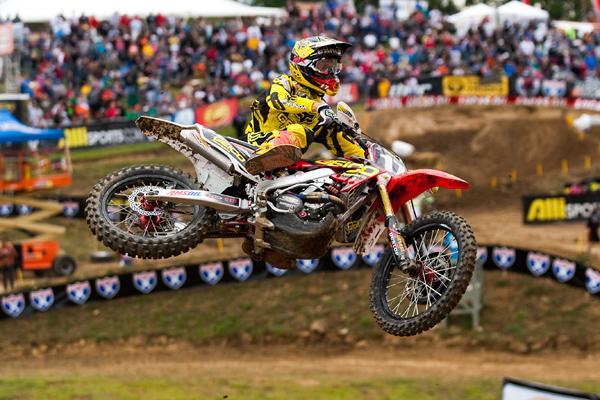 #36. Cole Seely: Big steps forward for Seely in supercross this year. Can he carry the mojo to the outdoors?

#37. Darryn Durham: This Pennsylvanian is always fast and could surprise some folks.

#46. Alex Martin: Always one of the top privateers.

#42. Nico Izzi: Injured foot in supercross, back riding and testing now for an outdoor run.

#44. Les Smith: Rode for the JWR team in supercross but was moving to a different squad for outdoors. But that deal fell through and Les is left scrambling. In the meantime, JWR has already filled additional spots with Ryan Zimmer, who was also on for supercross, and newcomer Seth Rarick.

#245. Lance Vincent- Vincent was the biggest surprise to come out of the 2011 rookie class finishing eighth overall in the Lites East class. Vincent will be the face of this new team and hopes to continue his stellar 2011 season outdoors.

#140. Johnny Moore: Moore traveled with the Moto Innovations team throughout the East Lites series and hopes to continue to improve with the team outdoors. 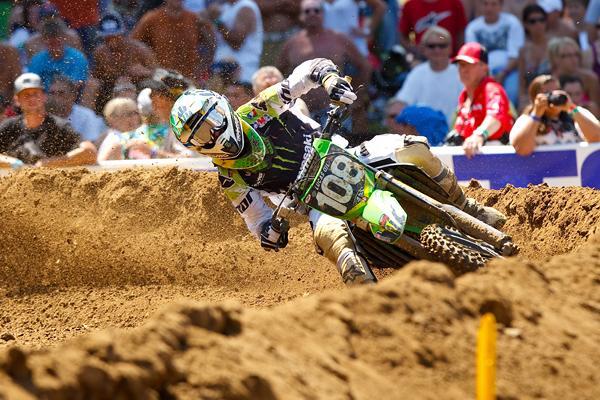 #20. Broc Tickle: Fresh off a West Region SX Lites title comes Tickle, who raced for Star Racing Yamaha last year. He’s a tough guy who is usually even better outdoors than in.

#28. Tyla Rattray: The 2008 MX2 Champion in the GPs, Styla improved greatly in 2010 compared to 2009, and finished second in the final standings when Christophe Pourcel crashed out of the finale. He’s got credentials, for sure.

#57. Blake Baggett: Not many got to see Baggett outdoors in 2010 since he crashed out for the year with a broken arm at Budds Creek. He was fast when he was there, though, and is now armed with one of the fastest bikes in the class.

By the way, Josh Hansen is on a supercross-only contract, so you won’t see the fifth Monster/PC/Kawi member outdoors.


#49. Ben Evans: The Idaho native finished top ten in the Western Regional Lites series and enjoys being the underdog.

#812. Bryce Vallee: The former Yamaha supported amateur rider was injure during the Lites SX season, but will be 100 percent come Hangtown.

Privateer
#48. Matt Lemoine: Lemoine had one his best seasons of his career in Supercross on his privateer backed Kawasaki and looks to bring that momentum with him into outdoors. 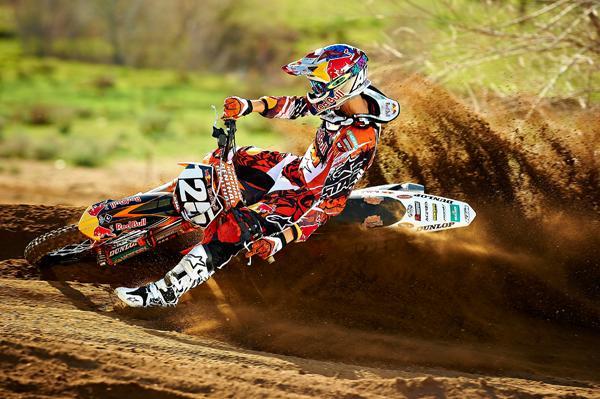 What will Musquin bring to the table in 2011?
Photo: Hoppenworld.com

#125. Marvin Musquin: The Frenchman is coming off of the 2009 and 2010 MX2 GP Championships. He missed supercross with a torn ACL suffered at the Paris-Bery SX, but he’s healed and ready for a run at the U.S. crown.

Ken Roczen is racing the GPs (and leading the MX2 class in points) so you probably won’t see him racing any motocross in the U.S. this year.

#927. PJ Larsen: The Peej is back in the U.S. after a season Down Under. Unfortunately, he broke his navicular in supercross and says his wrist is still sore. Hopes to be back by High Point.

#25. Ryan Sipes: Sipes rode a 450 with some success outdoors last year, and then really hit his stride back on a Lites bike in supercross. Is his first outdoor win next?

#35. Kyle Cunningham: Cunningham has bounced from one team to another over the past few seasons, but he seems to have found a good home at Star, and his speed is definitely good enough to run up front this summer.

#387. Gareth Swanepoel: You didn’t see much of this South African in supercross (due to injury), but he’s a GP veteran who does his best work outdoors, anyway. 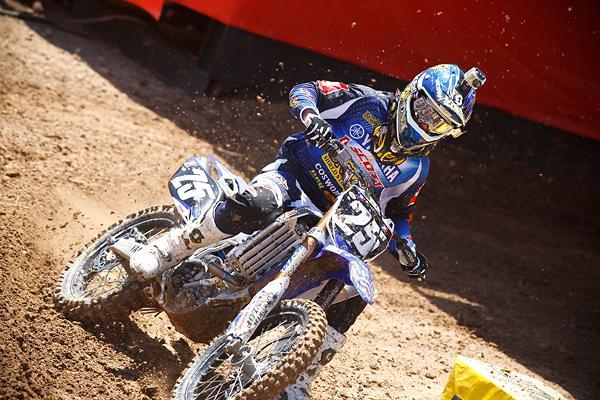 Sipes is coming off a career best SX season, will it help him outdoors.
Photo: Simon Cudby

#23. Martin Davalos: Veteran struggled more than he would have liked in supercross.

#71. Ryan Morais: Morias just took care of some nagging injuries with surgery, so you may not see him this year outdoors. Poor Mo, this seems to happen every year!

#156. Jason Anderson: Rookie didn’t do what he wanted in supercross, but says his style works better for outdoors, anyway.

#139. Malcolm Stewart: Rookie Mookie is in for the summer, paired with 450-shod Jason Lawrence in the Suzuki City truck. Should be interesting!