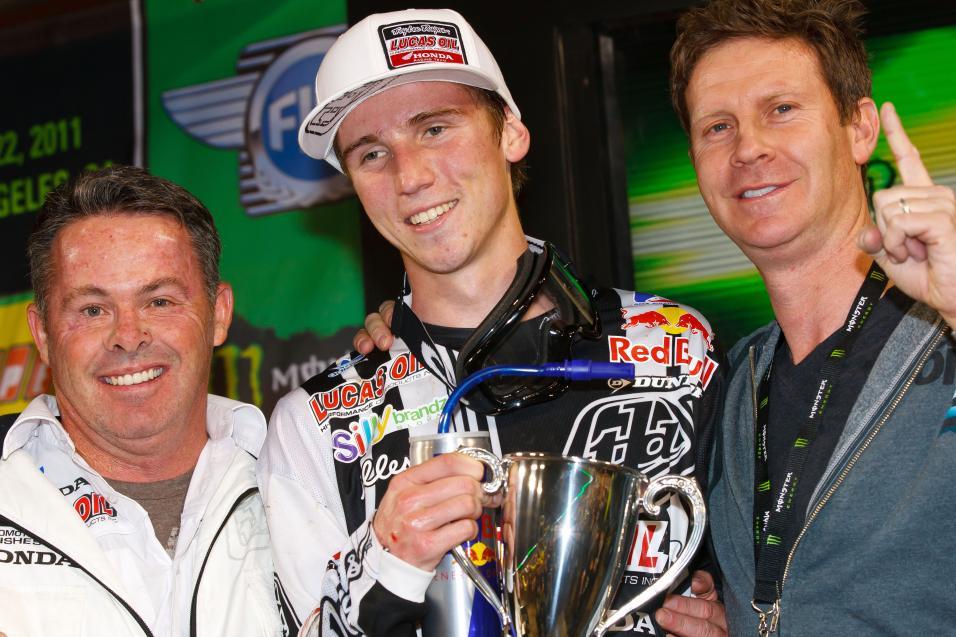 Cole Seely is making the big jump this weekend to a 450 with American Honda Racing, in a replacement ride for Josh Grant. How did he climb so far, so fast? We talked to his agent, Brian Siegrist, for a behind the scenes look at the business.

Racer X Online: How did you get started with Cole?
Brian Siegrist: Cole is 21. I met him when he was 12. One day I was out riding on my 250 and this kid went blowing by me on an 85. That was Cole! I’ve been helping him out ever since.

Two years ago hardly anyone knew him. You’ve got a diamond in the rough there.
He had success early on, with 50s and stuff. You know what's funny, Tony Alessi was the one who taught Cole how to ride a dirt bike. They go way back. There was a point where he got burnt out on it along the way. I think the interesting thing about Cole Seely is he has so much natural talent, where as most of these guys have to really work on it. So the potential has always been there, talent wise, but he had to take some time off when he was younger before he decided he wanted to make a career out of this. So I reached out to Mel Harris, who was the president of Suzuki at the time, and they gave him two Suzukis, and he went to work. He signed on with Fun Center Suzuki team, and they helped get him through his first year of supercross in 2009. 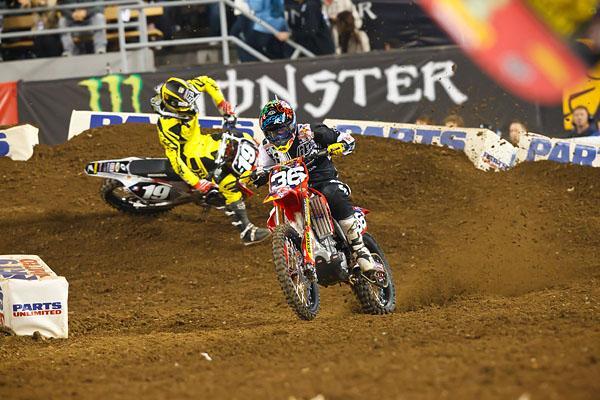 Seely will be filling in for Josh Grant for the next few rounds.
Photo: Simon Cudby

Well, I remember hearing Cole’s name in 2008, but only for a strange reason. High School Musical’s Corbin Blue was down at Loretta’s that summer promoting his Freestyle movie, and he was really pumping up Cole.
Yeah I was handling all the product placement for that movie, so I got to know Corbin. He needed to learn how to ride, so I hooked him up with Cole. They built a friendship. That even led to, if you remember, this Honda deal is Cole’s second factory ride. Back in ’09, Fun Center didn’t have the money to send Cole to all the races outdoors. I had always talked to Roger (DeCoster) and Roger really liked Cole. He called me saying he wanted Cole to fill in for Nico Izzi at Budds Creek, and that was perfect for us because Corbin was there promoting Freestyle, so we got some TV time.

Cole really took that day seriously. He had trained so hard. It was a huge opportunity for him, and I think he just put too much pressure on himself. He was so upset after that race because he didn’t show his true potential.

I don’t think many people were counting on him to get to this level after that race.
I think the interesting thing about Cole is, I look at all of these kids who had all this success in the amateur ranks. There were some big names when he was racing in 2008 at Loretta’s, and I like all of those kids, I wish them well. But I’m not worried about any of these guys anymore. It’s all clicked for him, he’s not burned out. It’s a combination of all the guys on the team, the TLD team is so laid back and fun, it’s the perfect atmosphere. I don’t think he’d have the same success if he wasn’t on Troy’s team.

How did he get the TLD ride?
Christian Craig got inured, so I called up Ping and Troy and told him to give Cole a look. Wardy called and helped out, too. So they signed him on for SX, and they said if he did well they would keep him on. So now they’re so pleased that they’ve signed him for 2012 and 2013. I will sum it up like this: If Cole doesn’t win another race this year, it doesn’t even matter that much, because he won the big one: LA. With all the celebs that were there, all of the hype, he won it. He perserved and made it happen, even with Hansen trying to take him out. I’ve seen a big difference. In his first supercross in 2009, Sleeter took him out. Now, if you try to take him down, he’ll take you down with him.

So he signed a two-year extension with TLD. But if he has another good year next year, he’ll point out of the Lites class. What’s the plan there?
I’m sure if it came down to it, Troy would let him out of it if a great 450 deal came along. 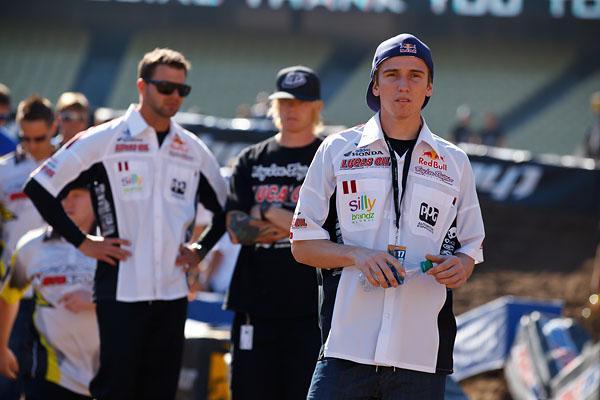 Seely just signed a deal to keep him on the TLD team until 2013.
Photo: Simon Cudby

Oh, I thought maybe this was TLD prepping for a run on 450s indoors.
Well, all I can say is never say never. I can’t believe you got that out of me, Jason. The other thing is, Cole gets this as a business. I think one of the most interesting thing is, we had a deal with Under Armour. Cole was the only guy in their supercross action sports vertical who had them. Unfortunately we couldn’t stay with them because TLD signed a deal with Adidas, which is fine. We have so many other things going. He’s got backing from Silly Brandz, the parent company for Silly Bandz. That’s a $240 million company, and now they’re interested in action sports thanks to Cole. He’s had Rock and Republic jeans. Cole is affiliated with Crunchies Food, it’s freeze dried healthy fruit products. There’s a huge event in Anaheim this weekend called expo west, and we went last year and brought a bike. He gets it.

How do you make these deals?
I think it’s my relationships from previous jobs. And I don’t wait. I pick up the phone and make cold calls. Companies like that, like Apple for example, they don’t make quick decisions because they’re big companies. But I don’t want to just go to the same companies—let’s call up Oakley, let’s call up Red Bull and ask for money. Duh. A two-year-old could think of that.  Cole has a deal with Chipotle, we can’t run the logos because of their green movement, but Cole loves Chipotle. They hook him up. Also, Cole is big into drifting, he’s really good at it. He’s sponsored by Illist, which is huge in the drift world.

What previous jobs did you have?
I worked for GE, Lehmen Bros, Bear Stearns. I was in the wholesale banking business.

So what drew you to motocross?
Well I’ve been riding since I was a kid. It’s fun for me. This sport isn’t how I make my living. I have a lot of people who say, “Can you help my kid? I want you to do what I did with Cole.” But I don’t have the bandwidth for all of these people. The sun the moons and the stars aligned, and then we had Cole Seely. There’s always been something special about that kid. I’m not just grabbing anyone that comes along. Other guys have a rockstar mentality and their careers are in the toilet right now. Cole will never turn a fan away. He gets it. He’s quiet, and he yells at me because I’m the mouth piece for him. But I’ve been telling you for years, these guys get these attitudes like they’re better than anyone else, and Cole never gets like that.

Now he’s on Team Honda for four races. How does this work?
Kehoe called him and asked, (TLD Team Manager) Tyle Keefe and Troy talked about it. We can’t thank Lucas Oil enough for helping us. He’s still a Lucas TLD athlete even though he’ll be riding for factory Honda. 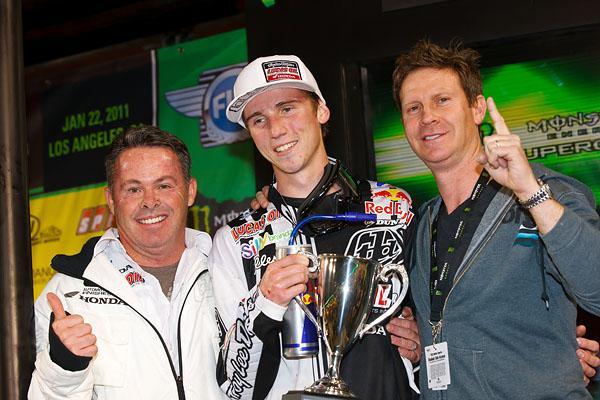 Anything else going on?
Oh absolutely. I’m working on potential big electronics deals. You name it, I’ve called them. These companies don’t react overnight—but he sends the right message. He’s not a tattooed pierced up guys in the pits. He’s clean cut, he’s good looking and he’s got a good attitude.

Is this a personal challenge?
No. It’s just what I know. I get enjoyment from elephant hunting. I don’t hunt for squirrels. I don’t go for the low hanging fruit. And I think that’s what Cole likes about me.

Anything else in the works?
Okay, I’m doing some work with the Kardahians, we did a Kardashian Sily Bandz pack, along with a TLD pack. Because of my relationship, we were doing a release for the Kardashian Glam Pack. Kourtney comes up to me and says, “Hey Brian, I heard [her dad] Bruce [Jenner] had a great time at the supercross. Well my boyfriend Scott wants to go to a race.” So I got her boyfriend into a race, this is Scott Disick, big star on Keeping up with the Kardashians, and he went to a supercross and loved it. Now Cole has all these tie ins to young Hollywood. I like Hansen, he’s a badass, but Cole is like the hipster. You have to have all of that. Now we’re working with Larkin Rivero, they’re business managers. They control the financial end for celebs business affairs. It’s wealth preservation. Dan Rivero, one of the principles, had never been to a supercross, he came to Dodger Stadium and watched Seely win the race.

Okay Brian, good luck to everyone this weekend.
Thanks, Jason.