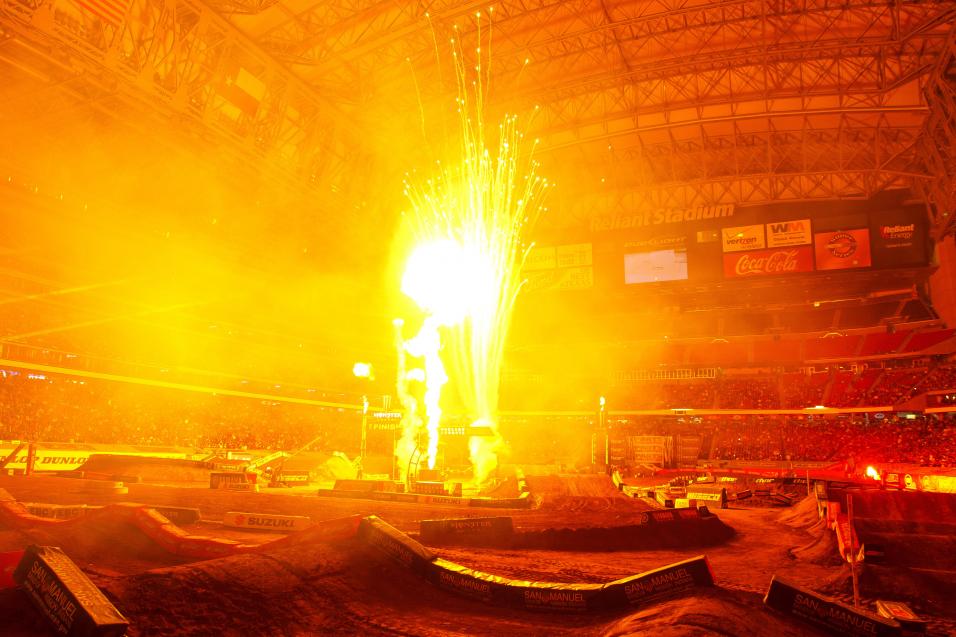 I am writing in hopes of gaining some of your infinite wisdom in the ways of the world of women and motocross bikes. For some time now I have suspected my wife of cheating on me with a fellow MX'er. The usual indicators were there; staying out late "with the girls,” when the phone rings and I answer, the caller hangs up, etc. As much as I try to stay awake I usually fall asleep before she gets home. The other night I decided to hide in the garage behind my trusty CRF450R until she got home. Well, she rolled up around midnight. She got out of someone's car buttoning her blouse, and then she took her panties out of her purse and slipped them on. It was at that moment, crouched behind my trusty CRF450, which I noticed a hairline crack in the sub frame.

Is that something I can weld or do I need to replace it?

Hope you can shed some light.

Man, you really had me worried there, Jeff! For just a moment, until you specified, I thought you were going to say something shocking, like, you noticed a hairline crack in your cases. The good news is that your sub frame is easily fixable by a competent welder and the cost should be reasonably low. The bad news is that your wife is most likely a cheating whore. Have a nice day!

Ping,
One of the biggest stories in SX and nobody is touching it. What gives?

Somebody in the mainstream moto media needs to do a story/interview with Damon Smith (that #490 guy). Regardless of whether you think he belongs or doesn’t belong, the guy is one fascinating cat!

PS: What ever happened with your pal Jiri Dostal after that gnarly crash he had? Is he fully recovered? Can he still ride?

Fascinating indeed. The first time I saw him was at Anaheim 2 where I was working with the Asterisk Medical Unit staff. Someone pointed to him and said, “Keep your eye on #490. He’s going to crash sooner or later and you’ll have to pick him up.” So I watched. And it was obvious in the first five seconds of watching that he didn’t belong on a supercross track. He wasn’t jumping both triples, he rolled through the whoops and he wasn’t jumping all the way over the finish line jump. There are lots of guys that show up and give it a whirl only to be told to come back and try again next year. Only nobody was saying anything to him. He’s been racing the entire west region series. I checked out his website, themxshow.com and even his personal site, damonjsmith.com and read through his bio. He played college football at Utah State on a scholarship and played one year on a Canadian League team afterwards. An injury forced him into the business world where it sounds like he’s done pretty well. He even wrote a book titled, Don’t Stop the Swagger. Damon seems like he’s very well-educated and a really cool guy. He really does. I just think it would be in his best interest, and those on the track with him, if he spent this year tweaking his SX skills and made a good run at it in 2012. Because, and you can trust me on this one, if there is one thing that will stop your swagger it’s a face plant into the dirt off a supercross jump.

Guess what? I found pictures of Justin Barcia and his two brothers! Too bad I can't find a picture of them all together, but these photos make it pretty clear that they are all related.

A moto fan from Canada

I love bad hair choices. I love them. This is the stuff that makes me giggle in the middle of the day when I think about it. That freaky little chin beard that Justin is rocking looks like it came straight out of a Jacobim Mugatu Halloween costume. And the hair looks like a mix of The Goat Boy from SNL or that satyr, Mr. Tumnus, from the Chronicles of Narnia. Either way, Justin would have benefited from a trip to anyplace with scissors before last weekend. Maybe he had a bet that he couldn’t shave or cut his hair until he got a win. I’m really glad he won in Houston.