Soft dirt made for an interesting night in Louisville for round 8 of the AMA Arenacross series. The track got gnarly, faces and landings of all the jumps covered with ruts, and the longest set of whoops the series has seen this year. With more floor space to work with than usual the track crew added an additional rhythm section into the mix for the race at Freedom Hall. 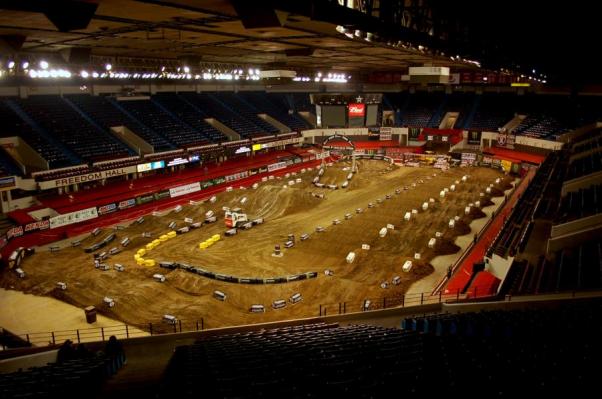 Coming into the night Tuf Racing Honda’s Jeff Gibson had a three point advantage over Babbitt’s Monster Energy/TiLUBE Kawasaki rider and Kentucky resident Tyler Bowers in the series points. It seemed as though Bowers had the track dialed in coming out of day qualifiers with the fastest lap of the day.

The first heat race win belonged to Foremost Insurance/Spinechillers Racing/Hondaoffairfield.com rider Zach Ames. Ames had the pace all day long coming out of the day qualifiers with the second fastest lap. Gibson managed to mount a solid charge and fight his way up to second. Heat two went to Gibson’s Tuf Honda teammate Cole Siebler, Bowers settled into a solid pace once he got in to second and remained in that spot to the checker flag.

When the gate dropped on the 25-lap main it was all Gray Davenport aboard his Babbitt’s Monster Energy/TiLUBE Kawasaki. Gray would lead the first lap before Gibson took over the number one spot. Bowers managed to get around Davenport and put his head down to catch Gibson on lap seven. The two battled it out for two laps before Bowers dropped the hammer. He settled into a solid pace and got out to a five second lead. 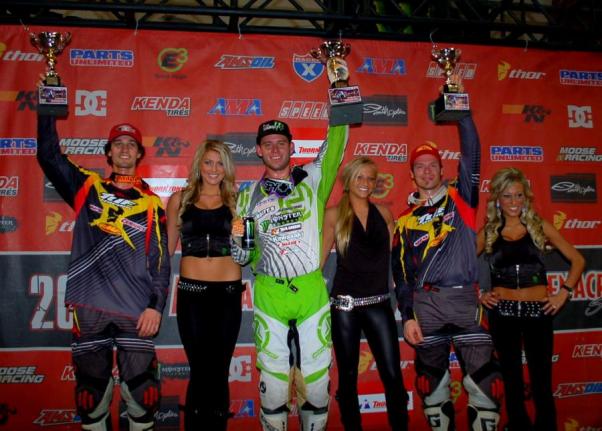 The story of the night had to be Siebler. After getting pushed wide on the holeshot Cole went to work and made his way up to fourth, only to stall his bike making the pass on Davenport for third on lap eleven. The Tuf Honda rider quickly restarted and only managed to lose two spots. He wasted no time getting back to work as he pushed his way up to third and set his sights on Gibson. He made quick work of Gibson and started reeling Bowers in but ran out of time.  Gibson went on to finish third, and Tyler Bowers took over the top spot in the points standings heading into next weekend’s round in Reno.

In Lites action West Virginia native Austin Coon had the night he’s been looking for aboard his Hot Rod’s Racing Honda. After a few weekends of bad luck, he finally put together a solid main event and took his first AMA Arenacross lites win. Finishing second was the Gateway Cycles/Trentman Racing Kawasaki of Steven Mages. Mages put on a solid charge but wasn’t quite able to match Coon’s pace. Foremost Insurance/Spinechillers Racing/HondaofFairfield.com rider and heat race winner Patrick Massie ended up third, and took over the Eastern Region points lead.