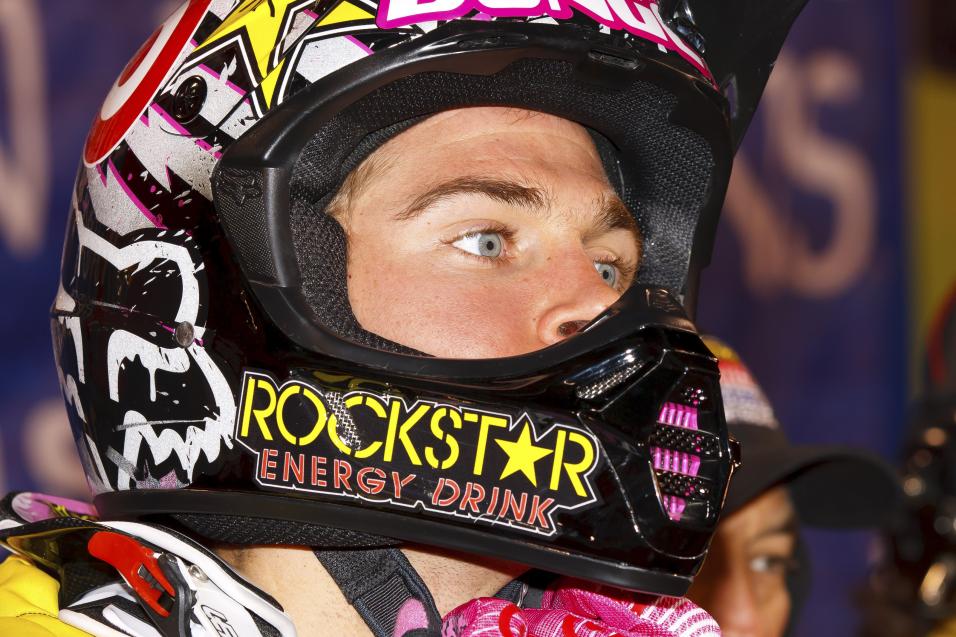 10 Things For at Houston

This weekend the 2011 Monster Energy AMA Supercross tour heads east into Texas for the sixth round of AMA Supercross and the opening round of the East Region Lites class. The 450 race will air on CBS on Sunday at 12:00 (ET), with the Lites airing on SPEED TV at 4:00 (ET), and you can count on the Racer X Online team to lead the way in live updates, Twitter reports, and videos. Here are 10 things to watch for in Houston.

1. Ryan's Rebound: When #1 Ryan Dungey's race came to a halt after his chain came off, it marked an unlikely end to his first month as reigning series champion. He also lost an entire race to Stewart and Villopoto. How he bounces back this week could go a long way to determining how this whole thing turns out. He also has the reinvigorated Chad Reed to worry about!

2. Practice Doesn't Make Perfect. Anyone else notice how little James Stewart actually practices on race day, only to go out and be the fastest man on the track as soon as the gate drops? It's a testament to his skill and natural ability, as well as a way to psyche out his competition somewhat. You can look for him to be fast in practice but not out there very often. That goes against most racing theory.

3. Mookie’s Debut! No doubt one of the riders closely watched this weekend no matter where he finishes is Malcolm Stewart of the ARMA/Suzuki City team. James’ younger brother has been in a big shadow for much of his career, and after a series of injuries as an amateur, he’s finally making his pro debut. The buzz is that he's been pretty good during the week, and many people will be looking at the #139 Lites rider to see if he’s got any of the things that makes James so good. 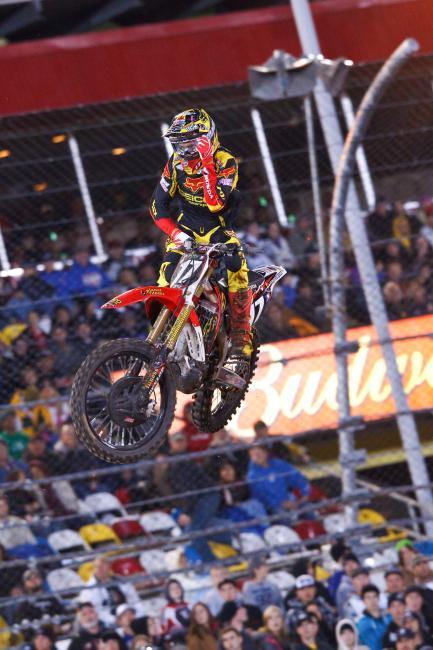 4. Barcia Barcia Barcia! It's going to be interesting to see if GEICO Honda's Justin Barcia has calmed down a bit and can focus on just riding. Last year, the #17 came out blazing and left many other riders (and himself sometimes) on the ground. It got so bad that Honda manager Erik Kehoe had a little talk with "Bam-Bam" to assure him that he's more than fast enough to win without the aggressiveness that got him in trouble. It's a fine line for the wild child to straddle, and in his third year, let's see if he's gotten smarter—because we know he's probably gotten faster as well.

5. Lites Sleepers. There are a handful of riders who, although they’re not on a major factory-support team in 2011, have a legit shot to win Saturday night. They include Darryn Durham, Alex Martin, Nico Izzi, Les Smith, and Matt Lemoine. And don’t forget, this will be the pro debut of Brandon “B-Mayzee” Mays.

6. Wilson! Dean Wilson should have won three rounds of the Lucas Oil AMA Pro Motocross Championship as a rookie last summer, but he gave one win away—the one in Texas—when he mistook his competition for lappers as he cruised around on the last lap. Now he gets a shot at winning his first SX main in the same state. If he's leading this time, here's betting he doesn't slow down until it's time to ride up on the podium.

7. Watch for Justin Brayton. Seriously. This guy has been nipping at the podium, winning heat races and putting together a solid year. Sadly, nobody has really noticed. If the “Big Four” slip just for a second, Justin “Realtree” Brayton is going to be there to steal his first podium. 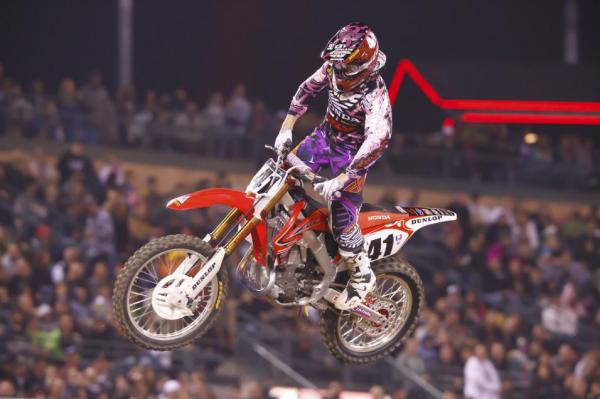 Can Canard get a start in Houston?
Photo: Simon Cudby

8. Different Dirt. Houston marks the first race outside the states of California and Arizona, and with that change comes a change in the texture of the dirt. It's nothing radically different, but it should have a bit more traction by the time the main event comes around, and it might even rut up a bit. Look to see who does better this weekend (Davi Millsaps?) and you'll have an idea if anyone will turn it up once the series really heads east.

9. Canard's Start. The Okie from Phanokie hasn't been at the front for the last few races due to some horrible starts, and Trey Canard isn't good enough at coming through the pack to give away valuable seconds at the start. The #41 Honda rider has the speed to be right there, but he desperately needs to get the start this weekend before he starts to lose touch with the front-runners. (Bonus: Watch him closely in opening ceremonies—he may do a triple first-pump, or even a heel-clicker!)

10. The Roc. This has been hammered into the ground all week from pundits across the industry, but really, who isn’t ready to see what this German kid has to offer in the Supercross class? Ken Roczen has decided to race a 350 for the first time. And watch out to see if he tops teammates Andrew Short and Mike Alessi—can you say media firestorm?