This weekend marked the first-ever Supercross event held at the famous Dodger Stadium. The rider’s and fans enjoyed the new stop on the AMA Supercross tour that brought in a crowd of over 40,000 motorcycle enthusiasts.

Short had a great start to the day qualifying 9th fastest in timed practice. His quick practice time awarded him a decent gate pick in his heat. Unfortunately, he got a bad jump off the gate and rounded the first turn in 15th. Thanks to years of experience he quickly maneuvered his way inside the top ten and was sitting in 8th position at the end of the first lap. On lap three he passed JDR/J-Star/KTM rider Tye Simmonds for 7th position and kept a consistent pace to qualify 7th into the main.

Short’s Red Bull/KTM teammate, Mike Alessi, had a decent heat starting in 8th position and maintaining that spot through the checkered flag. “After crashing last weekend and going to the LCQ, I was glad to have an easy heat race this weekend putting my KTM 350 SX-F into the main event,” remarked Alessi. 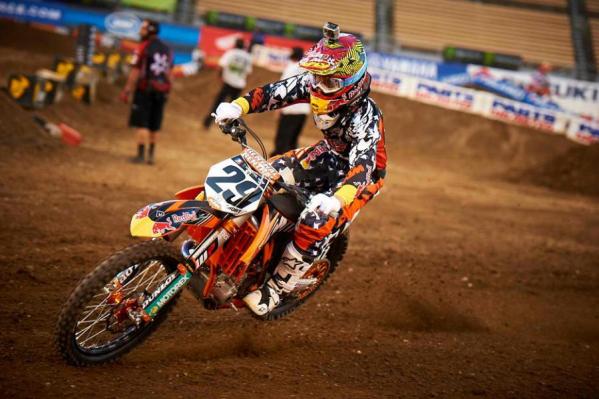 The crowd was in high spirits as the riders lined up for the SX main event. Both Short and Alessi reported that the moisture was coming out in the soil and had made the track more slippery which had changed some of the lines and jumps they were able to do in practice and the heats.

When the gate dropped Short came around the first corner in 8th position with Alessi a few spots back in 12th. On the second half of the track Short was passed by Ryan Villopoto and dropped to 9th position as they crossed the finish line jump of lap one. The first half of the race was a nine-rider freight train with Shorty at the tail end of the pack.

On lap three, Short closed in on the 8th place ride of Austin Stroupe. After pressuring Stroupe for two laps he made a clean pass to gain the position and set his sights on Brett Metcalfe. It appeared that Short would catch Metcalfe as the race continued but pressure from Chad Reed caused Short to become defensive of his lines and lose time on Metcalfe. Reed was able to make the pass on Short with a couple laps to go. Short eventually finished the race in 9th. Alessi hung on to finish 17th.

“I’m disappointed that I wasn’t able to hold Reed off at the end of the race, but happy to still finish inside the top ten. This week I worked with Sebastien Tortelli and he gave some great race advice throughout the day. We also made a lot of progress to the bike which helped my performance in the main event. I am happy with the direction everything is going,” remarked Short.