The Australian JDR/J-Star/KTM Team had its best race this season with Ryan Marmont finishing inside the top ten in the heavily-stacked Lites Supercross class and SX rider Tye Simmonds qualifying for his first U.S. Supercross event aboard his KTM 350 SX-F race machine.

Marmont had an eventful day filled with many highs and lows. He garnered a decent start in his heat race only to become involved in a first lap crash that put him at the back of the pack. At the end of the six lap heat he was unable to move into qualifying position and was forced to go to the LCQ.

“The LCQ ended up being a blessing because it gave me more track time. The track was changing so much between each session that I was thankful for the extra time on the course. I was able to find lines in the LCQ that helped me in the main event,” remarked Marmont who took the final qualifying position from the LCQ to the main event.

As the gate dropped for the main event, Marmont got off to another impressive start inside the top ten. “It was mayhem out on the track. Riders were running into each other and crashing all over and I was just trying to remain safe and use patience to avoid hitting the ground myself.” Marmont chose his lines wisely and shortly into the race capitalized on a crash that took out three of the top five guys and moved Marmont up to 5th place. He reported, “I came around the corner and saw all these guys down and just took full advantage.” 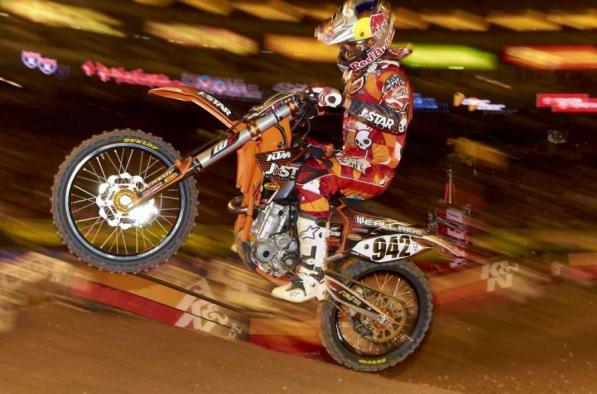 Marmont held 5th position for the majority of the race. With only a few laps to go, Josh Hansen and Ken Roczen (who were both involved in earlier crashes) had worked their way up behind Marmont. “I tried to hold my lines and keep my speed as best I could as they began to pressure me. I got tight when they closed in and made some mistakes that opened up a gap for them to get around me.” Marmont eventually finished 7th overall marking his best performance so far this season.

“My goal has been to finish inside the top ten and I was able to surpass that today by finishing 7th. I would like to continue my progress and hopefully shoot for a top five finish within the next few rounds.”

Simmonds received a lot of attention from his team after qualifying 8th in his heat race to qualify for his first-ever U.S. AMA Supercross race. “I have been so close the past two weekends and I was finally able to put it together today. It feels good to finally give back to my team by putting our bike in the main event,” remarked Simmonds.

In the main event, Simmonds had a bad jump off the gate but squeezed his way through to come out 8th by the third corner. Simmonds lost a few positions on the next lap and eventually settled in 12th without losing too much time to the riders in front of him. He was able to pass one rider and gained another position after a rider went down to eventually sit in 10th. Simmonds held 10th position for the first half of the race until he began to suffer slight mechanical problems that forced him to ride more cautious on the last few laps.

“I had a crash with Kyle Regal at the end of the race and a few mechanical issues that sent me back in positions. I was really happy with the start of my race and am still happy that I qualified. I just wish I could have finished a bit better where I thought I belonged. Hopefully next week I can continue to improve and run with the top guys.”