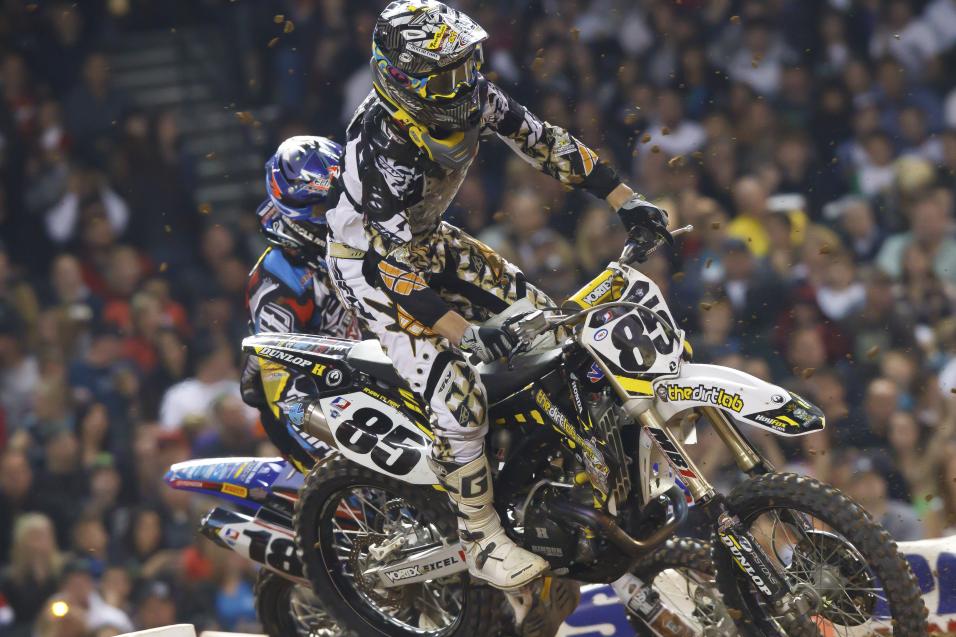 I am quite sure that Ryan Clark is a real nice guy and a very competent rider, but I cannot ever remember a single rider causing so much chaos (with Windham, Dungey, Tedesco and almost Villopoto) as Ryan did at Phoenix. I hate it when a lapped rider becomes a determining factor in the outcome of a race. Maybe the AMA should have a special seminar before each race on how to be a better (and therefore safer) lapper. Any thoughts? Also, do you think the KTM 350 is adversely affecting Andrew Short's results? What is KTM's thinking on this? If less is more, why not just race a 250 or a 200 or a 125 or an 80, etc.?

PS. Do you ever gett sicke of all the mispelled wurds in the quesstions you git? I atcually fine then entertaning

I understand lappers getting in the way (inadvertently) if they are racing for position. Sometimes the leaders lap well into the field and a guy racing hard for sixth or seventh can be getting lapped and not even realize it. Would you think it was the leader behind you if your pit board said you were in seventh? Probably not. Ryan is indeed a nice guy and a great rider but it really seemed like he forgot to flip the “on” switch in his brain before the gate dropped last Saturday. He couldn’t have done more damage in that main event if he were standing in the middle of the track swinging a battleaxe at riders as they went by. My guess is that he was trying to be amazing in front of his hometown crowd and things backfired on him. Big time.

I think KTM will get the 350 sorted out. Short said they are working on moving the power around and getting it to a more useable place. His results have been getting better and better each time out. What was KTM thinking? Have you ever ridden a 450 on a tight supercross track? It’s like doing a gymnastics floor routine in your bathtub. The 350 is more nimble and easier to control. I think it’s pretty early in the process to determine whether or not this project was a mistake for professional racing. It sure seems to be working for Cairoli in Europe.

Just when my group of “anything that has to do with a ball” sport fanatic friends start to recognize that Supercross may be tougher than water ballet, freaking Speed Channel throws on a Monster Truck/Supercross comparison, during the Phoenix Supercross.  It took us back 100 years and I began to receive the normal remarks such as, “Motocross requires no skill,” “It’s as physically demanding as Bowling,” “We are all considered rednecks”…etc.  Who was the Rocket Scientist who came up with that segment?  You think they could have compared it to a Marine boot camp, Boxing, or Soccer but no.  Instead, we have been linked to a circus sideshow featuring a bunch of 50 year old Truck driving, Busch drinking, pork rind eating Hillbillies.  What’s next an ATV/Supercross comparison?

That was sickening. And the suit-and-tie crowd at Feld probably thought it was a nugget of marketing genius. And it probably was. From what I understand the Monster Jam events make them waaaaay more money than supercross. I defy you to find me one of those truck driving, Busch-drinking, pork rind-eating hillbillies that don’t have a Grave Digger tee shirt in the closet of their filthy singlewide mobile home. And, sadly, there are multitudes of those folks just lining up to buy their kid an El Toro Loco beer cozie and cigarette lighter. It’s all about the merchandising, Garrett.

I've noticed you've stopped running your Leatt? What's up with that? Care you enlighten as to why you stopped wearing it? And not only you, but:
McGrath - Who broke his back, started wearing one, then tossed it.

Reed - Tossed it....Tweeted or Twatted something along the likes of "Not sold on the idea anymore?"

Sleeter - The first person to qualify for a SX with one, and now he's stopped..

Grant - I guess the General isn’t down with neck protection?

Townley - If anyone needs one it's him.

Cunningham - His sister works for Leatt for Pete sakes

I'm sure there are a crap load more who have stopped. Care to enlighten us as to why you stopped wearing it? And speculate why others have thrown them to the wayside?

P.S - Big Bore Barry Carsten always ran an 188cc RM 125..... It’s common knowledge here in Jersey. Him and his ratty ass bikes, his lovely wife and her sick mullet, and his stock pipe and silencer pulling top five starts at the Nationals and SX... Yeah, it could happen

I’ll never forget getting pulled by “Big Bore” down a deep, deep Red Bud straightaway and tripping out on it after the moto. Then I checked out his bike and saw he had a stock pipe on as he rolled it to the line for moto 2. Classic. Anyway, on to your question… I haven’t given up on neck protection. I’ve been going back and forth between the Leatt and the Alpinestars brace for the past couple years and there are things I like about both. Occasionally I don’t wear one at all, usually when I am shooting photos or video, but the majority of the time I do wear one of them. I can’t say for sure why different riders have abandoned the devices except to say that it is more comfortable not wearing one. Period. That doesn’t mean it is a good idea. There has also been some speculation about the effectiveness of the various devices, but there are also people that will argue that smoking isn’t bad for you. Something that comes with being young is a sense of invincibility and it isn’t just mythical, it’s a physiologic fact. There is actually a segment of your brain that isn’t fully developed as a teenager and it is the part that makes you stop and go, “Hey, if I do this it could end up killing me. Maybe I should stop and rethink this for a second.”

So, lets just blame all this on underdeveloped brains and keep wearing our protective equipment, shall we?