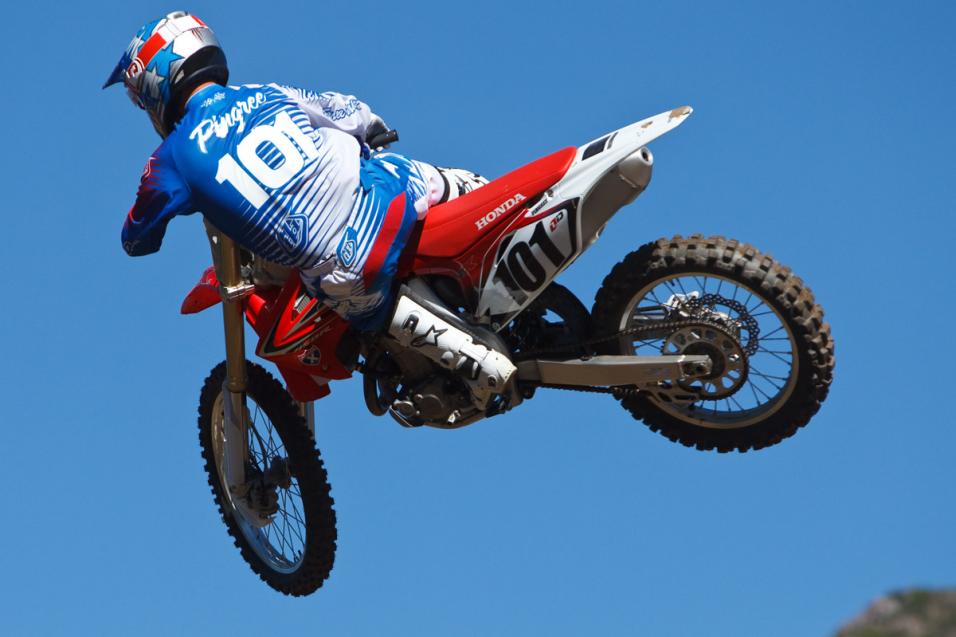 January 14, 2011 11:00am
by: David Pingree
Hi my question is that since you know so much about dirtbikez and anser all these questions and what not, why do u think u have the right to critisize riders considering that you never actually raced yourself?

You are an unimaginable assface. And it is terrific that you’ve decided to write in because guys like you make this column entertaining. One little trip over to Google would have saved you from looking like a tool, but you chose to get all quick with the email and really drive home your intellectual status. Good for you. And thanks for your steadfast commitment to speaking before you know or have any facts whatsoever. You are truly a feather in the cap of your generation.

Just watched the Supercross race for the second time and I am mad all over again.  Villopoto won the race after a lot of setbacks.  Dungey got second, rode smart and mana, what a past year he's  had. Canard had a tough day and rode solid holding off Stewart and then staying with him until the end. I know this is a recap, but with all that said, all they do is pump Stewart!! I am sick of it!!  He is fast and he is tenacious… but he got beat! They (The 3 in the box) just don't give enough credit to the others… it is constantly Stewart!  I like James but give me a break. He received the pass of the race?  It wasn’t the pass for the win… what about Villopoto's pass around Tedesco?  And then they call him the fastest man on the planet while he is on the box! Is corporate supercross behind this? Do they insist someone blow the Stewart horn all the time? I know you guys see it! Tedesco took it to him for a minute, but will he be reprimanded? Is Stewart untouchable? It seems this way and not because of his speed. I know this sounds like supercross conspiracy theory, but is it? Don't sugar coat this, unless it may cost you your job, then I understand.

Pull off your tin foil hat and come up out of your mom’s basement, which you’ve meticulously prepared and stocked for a nuclear winter, and let's go over this. First of all, I agree with your main issue here: Stewart is grossly over-promoted when he is still the main focus after finishing third in a main event. Ryan Villopoto won the race and he should have been the hero of the event and the broadcast. He came back from a brutal injury and he picked right back up where he left off…winning. That’s really impressive and it should have been more of a focus for the television crew. So, once we have our torches lit and our pitchforks readied, whom do we send the angry mob after? Emig and Sheheen? The producer? SPEED Television? I’m not sure which party has the absurd man-crush on James Stewart, but they need to get a grip. The AMA Supercross class has more star power than it has in decades and they focus on the guy that got third? Not awesome. I don’t think it’s a conspiracy, Tim; they won’t be inserting chips in our heads any time soon. But the singular-focus of the television production is a joke and hopefully fans that aren’t happy are letting them know.

My wife came back from the grocery store this evening with a fresh tub
of cookies 'n cream ice cream, so I cruised through dinner and thanked
her for the meal while focused on nothing but the post-race
celebration. Afterwards, I grabbed a good handful of that jug and
wrestled with the "pull here" tab, but I couldn't figure out what I
was doing. I had not opened a tub of ice cream in so long; it was like
I had forgotten how to do it! I stood, there, dumbfounded, as just
1/16th of an inch of material separated me from those creamy contents,
but I could not penetrate, er, get inside, er, access them. I was way
out of practice, I guess. Then our baby girl started crying and I had
to give up. And those cookies so would have gone well with some ‘n
cream. Have you ever had an experience like this?

Yeah, I remember my first kiddie cone. What is this, amateur hour? This whole story reeks of rookie mistakes. I can’t believe you let a thin paper lid keep you from cold, creamy, cookie-filled bliss. Working the lid tab is first-day stuff, brother. And if you do fail you have to improvise, adapt and overcome. What’s to keep you from carving out the top with a steak knife? How about pulling a McGuyver and going in through the side with a reciprocating saw? Why not just punch a hole through the carton with your fist? You might not be ready for ice cream in a carton, Weege. Either harden up or have your wife stick to buying Otter pops and Klondike Bars.

Have a question for Ping? Email him at ping@racerxonline.com. You can also support his ice cream addiction by purchasing one of his DVDs at www.motocross101.com.