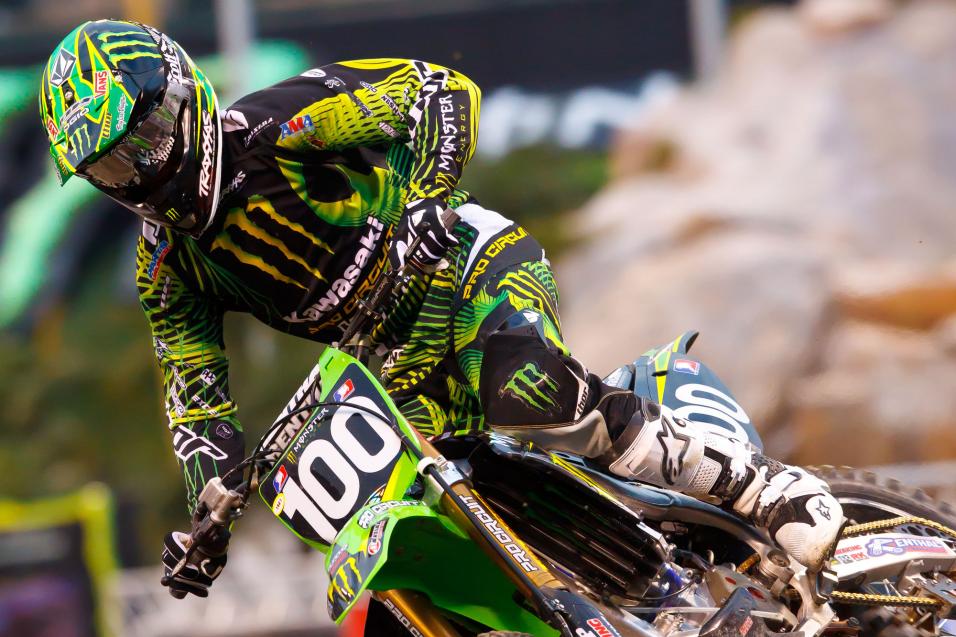 Guns were loaded in every holster heading into Monster Energy Supercross round one in Anaheim. Yamaha had their star back on the scene with James Stewart on San Manuel Red Bull Yamaha, and a reloaded DNA Shred Stix Star Racing Lites team. Suzuki had the defending Monster Energy Supercross Champion in Ryan Dungey, new recruit Brett Metcalfe, and a reorganized Rockstar Lites effort. KTM had a completely redesigned program starring Roger DeCoster, Andrew Short, Mike Alessi, Ken Roczen and the all-new 350 SX-F. American Honda Racing had two new riders in Trey Canard and Josh Grant, and the GEICO-backed Lites team featured new guy Wil Hahn and SX rookie Eli Tomac to match up with veteran Kevin Windham. And Chad Reed had his own CRF450R ready to go.

So much anticipation for all of these brands, but by the end of the night, the Kawasaki boys had painted the town green.

Tedesco and Villopoto teamed up to lead every Anaheim lap in the Supercross main.
Cudby photo

Kawasaki led every lap of the Supercross Class main, with Ivan Tedesco grabbing the holeshot on his privateer Dodge Motorsports Hart and Huntington KX, and Ryan Villopoto making a move for the number one spot on lap two—and never looking back.

The Lites show was even more impressive, with the Monster Energy Pro Circuit Kawasaki outfit grabbing both heat race wins and sweeping the main event podium with Josh Hansen, Broc Tickle and Tyla Rattray. The team led every lap of the Lites main.

At least Yamaha did have one thing to brag about: they grabbed both Supercross heat wins with Justin Brayton and Stewart. Otherwise, it was all green.

It’s just one race, but it sure was a good one for the Kawboys! 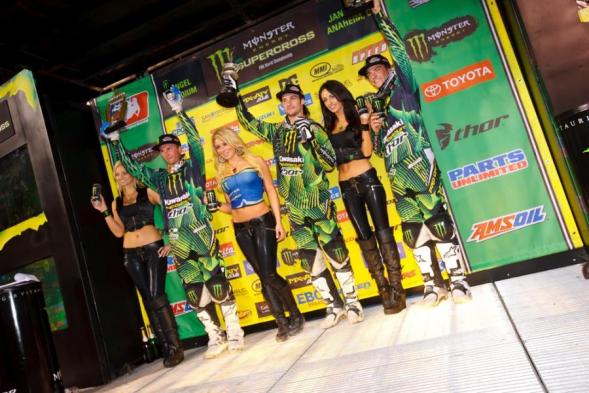 The Monster Pro Circuit Kawasaki team was the definition of domination in Anaheim.
Cudby photo