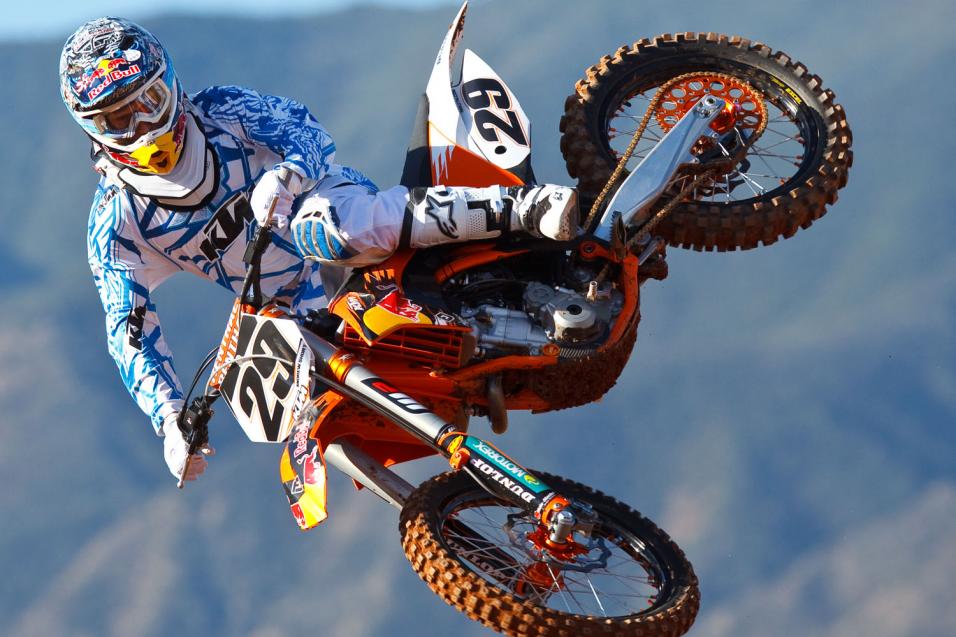 One rider who is coming into the 2011 Monster Energy Supercross season with some question marks is long-time Honda rider Andrew Short. But wait, he’s not on a Honda anymore! Shorty switched over to a new color and some new CC’s at that. Riding for Red Bull KTM on the still-new and developing KTM 350SXF, Andrew isn’t picked by many to be in the front this coming weekend (well except for that one guy on the Pulpmx Show who said he will win) but perhaps he should be. Year in and year out Shorty is a podium threat no matter what class or discipline he rides. He’s a consummate professional who puts in the work and with Anaheim coming up he talks about his chances, his bike and his multi-national team.

RacerXOnline: Hey Andrew thanks for doing this. Anaheim is coming up but before we get into that let's talk about the new addition to your family congratulations

AndrewShort: Yeah we’re really excited, Jackie and I. Hudson was born on Monday and he was 8 pounds, 21 inches when he was born. You know it's funny he looks identical to [daughter] Emma when she was born. We’re pretty excited.

It has to be a little stressful with Anaheim coming up and the new addition to the family. How's Jacki doing?

It's actually not too bad, it's so much more relaxed then it was for our first kid. When that happened, it wasn't planned, and it was our first one and I was really, really nervous. And it was in between two races, like San Francisco and San Diego and so you can imagine that! This one was so much easier so much less stressful. I'm not stressed at all actually. 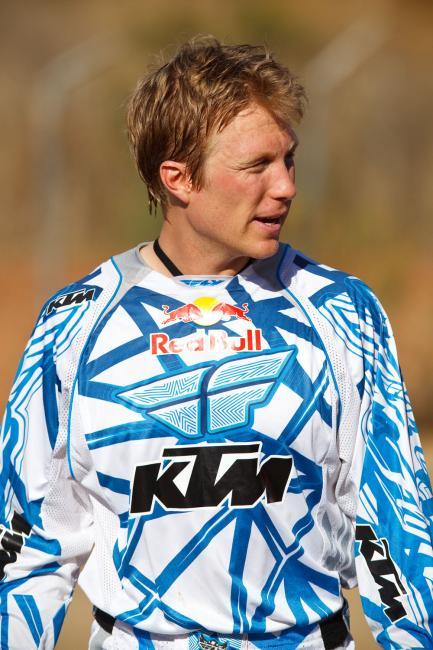 Shorty's got a new family member and team for 2011.
Photo: Simon Cudby

So how's the riding coming?

I was ready as I can be really. But I'm so pumped on this KTM, I'm excited about this bike and I’m as ready as I can be. I guess you never really know until you get to the races. But I put in the work that I needed to and let's go racing. I’m excited to see what happens, see how I do off the gate and get into the mix with those guys. I’m done as much as I can to be ready for anything.

Is there a way for you to measure yourself against last year? Like what you’re improved on and what you still need to work on. Is that something you’ve thought about?

No, not really. I don’t think there’s a way to measure that. My strengths are another year experience, I’m a little smarter and I know what to expect. The mentality is to stay strong, enjoy it and adapting to each situation that I think I’m better at this year. Speed-wise, I feel better but it’s hard to really know until you’re out on the track. That’s the ultimate measuring stick and all the talk stops when you cross that finish line. How far off or how good you are is all determined on when that checkered flag waves. At the same time though, it’s only one race and many people make judgments on that one race when it’s a 17 race series.  So I know I can build throughout the series.

Also, I can’t wait to work with this team. Some of us are new here and getting along really well. Myself, Roger (DeCoster), Ian (Harrison), Casey (Lytle), Leighton the engine guy- we’ve all been working hard. I’m excited. 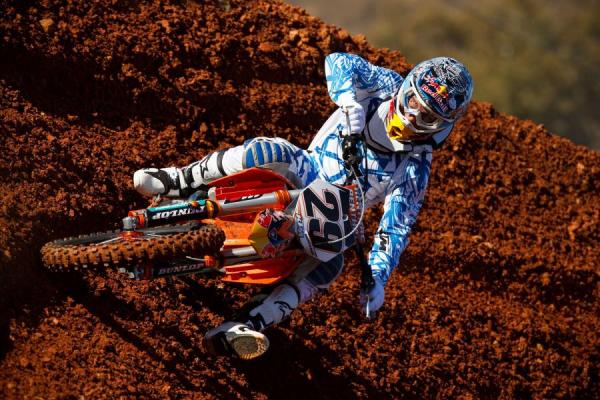 Short is quickly adjusting to the 350.
Photo: Simon Cudby

Are you one of those guys that’s gone over the track map and visualized yourself out there jumping everything?

Oh yeah, for sure. I try to put it in my head about how it looked last year and how it developed as the night when on. The starts are going to be crucial, as it always is. There are so many good guys out there, it’s just ridiculous. You have to put yourself in a good position and then good things will happen to you in the race, that’s what I’m focusing on trying to make happen for me.

Do you feel like you’re coming in a bit under the radar as per usual Andrew Short form?

Yeah, I think that the people that get the credit deserve it, there are guys that have been really fast in the fast and they deserve it. It seems like I have been getting a lot of love here and there from the fans and media and I appreciate that because I know there are some big guys out there but yet I feel like I can battle them and give them some good races.

Let’s talk about your teammates a little bit, I was up at Mike Alessi’s place watching you ride a little while ago and I have to think there are some people at A1 who are going to wonder who this #194 is on a KTM. Ken Roczen is the real deal right?

Yep, him and I have really clicked and we hang out together. He’s a younger guy, he loves to ride and train with me. We’ve pretty much ridden every day since he’s been here. I’m like his father or something! He’s still learning the ropes and I think he’s going to win some races but there will be some races that he throws away because of his age and stuff. Don’t get me wrong, I don’t hope he does or anything. But I really want him to have some success and I think he’s going to be special, he’s going to be one of those guys that breaks through and makes it happen. He kind of wants it all to happen all at once but I think he’s around good people that will coach him. It’s been a lot of fun for me to be with him and working hard. It’s been great for me even to get that enthused about a kid, to go ride with him, to go find jumps in the hills like 16-year old kids do. It’s been a breath of fresh air for me and got me out of my comfort zone.

I had dinner New Years Eve here with Antonio Cairoli and he’s a great guy, very humble and nice for his accomplishments and then you have Roczen and also Marvin Musquin over there. KTM is really building something with all these people from all over the world.

Oh yeah and Musquin is a great guy also. He’s hurt right now but I’ve been hanging with him and his girlfriend. He’s cool, he’s French and you know sometimes those guys get a bad rap but he’s been really nice. Great crew at KTM and I didn’t know any of these guys beforehand but it’s really great to all get along and to see the different lifestyles that each guy has and brings to the table. 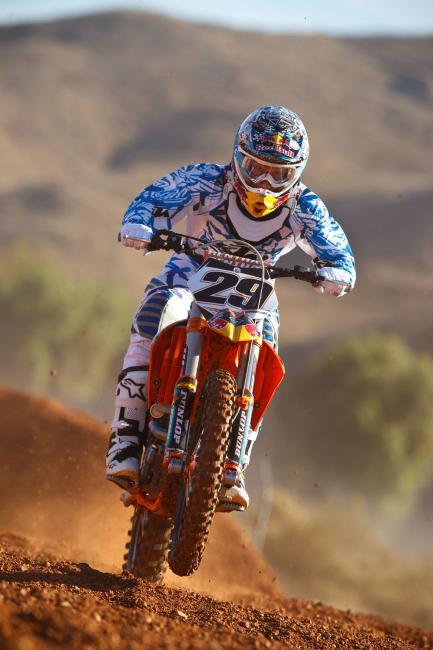 What about the other American on the team, Mike Alessi? How’s he doing and what’s he like as a teammate?

I ride with him maybe once a week or so, he’s got some great tracks up in the desert. He’s been good, I think he’s been a little hesitant on the supercross thing but he’s now committed and is going full-on to try and get better. He’s breaking in his race bike today and I’m going to see him here right away. He’s been really good for KTM, he has these tracks and facilities that he offers up to the team to use. He’s a great kid, he works really hard and I think I can learn things from him as well.

How is the new technical crew at KTM doing? You have Rob from RG3 handling suspension, Ian Harrison helping with the motors and Roger DeCoster holding it all together as manager. How’s that transition going for you?

It’s been meshing really well, the team has a real family atmosphere. Everyone does everything together, we all get along and all that. Roger, I have been starting to talk to him more about racing and all that. He’s really into being back in the machine shop and working back there, way more than I realized actually. I think once we get started racing, I’ll end up talking to him more about it. Ian has been wide open getting ready to go racing and he’s getting everything dialed, he’s on overload! He’s always happy though. Everyone’s moving forward and everyone’s excited about our projects which keeps everyone working together towards one goal.

And how is your mechanic Frankie Latham? Yelling at everyone as usual?

(Laughs) yeah, you know Frankie. He’s great, he’s been working hard and him and Carlos (Rivera) along with Kelly (Lumgair, Alessi’s wrench) and Jan who is from France and is Marvin’s mechanic. It’s almost like a reality show, I think almost every team can have a reality show with what goes on in the race shop but us, with all of our different personalities – it could really be great. But only after I’m retired because I don’t want to be on one!

Let’s get down to the nuts and bolts. What are you going to be happy with this weekend as far as a position?

I’m not really big on that position stuff…

I knew you wouldn’t be but c’mon.

No, I just want to go there and have a strong ride. If you get a good start, you put yourself in position to do well and then you will. If it doesn’t happen then that’s okay as well, there’s sixteen more races after this one. There are too many races to make a judgment on just one race. Last year I was in third for the whole race and got passed by Windham with like five laps to go. I got fourth and was bummed on that, but looking back and I watched it a week ago, I should’ve took the positives out of it.

My one goal this year is to win a race, have fun in this process and enjoy myself throughout. Because some years I’ve put so much pressure on myself, I get miserable when it doesn’t go my way. I have such a cool job and I’m so lucky to be able to do this that I should just be myself, enjoy what’s happening and I’ll be more happy in my life. I do definitely want to go for that win though.