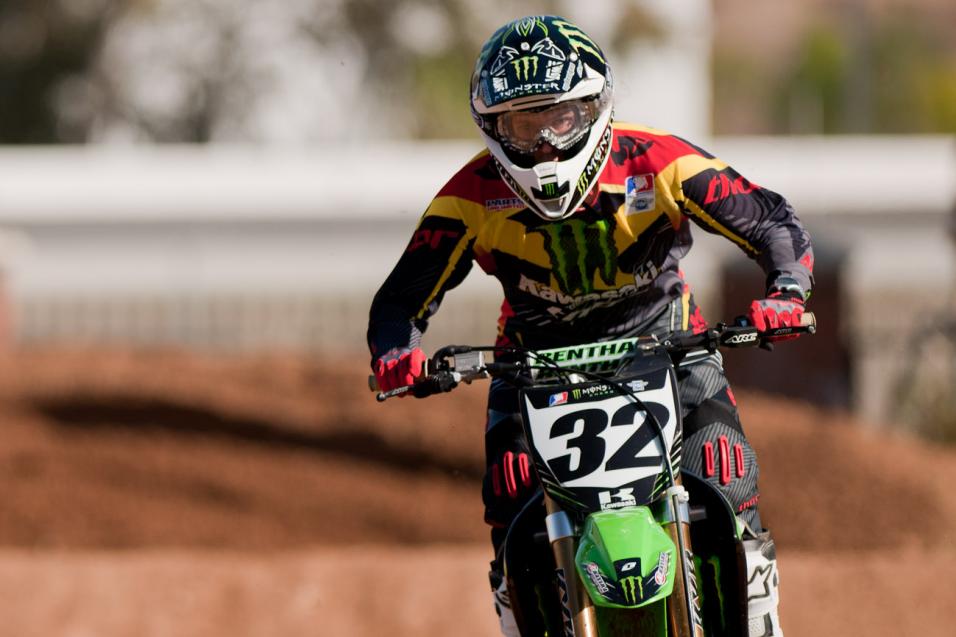 Jake Weimer has been a steadily rising star for over five years, since he won a tryout to become a part of the Factory Connection Honda team to start his career. Every year since he has improved, finally winning his first supercross in 2008 (Phoenix), then winning three more in 2009 against Ryan Dungey along with three AMA Nationals and representing the victorious USA team at the Motocross of Nations in Italy. Then, last year, things finally came all the way around as he dominated the Lites West SX Championship, along with the East/West Shootout in Las Vegas, before succumbing to a back injury and sitting out most of the nationals. Still, his results and demeanor landed him a two-year deal with the Monster Energy Kawasaki team for his 450cc debut alongside teammate Ryan Villopoto. However, last Tuesday, he went down while practicing at Villopoto’s house and broke his left lower arm pretty badly. We caught up with Weimer to find out how he’s doing. 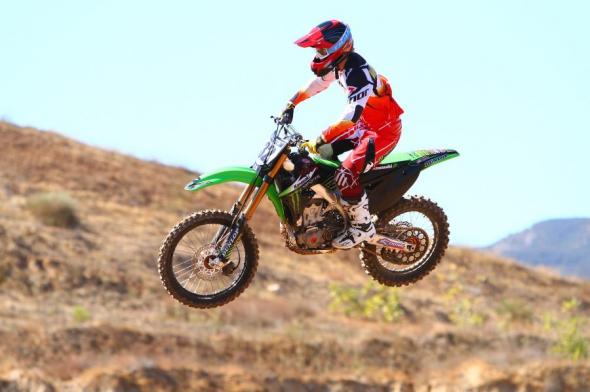 Racer X: Jake, so this was going to be, and still kind of is, a big year for you with moving up to 450 and all that. What were your expectations before your injury? How did you feel?

You’re a fine outdoor rider, but obviously great at Supercross. Did that play a little more into it, thinking, “Supercross is my thing and I know I’ve got this wired”?

No, not really. I know it seems that way, that Supercross is obviously better for me... I think it maybe is a little bit, but probably not as much as it looks like it is. In ’09, I won three supercrosses and then was on the podium a few times. I also won three outdoors and was on the podium a couple times in ’09 as well. To me, last year was a complete write-off outdoors. It was like it didn’t even count. I mean, obviously it counted, but to me it didn’t matter because I was hurt. When you’re hurt you can’t expect to be competitive at a high level. So, it might seem that way to a lot of people and it might be a little bit easier for me to be good at Supercross, but in reality it’s all the same to me. I want to be good at both.

So, what exactly happened in the crash?

Well, there’s been a lot of rain in Southern California the last week or so. We were riding, doing our motos, and the track was pretty soft and pretty rutty. I was out at Villopoto’s house and we were doing motos out there, and there was a whoop section and after that a little bit of a gap and then three, three-footers into a corner; we were going through the whoops and tripling the three, three-footers into the corner; I came through the whoops and was shifting down in between the whoops and the jumps and I just came through the whoops and got my shift in kind of late and seat bounced it, and it pretty much went all wrong and I just endoed off the thing. So, that was pretty much that. It happened really, really fast. I didn’t even know I was crashing until I was getting up.

It was one of those crashes where it’s such a total surprise and you think everything is under control, huh?

Trying to dodge a bike, probably...

Is that what got your arm?

What do you know about your prognosis?

Well, it happened on Tuesday and I had surgery probably within four hours of the crash. I spent two days in the hospital and was out Thursday. I talked to a doctor a couple of times and basically I have an appointment tomorrow, so that’ll be a week after the crash. I don’t really know much; all I know is that I have two plates and 16 screws. Hopefully, I’ll find out more by tomorrow. I think a normal broken bone is six to eight weeks. I had surgery on it and it was obviously worse than a normal broken bone, so I don’t really know... That’s really all I know. I don’t really know details. I’m hoping to find out more tomorrow.

What about the reaction of people around you? Your friends, family, team... What was that like when they heard you got hurt?

You know, everybody is disappointed. It sucks and it’s a bummer. I put in a lot of work and I was really happy with how everything was going. I was really excited and everything was jiving. It’s heartbreaking a week before the opening round to get injured, but it’s one of those things that comes with the territory and happens. Unfortunately, it happened to me a week before Anaheim. Now, you just deal with it, and for me, I’m trying to be positive. It’s definitely tough because I was definitely really excited for this year. Obviously, the outdoor season was kind of a bummer with the injury. But with the transition to the 450 and testing, everything was going so well that I was really excited. It’s tough, but it is what it is. I can’t complain that much because in reality I really haven’t been hurt that much in my career, so you have to take the good with the bad.

Yeah, but it’s always tough, especially when you’re excited about something, because the higher you are emotionally, the harder you fall from it.

Oh no, I’m still upset about it. I’m not happy about it, but what do you do? There’s nothing you can do. You can either be pissed off about it for eight weeks (or whatever) or you can try to be positive and look forward to when you get back on the bike. I’m definitely still bummed about it, but I’m trying my best to be positive and I definitely look forward to getting back on the bike and get back after it.

What about on the training side of things? How do you handle that when you’re going to be hurt for eight or more weeks?

Well, obviously, with a cast on, there’s some stuff that you just physically can’t do. As soon as the pain goes away, or at least gets to where it’s manageable, I’ll get back on a spin bike. There’s some stuff I can do, like spin and a lot of the core exercises and stuff like that. Obviously, any kind of arm workout or anything that requires me to use my arms I’ll be out for a while, but as soon as the pain is to where I can handle it, I’ll be back on the spin bike and doing everything I can just to keep the physical side of my body up and going. 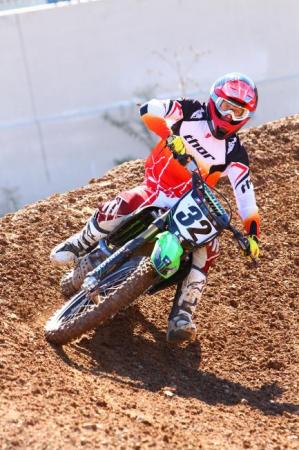 Weimer doesn't know when he'll be back on the track.
Photo by Simon Cudby

It seems like the more you do that, the sooner after everything is healed you can actually get back to racing again.

Yeah, totally... I’m definitely going to keep on the diet and try and be as healthy as possible to fuel the body and try to recover as quickly as possible, as soon as possible. Just try to keep it as close to ready as I can. As quick as I can do it, I’ll be doing it.

And speaking of training, you’re working with Aldon Baker alongside Villopoto. Prior to your injury, how much different did you feel from what you felt like previously? You’ve never really been a guy that was out of shape, but what’s the biggest difference for you in working with Aldon?

It’s a little bit tough to say because the 450 obviously is a different bike to ride and the motos are a little bit longer, so you automatically have to be in better shape. But that’s the thing: I was so excited about how everything was going. My body felt so good and I felt strong and I was flexible. I was excited. I was happy with where I was and I was looking forward to racing. I felt like I was ready to race.