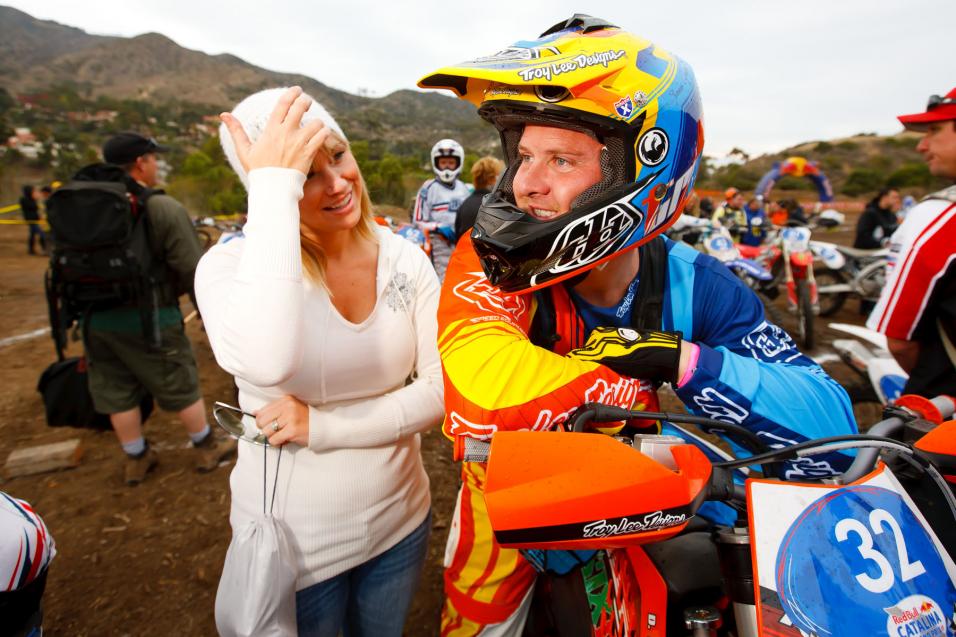 I know a bit about you but you don't know me. I live in Manly, Australia, and my two biggest claims to fame in life are kissing Dania Ramirez in a club in Greece two years ago, and riding Jeremy McGrath’s YZ250 in 2002 through the Yamaha test track whoops with Phil Lawrence in front of me. Two memories I shall never forget.


I like to think I know a fair bit about the ins and outs of the AMA MX scene, but a few things are eluding me at the moment. It’s hard to keep up with you Americans during December down here in Aus because it's 90F outside here and the waves are great at the moment.

1) What is happening with CR22? Every other rider seems to be at least getting photos done, making appearances, video shoots, gear photos, etc, but I have seen or heard nothing from the Reed camp. Any info?

2) Did Thor drop Pastrana? I have seen a few photos of him wearing no-name gear just with logos on them, and then today I see a pic with Fox gear on. Have the CEOs at Thor gone completely mad? Travis's exposure across a global market is surely second to none, and every second time you see him he either is wearing DC or Thor.

3) Why do Americans seem to hate Toyota utes? (or "Pick-ups", "Trucks", etc). I love my new Hilux, but my American friends who now live in Aus think it is a pile of junk. I can't see why.

4) I think Grant Langston has the coolest whip of the 2000 to 2010 decade. Can you whip like him? I see you kept him behind you on that 125 in Racer X's latest vid, but I didn't notice you throwing down.

5) Can you PLEASE post up on Racer X the video of you snapping that tiddler in half in Phoenix? I can only show so many people Motocross 101, I want the world to see.

Whoa, hold on for a second. Back the truck up. Are you telling me that you made out with Dania Ramirez at a club? That’s what you are saying right now? The girl in the photo posted next to this text? This girl? I think it’s awesome that you live in a town called Manly, but I’m not buying this one. Europe is known for having surprisingly good looking transvestites (Right, Buttonfly?) and after a few shots of whatever and/or glasses of whatever it would be pretty easy to think you were making out with Dania Ramirez when, in fact, you are getting to second base on the dance floor with Daniel Ramirez. I don’t mean to crap all over your dreams right now, I just want you to consider that this might have happened.

1) Reed is hiding out. He doesn’t want anyone to see him until A1. He’s wearing Shift and riding a Pro Circuit Honda with #22. That’s about all we know. We’ll know everything in a few more weeks… be patient.

2) Yes, Thor cut back. Travis is going the car racing route and Thor does not sell car-racing apparel. Don’t worry for TP… he’ll land on his feet.

3) Americans don’t hate Toyota trucks. They have a great reputation here for their reliability, looks, power, and involvement with our sport. What we hate is when you Aussie’s call them Utes. It’s a truck, mate.

4) GL can throw down a whip, no doubt. Mine is like a watered down version of GL’s. Really watered down. Think of a cocktail in a strip club and you’re on the right track.

5) Negative. It’s an amazing piece of video and if people want to see it they will pay the $24.99 just like you did. Thanks for buying, by the way. (Visit www.motocross101.com)

Anyway, to the point: as you are probably aware (and hopefully pissed off about), there is a massive radical environmentalist movement in this country. The environmentalists have every intention of completely banning all mechanized vehicles from federal land in this country via "national monuments" or "wilderness areas"; and in most instances they are circumventing congress by getting government bureaucrats-via what can only be described as a complete perversion of the Antiquities Act-to close 10’s and 10’s, and I dare say 100’s, of millions of acres of public land to OHV’s with the stroke of a pen in some backroom, with the doors locked and blinds closed deal with the environmentalists. And the worst part is that the environmentalists are-trail by trail and acre by acre-accomplishing their goal, despite the mostly grassroots efforts of some very dedicated groups (like the Blue Ribbon Coalition on a national level and hundreds of smaller state specific groups throughout the country). But it’s just plain not enough.

So what I need you to explain for me is WHY-IN-THE-WORLD the manufacturers, race teams, pro riders, gear companies, magazines, websites, aftermarket parts companies and every other genre of the dirt bike industry aren’t vocally, adamantly, and publicly fighting against this atrocity which is sure to have an extremely negative impact on their businesses and livelihoods?

There are a million things the industry could be doing to fight this crap (most of which are free), and yet I see NOTHING from the industry (okay that was a bit of an exaggeration…I see "almost" nothing from the industry). We need to raise awareness of this issue among our dirt bike brothers (and our redheaded step brothers the ATV riders, and our redneck cousins the 4X4 rock crawlers, and our sisters the mountain bikers)…with a little awareness, and a little education we could make huge progress in fighting this anti-OHV movement…but we need the industry to step up and help us out! So what gives?

Man, that really resonates with me. I was moved to the point where I actually had chills, especially when you said, and I quote, "…our red-headed step brothers the ATV riders." So deep.

Okay, seriously, this is a big deal. And I don’t know why more isn’t being done. Maybe everyone thinks it won’t happen in his or her area? Maybe we are all just inherently lazy when it comes to political stuff like that? I don’t know. What we really need, I think, is for someone to take the lead and make a big push nationally. I know I would get behind it but it’s difficult to know where to start on something so broad. If you have any ideas there please share them. In the meantime there is no reason every moto fan shouldn’t be involved with the Blue Ribbon Coalition and the AMA.

Thanks for the letter and the awareness.

Even though I want to punch you in the suck-hole when you flatten my berms, we need to join together on this.

As a die-hard moto fan, how am I supposed to survive in the winter here when it won’t stop snowing? Two feet of snow last night? Really? I can’t ride now for at least three or four months, which sucks. But it’s too cold to do anything outside! Come on… below zero temps? Really? This is lame.

Sorry to hear about your weather-related problems. You didn’t specify where you live, but if there are mountains anywhere nearby you should really learn to ski or snowboard. That could keep you from going out of your finger-licking mind. And if you have a 450 you should really check out the snow machine kit made by a company called 2Moto. It is so awesome you’ll forget you are riding in the snow… it will just be like white dirt after a while. Those are my suggestions if you don’t want to move. If you want to move, just be sure to stay out of California. This place is a disaster and the freeways can’t handle another person.

Got a question for Ping? Email him at ping@racerxonline.com. Check out the Ask Ping archive right here. Get your last-minute Christmas shopping out of the way at Motosport.com.
Read Now
September 2021 Issue Now Available