AURORA, Ill. – Feld Motor Sports announced today that the Monster Energy AMA Supercross, an FIM World Championship, season preview show will air on Sunday, December 26 at 3:00 p.m. on CBS Sports, featuring a new format. The one-hour preview show will take fans through the highly anticipated story lines that are emerging as the 2011 season closes in on the gate drop of Anaheim 1 Saturday, January 8.

The Monster Energy Supercross season preview show is positioned almost perfectly for fans as it will lead out of CBS Sports’ Sunday NFL coverage.

"We look forward to once again showcasing the best of Monster Energy AMA Supercross on CBS Sports in 2011," said Rob Correa, Executive Vice President, Programming, CBS Sports. "We have a long history with this exciting sport and the up-coming season looks to be one of the most anticipated in years." 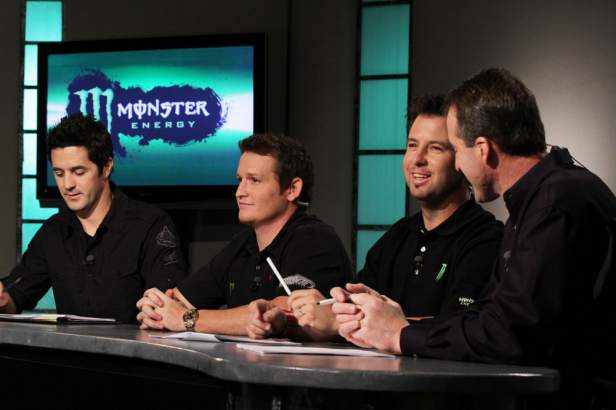 To preview what’s being called the greatest season in the sport’s history, a panel of legendary AMA Supercross riders will breakdown the 2011 up-coming season and foreshadow the excitement that fans can look forward to from season opener in Anaheim to the season finale in Las Vegas. Defending AMA Supercross champion Ryan Dungey will stage his title defense against arguably the deepest field in supercross history.

McGrath, who is the all-time winningest rider in supercross history with seven titles and 72 main event wins, says he can’t remember a season with a field this talented.

"This is possibly the deepest field in the sport’s history," said McGrath. "There has not been a season in a long time where so many different riders have the potential to win. I can’t wait to get this season started. I am looking forward to being involved in this ‘new’ preview show format with the rest of the supercross greats."

Stanton, a two-time AMA Supercross class champion, has high expectations for the 2011 season.

"There are so many questions marks this year because you don’t know who will step up and rise to the challenge," said Stanton. "There is a lot of uncertainty and that makes for a great season of racing. Personally, I hope that these young guys, like Trey Canard or Jake Weimer, surprise the veterans. Last year, Dungey proved he is a champion. Reed and Stewart are both champions and when you add in the rest of the field, it’s exciting just to see how it will all unfold. The season preview show will give fans an in-depth look at what this amazing season has in store for all of us," Stanton added.

"This season could closely compare to the 2005 season, but I believe this one could edge it out if everyone stays healthy just because there are more guys that have a chance to actually win straight up and not because of a technicality."