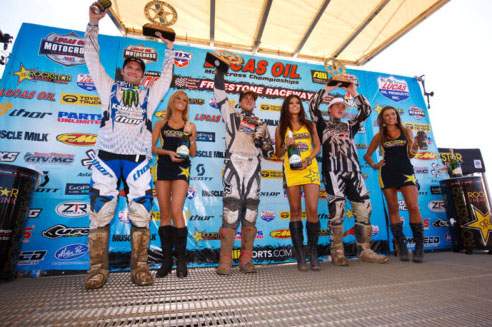 This blue podium backdrop can be hanging in your garage!

Auctions are also up for the exclusive Pink GNCC race podium backdrop from the season finale Ironman race, as well as an exclusive set of plastic and pink graphics from GNCC Champion Josh Strang’s Suzuki RM-Z450. 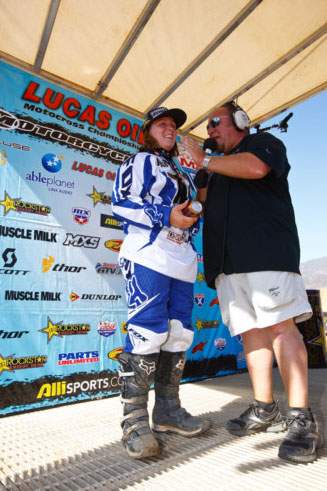 JP$ in front of the WMX backdrop.

This is an exclusive opportunity to bid on podium backdrops that could make your garage, office, man cave or bedroom the envy of everyone. These backdrops could make an amazing Christmas gift, and all of the proceeds go to worthy causes.


About the Lucas Oil AMA Pro Motocross Championship
The Lucas Oil AMA Pro Motocross Championship is the world's most prestigious motocross series. The Series is managed and produced by MX Sports Pro Racing, whose mission is to raise awareness of motocross racing through the promotion of professional championship racing events nationwide.
The series is also produced in conjunction with Alli, the Alliance of Action Sports, a global business that encompasses national and international action sports events, multimedia production and a consumer-based lifestyle brand.
Alli is owned by NBC Sports and MTV Networks and represents a vast network of athletes, fans, brands and properties.
The Lucas Oil AMA Pro Motocross series is sanctioned by AMA Pro Racing, the premier professional motorcycle racing organization in North America. AMA Pro Racing operates a full schedule of events and championships across every spectrum of motorcycle competition.

About GNCC Racing
The Can-Am Grand National Cross Country Series is America's premier off-road racing series. Founded in 1979, the 13-round championship is produced exclusively by Racer Productions. Each event is nationally televised on the Versus Network, and consists of two race days: ATVs and side-by-side machines on Saturday, and motorcycles on Sunday. The grueling three-hour races draw as many as 1,800 riders, making it the largest off-road racing series in the world. For more information, please visit www.gnccracing.com.