After turning pro in 1991, Ferry amassed a solid career at the highest level of the sport. After graduating from the Loretta Lynn's Amateur National that year, Ferry began as a true privateer, learning the ropes of professional motocross with limited support. Within a few years he had the attention of the factory teams. By 1997, while riding for Team Suzuki, he broke through to capture his first and only AMA title in the Eastern Regional Supercross Championship. From there, he continued to attack the sport with a trademark determination and tenacity that earned him the nickname "Red Dog." He had several big wins along the way, including the 2007 Motocross of Nations at Budds Creek, where he teamed with Ricky Carmichael and Ryan Villopoto to help Team USA win the day. 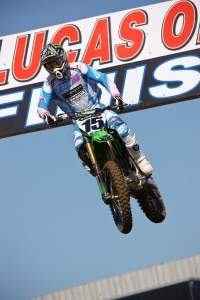 The "Red Dog" Timmy Ferry is one of the most beloved riders in American motocross history.
Courtesy Racer X

Throughout his 19-year career, Ferry, a Florida native, became a staple on the podium, regularly making his presence felt at the front of the field and amassing six championship podium efforts along the way. In recent years, Ferry's dogged riding style was more evident than ever as he consistently went bar-to-bar with the rising stars of the sport despite being nearly a decade their senior in many cases. He capped off a stellar career by finishing second in the 2008 AMA Pro Motocross Championship standings, his final full season of competition, while riding for the Monster Energy Kawasaki team.

In an effort to honor Ferry and his many contributions to the sport of motocross, MX Sports Pro Racing will give "Red Dog" a well-deserved parade lap at the Steel City facility, giving him the chance to thank his thousands of adoring fans and bring his career to an official conclusion with one more lap out on the track. Ferry will also join the broadcast troupe of Jason Weigandt, Jeff Emig and Erin Bates as a guest analyst at Steel City, bringing additional insight of the day's action to the hundreds of thousands of viewers watching from home.