MORGANTOWN, W.Va. (August 10, 2010) - MX Sports Pro Racing has released the pre-entry list for this Saturday's Rockstar Energy Unadilla National from New Berlin, N.Y., and as expected, a familiar and highly anticipated name is on the form. It's been 23 months since he last completed a lap at an AMA Motocross national event, but in just six days, San Manuel Yamaha's James Stewart will return to the sport for his Lucas Oil AMA Pro Motocross Championship debut on Saturday, August 14.

Since capturing the 2008 AMA Motocross Championship with just the third perfect season in the sport's history, Stewart shifted his focus primarily to AMA Supercross after joining the San Manuel Yamaha team. During his absence, the entire landscape of American motocross has shifted, with live national television coverage, worldwide internet coverage, and a deeper, more talented field of riders highlighted by more international stars than ever before.

And to make the most anticipated return in American motocross history even more exciting, all the drama and action from New York will unfold live on NBC Sports with coverage of the final 450 Class moto beginning at 3 p.m. ET. 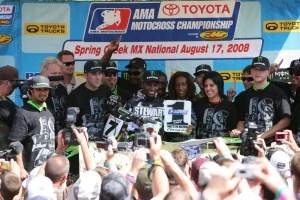 With millions of motocross fans from around the globe yearning for his return (and an industry-wide curiosity about how he'll fare), in addition to the opportunity to be a part of the sport's continued growth, the world's most popular motocross athlete couldn't resist the chance to come back to his roots. With the rise of 450 Class rookie and reigning AMA Supercross Champion Ryan Dungey, Stewart will look to end his former prodigy's stranglehold on the premier class by competing at the final four rounds of the 2010 season: Unadilla, Southwick, Steel City, and Pala.

"We couldn't be happier to have James Stewart return to American motocross," said MX Sports Pro Racing Vice President Davey Coombs. "James is clearly the biggest star in our sport, and ever since he made history en route to the 2008 title, we've all been waiting for this day to come. The sport of motocross and this series in particular has experienced tremendous growth in the year and a half James has been off the tour, and with his return, it will reach new levels that we could have only dreamed of."

"My goal is to do the best I can in the motocross nationals," said Stewart, whose last competitive motocross competition was the 2008 Motocross of Nations. "While I haven't had a lot of time to test and train, I committed to running the last four races of the series, and I feel I need to do this-for myself as a rider, for my team, my sponsors, and my fans. I'm looking forward to racing in Unadilla." 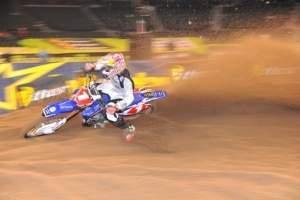 Stewart's return to the nationals will also mark his debut outdoors for the San Manuel Yamaha team. He has not competed since bowing out of the 2010 AMA Supercross season with a broken wrist.
Courtesy Steve Cox

Stewart's San Manuel Yamaha Team Manager Larry Brooks is also supportive of his rider's return and his team's foray into the outdoors.

"James' supercross season was cut short this year, and this is a perfect opportunity for him to get back on the track and race," said Brooks. "We owe it to him to support him, as much as we do to the sponsors and fans that support our team and the series. We look forward to racing the remainder of the motocross nationals."

With Dungey leading the way aboard his Rockstar/Makita Suzuki with a seven-race winning streak, Stewart will surely have his fair share of challengers at Unadilla, including Honda Red Bull Racing's Andrew Short, GEICO Powersports Honda's Brett Metcalfe, Jagermeister KTM's Mike Alessi, and Troy Lee Designs/Lucas Oil Honda's Ben Townley. There will also be some added competition, as Belgian motocross star Clement Desalle returns to the AMA Motocross circuit for a cameo appearance under the Rockstar/Makita Suzuki tent. Desalle is currently ranked second in the Europe-based FIM Grand Prix series.