Since the victory over Holland in the final of the FIFA World Cup in South Africa, the entire country of Spain has been in permanent party mode, and with the fourth stop of the Red Bull X-Fighters World Tour 2010 coming to Madrid’s Plaza de Toros de Las Ventas on July 22 and 23, the celebrations are set to continue. Among the favorites for the win at the traditional two-day event in the most beautiful bullfighting ring on the planet will be not only overall leader Andrè Villa and local hero and fans’ favorite Dany Torres, but also the international stars such as Levi Sherwood from New Zealand and Australia's Robbie Maddison.

MADRID (ESP) - The fact that the locals in Madrid know how to have a good time will come as no surprise to the Red Bull X-Fighters, for whom the Spanish capital has become somewhat of a second home as it plays host to the highlight event of the most prestigious FMX tour in the world year after year. On July 22 and 23, the finest freestyle motocross riders on the planet will return once again to the legendary Plaza de Toros de Las Ventas to show why FMX and Madrid simply belong together.

The points situation in the overall standings going into this year’s event is just as close as it was in 2009, with the three stops in Mexico City, Giza and Moscow producing three different winners. Thanks to consistent performances, reigning Red Bull X-Fighters Champion Nate Adams has managed to reduce the gap to standings leader Andrè Villa, winner of the first event of the season in Mexico City, to just 20 points, while his win on Moscow’s legendary Red Square just a few weeks ago means that Levi "Rubber Kid" Sherwood is right back in the fight for the title with 175 points. Hot on his heels are Robbie Maddison and Adam Jones, who impressed at the second stop of the season in Egypt to take the win under the gaze of the Great Sphinx of Giza. The situation is so tight that a win could see any one of the riders in the top five assume the overall lead after the event in Spain. 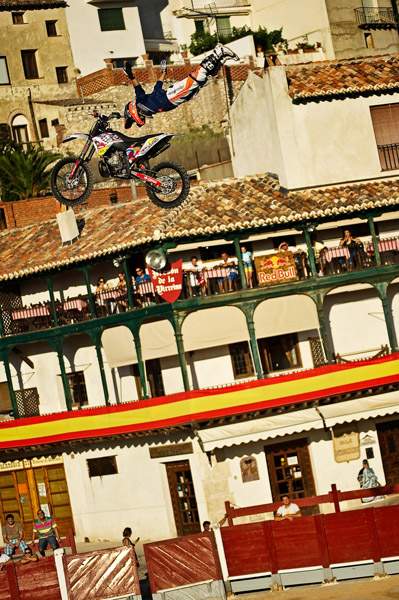 Yet, when it comes to the passionate Spanish fans packed into Las Ventas, there is one man who is a favorite for the win year after year – local hero Dany Torres. Pushed on by tens of thousands of Spaniards screaming their lungs out, Torres always manages to step it up a level in front of his home fans and took his first win of the 2009 season last year in Madrid. Following an operation on his broken hand, the 23-year-old is raring to go after making his comeback in Moscow just a few weeks ago and will be looking for a repeat of his incredible victory in 2009. Earlier this week, Torres took to the air in the bullfighting ring in the old Spanish town of Chinchon, south of Madrid (see attached images).

Qualifying and the Wild Card event will take place this evening, while the World Tour competition is scheduled to take place on Friday evening in front of a sell-out crowd of 25,000 fans.