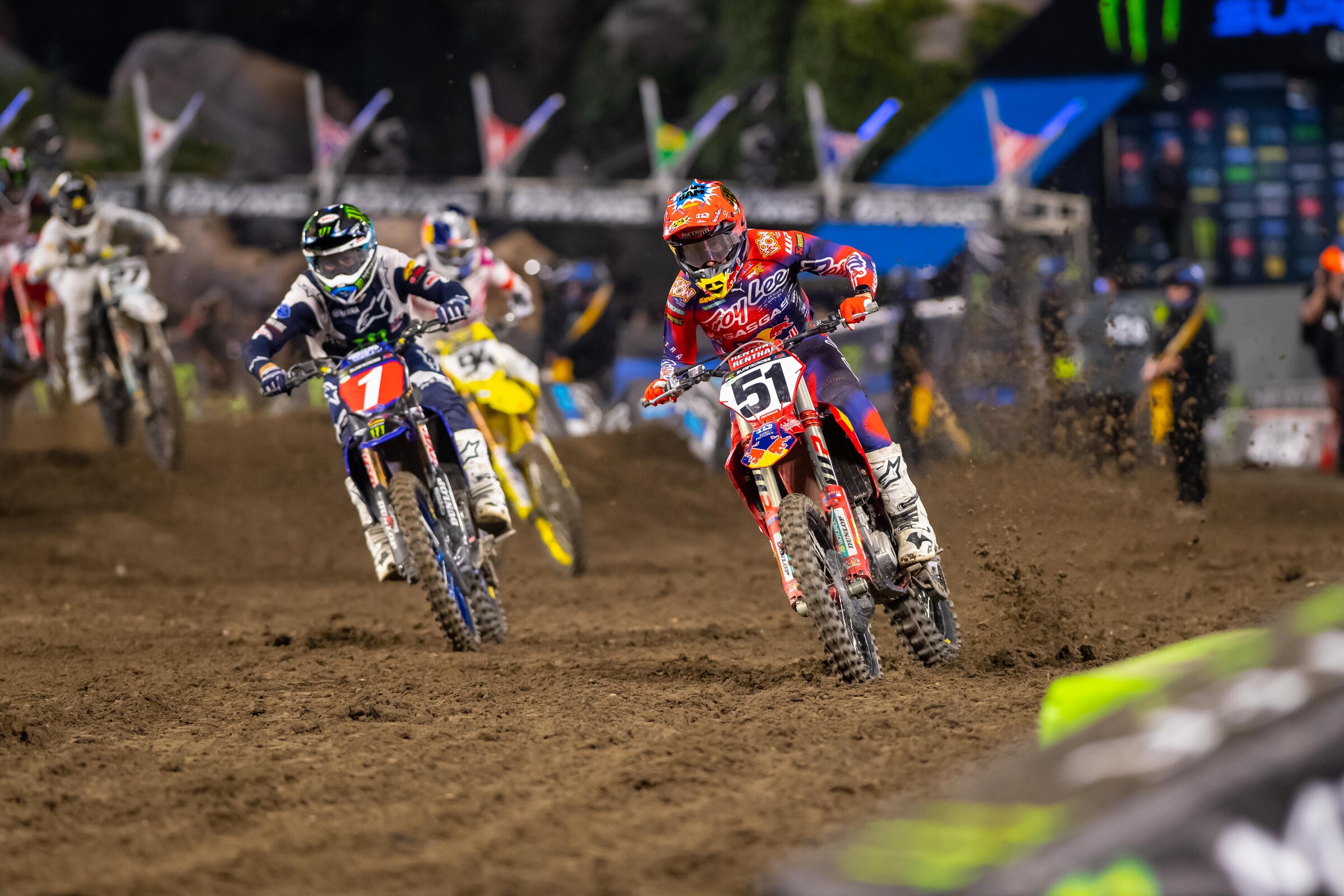 With great racing and lots of action, Anaheim 1 was full of stories in the 450SX main event. Monster Energy Yamaha/Star Racing’s Dylan Ferrandis came up from a bad start to charge all the way to fourth while Troy Lee Designs/Red Bull/GasGas’ Justin Barcia got the early lead before crashing twice and finishing 11th. Nestled between them was Honda HRC’s Colt Nichols who grabbed the holeshot and was immediately shuffled back to about ninth, where he basically stayed the whole race, before later claiming a sixth-place finish in his 450SX debut. To follow all of those storylines, we caught up with each of them after the race.

Racer X: Dylan, first race of the season. It went pretty good, man, take us through it.
Dylan Ferrandis: Yeah, sure. After such a bad season last year and two bad seasons in supercross, it was good to finally show up at A1 and be ready and show something. I had a good afternoon and a good heat race, but unfortunately my main event had a bad start. I banged bars with AC [Adam Cianciarulo] and I had to shut off the throttle. So yeah, bad start and then I just worked my way up. I felt like I had a shot at the podium. At some point I think I was third and a little mistake cost me the podium and [Cooper] Webb passed me. But we were battling hard with Webb, I passed him, he passed me back. Just happy to be in the mix. I finished in Chase’s [Sexton] rear wheel so I feel like I have a shot for this championship. It’s good to finally have this feeling.

On a new bike, sometimes you can feel good in preseason, but you never really know until you get to the races. How are you feeling with one race under your belt?
For me, the last two winters, I was already prepared for a difficult season because I was not feeling good in practice so I kind of knew. This winter, I felt like the bike was good. We rode in many different conditions in Florida. In the mud, in the hard [packed], on a very tough track, so I feel like the potential with the bike that the bike is good this year. I was already prepared that the bike would be good, and we showed tonight with Eli [Tomac] also that the new Yamaha 450 is great. To me, it suits my style much more than the old model and I feel like I can finally be myself in supercross kind of like I was in 250.

It wasn’t the same Anaheim we’ve seen in the past because of the rain this week. Can you talk about the track a little bit and the difficulty of trying to race a track like this?
I think every year Anaheim 1 is always a little soft and sketchy but for sure this year for me personally, the track was the more difficult and challenging one since I’ve been in the 450s. For sure it was tough. We saw the rain we had this week, and it was expected to have such a difficult track like this. I think Dirt Wurx did a great job and saved the race, I think, because it could have been way worse.

Your first night in the 450 Class, take us through it.
Colt Nichols: First 450 experience, it was cool, I was pretty happy. It’s something I’ve wanted to do for a long time, and I feel like I can ride this bike decently. I was just pumped to be there, honestly, it’s been a long time since I’ve raced, exactly a year, since I’ve had a gate drop. I haven’t even been in a main event since Salt Lake City 2021, when I won the championship. It’s been a long time since I’ve raced a main event [laughs]. To come through tonight, P6, I don’t know if I was the sixth-fastest guy, but a lot of guys made mistakes and I capitalized. I was kind of steady Eddy all race, sometimes that’s what it takes. This 450 Class is tough, it’s going to be a learning curve. It’s going to get harder before it gets easier. But overall we’re excited, it’s a good finish for me at the first round. I’ve got something to build on and I’m pumped going into next weekend.

If someone had told you before the gate dropped that you’d end up sixth, you’d have been pumped, right?
Yeah, I think so, based off where we were earlier today. I was kind of struggling a little bit. Nerves, jitters, and trying to figure out the bike in race conditions. It’s been new for us. The track was gnarly today too, so yeah, I’d have been ecstatic if someone told me P6. Getting through this round healthy is pretty much all I wanted to do, so to go P6 is a good feeling.

You said you were struggling with some things, the bike being one of them, so what kind of changes did you make?
Actually it wasn’t bike changes, it was just me. It’d been a long time since I’ve been around a lot of guys on the track, and a track that was so beat up. I didn’t know how to ride it at first, to be honest, I was struggling. I didn’t have any flow in practice. I know a lot of other guys would probably say the same thing, but I couldn’t do a fast lap to save my life. It was just one of those things where I haven’t been out there in a while, haven’t been in timed practices in a while. I couldn’t quite get it figured out quick enough. The bike, I didn’t make one change. Didn’t change it all day, not one clicker or anything. They asked if they could do anything to get me more comfortable, but it was just me. There was nothing to change with the bike, I just needed to ride it better. I was really happy with how it felt after the main event. We have got a few areas we can improve in I think, but everyone does. We’ll keep chasing it and I’m happy with where we’re at.

Take us through the race man, it really looked like we were going to have another Barcia classic Anaheim.
Justin Barcia: Yeah, for sure [laughs]. It was a difficult day. I just struggled with the track and picking it apart. I made some changes that didn’t work for me, so before the main event I went back to my base setting where I was comfortable, and I should have been there all day but it’s Anaheim and crazy things happen. I wasn’t quite as froggy as I should have been in the main event. I got off to a good start and felt really good, strong, was riding good, and then made a few mistakes, came up short and almost endoed. I kind of saved it but crashed to the side. So yeah, that was a bummer. I felt really good. We’re in a good place but the result doesn’t show. I regrouped, got back up to seventh and was kind of in a pack with the boys and then crashed again. So, it was just one of those nights you put past you. Nothing to overthink. The bike was awesome, team was great today, and I’m in a really good place. My starts are good and all that stuff, just one of those tough ones. Something you just kind of forget about, take the positives, and move on to the next race.

Do you equivocate it to first round jitters or that kind of thing?
You know I didn’t have jitters today. I just really struggled with my comfort. I felt really good the first practice, and then second and third practice I think I overthought it a little bit and tried to change some stuff and then went back to my base setting. It was just a little bit… I don’t want to say this, but like a rookie move, you know? I’ve been at it for a long time, I should have known better. But the team believes in me and they let me kind of make those decisions and luckily we went back before the main event. I was able to show my speed and what I’m capable of, just need to be better in the beginning of the day. That’s easy. Don’t make rookie mistakes. I’m not a rookie anymore [laughs].