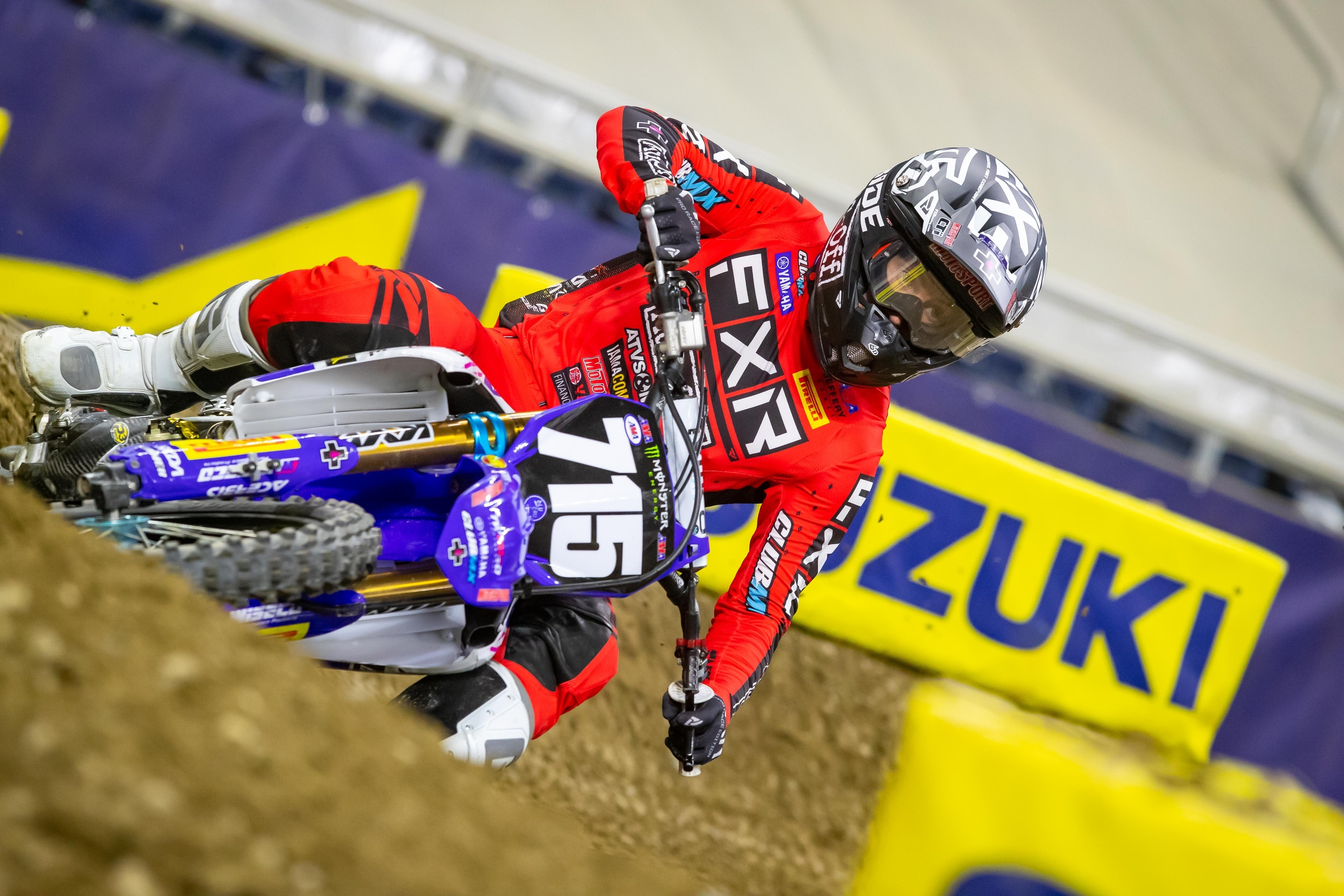 Our man Phil Nicoletti will be back racing soon in the 250SX West Regional Championship when it kicks off at Anaheim 1 on January 7. Nicoletti will have #69 aboard his Muc-Off/FXR ClubMX Yamaha YZ250F for 2023. Also, he'll continue answering your questions!

Hi Phil, hope your prep is going well for A1 and you’re staying healthy.

Once again, as life would have it, I’ve been laid up on the couch and watching a lot more football than I would like. One thing I noticed was how some players use mouthpieces. It made me wonder about the use of mouthpieces in MX/SX. I think Eli Tomac uses one, I remember Blake Baggett with one back in the day, but I don’t believe too many other guys do. I assume they’re use is for concussions prevention and/or preserve your dental hygiene? When I played football, I would immediately take mine out as soon as the play was over, primarily to catch my breath. But it’s not like you can do that during a 30-minute moto. What’s your thought on mouthpieces, have you tried one, how many guys use them, if so why, etc.?

Hey Mate,
I actually never really thought about that. Honest truth it’s never even really crossed my mind to use a mouthpiece. It is becoming more and more frequent with pros and kids nowadays. But I truly believe it’s something that starts as a kid and kind of just sticks with you. Like ear plugs for instance. I cannot wear ear plugs. I do not care how loud a dirt bike is, I need to be hearing if something is going wrong with the motorcycle. Not saying a mouthpiece is like that, but if it restricts my breathing in any way, I’m not using it, haha. I have knocked my top four front teeth out, so I’m aware of the pain and how that scenario works. It does not feel good. Maybe a mouth guard would have helped, who knows. I don’t think I could gel well with a mouth guard while riding. I think it’s rider preference.

Hey Phil,
Huss'Daddy from AMA D34 back in the day here...glad to see your out there still Riding Hard...Riding Smart and Having Fun....WoooooooHooooooooooo!!

Naturally all your fellow Sullivan Countyites rooting you on.

My question surrounds another former D34 Racer, Justin Barcia. Does he look like a brother to UFC fighter Paddy "The Baddy" Pimblett? You might need to Google him, or maybe you’re a UFC fan just because throat slit gestures seem to fit.

On the Barcia subject, do you guys go way back into the New York days, or did you not cross paths back then? Were you buddies in the JGR days? I know you don’t take any grief out of the track. Did Filthy and Bam Bam ever get into it? I’m just wondering if you guys are buddies because of your backgrounds and styles or if it’s actually the opposite.

Wishing you and JB all the best for the upcoming season....when in doubt...hang it out!!!
Huss'Daddy 878

What’s up Huss!
Of course I know who Paddy “The Baddy” is. He and Bam do look quite similar. Maybe Bam could incorporate Paddy’s hairstyle in a little bit. I think he could pull it off quite well. Bam and I do go way back. His parents Lorraine and Don took Justin and I to Mini O’s in like 2003ish. Bam was just a little rug rat with ADHD off the wall haha. I’m about 3-4 years older than him, so we were kind of in a different area of amateur racing. But when you get older, the sport gets tough. If you don’t ride on the same team, and around each other all the time, no one really talks. On Saturdays, I do make a point to go see some friends at other semis like Coop, Mirtl, Weltin, etc. But mostly if you’re under your own semi, you don’t really venture out much. So at JGR we did see each other a lot. We did have one big run in with each other then kind of imploded a little bit when he cleaned us out at Muddy Creek when we were running second and third back in 2016. So that didn’t go over to well to say the least. But as usual, it always ends up with a, 'Sorry I didn’t mean it,' haha.

While these events have passed, Paddy Pimblett does look like he could be Justin Barcia's brother!

A post shared by Paddy THE BADDY Pimblett (@theufcbaddy)

Hi Phillip. I saw a Club post with Twisted Development testing engine stuff with you and J-Mart. We know how important a fast 250F is outdoors. What are you looking for when you’re building an engine for supercross? Max power or just moving the curve around or what?
Scott from KC

Scott,
Yes, Jamie from Twisted came to town for two days. We had a few new things to try with him that ended up being better for me. Jeremy tried some things as well, and he liked some of the packages from 2022 that were developed. I ventured more to the newer base point that was developed for 2023. Peak number is always so blah. I don’t really care too much about that. For me it’s how the engine builds the power. I’m a torque-driven guy, so I like rotating mass in an engine. I think that comes from riding a 450 for years and years. Peak HP number I feel is virtually useless to me anyway. But when he was here, it was a lot of mapping stuff because the dyno and track feel are so much different. They can get it close, but the load of a dyno gives compared to the track is much different. I grew up doing so much jetting as a kid with my father, changing needles, main jets, pilot jets, leak jets, etc etc. Running my 60’s, 80’s, 125’s, 250F’s up and down a corn field trying to make the bikes as fast and as crisp as possible. Coming back saying if it was better or not, and back and forth. So when Jamie comes to town, and having his knowledge to understand where I’m talking about in the power, and watching throttle position and RPM, is absolutely priceless. Having someone that understands what you’re saying and can then relay it to the fuel chart and implement it into a map is so key. I’ve been very fortunate enough to be around some good engine guys like Dean Baker back at JGR. Because let me tell you what, if you get a Joe Blow there and he plugs in and doesn’t have a clue what he’s doing, I’d highly advise to abort mission and tell him to unplug. Just a word from the wise.