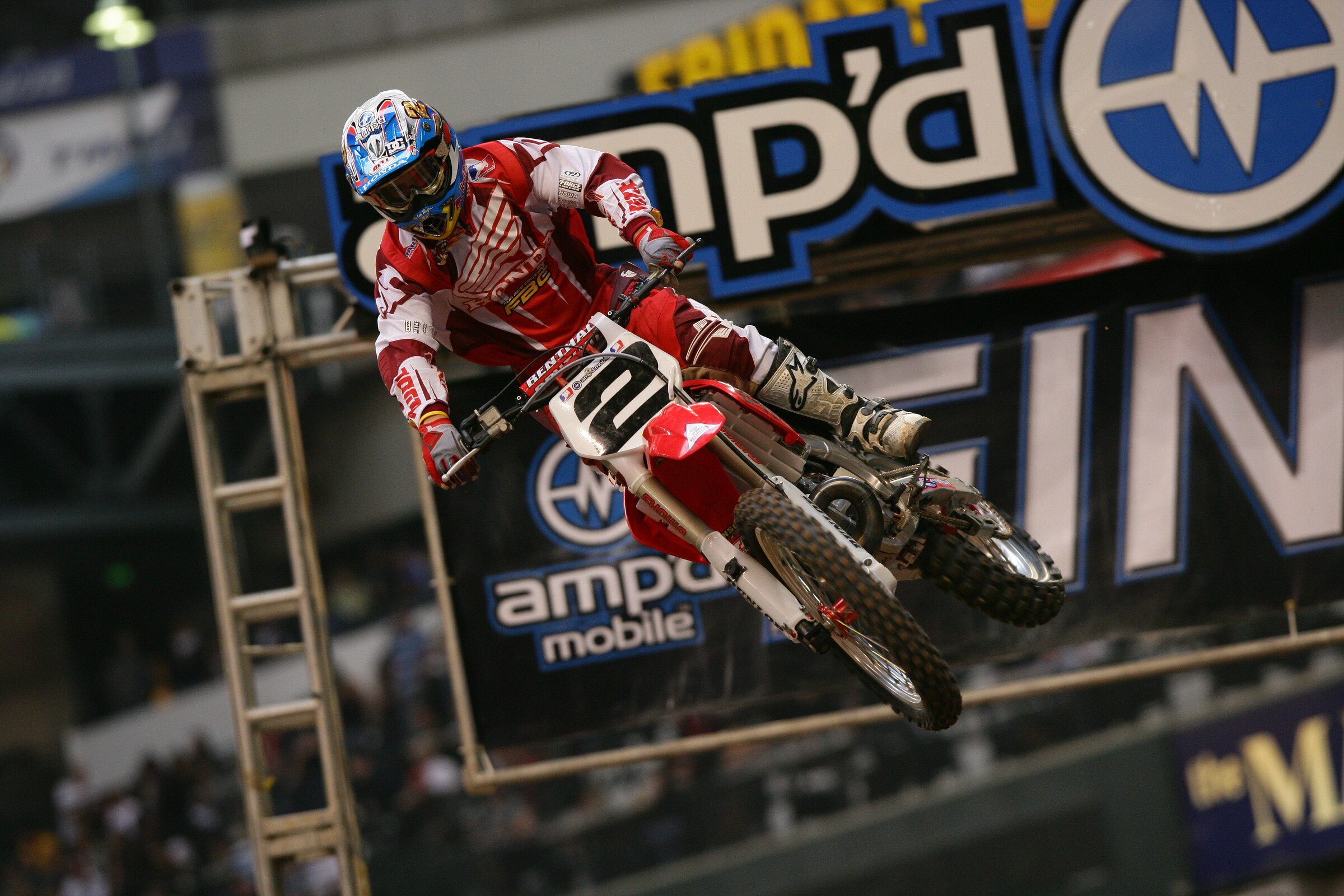 Between the Motos When The King Came Back

Jeremy McGrath is the King of Supercross, with seven AMA Supercross Championships and 72 main event wins, records that will probably never be broken. In the 20-plus years since his last race win, though, McGrath has also carved a reputation as a class act off the track. McGrath is secure in his legacy and his accomplishments, but never has to remind anyone how good he was. He’s too cool for that.

As proof, McGrath made a brief comeback to racing two years after he announced his retirement. He was having fun and wanted to prove he could still ride well, but he also admitted, immediately, he wasn’t going to win races anymore. When MC returned to the track, the sport was about to enter the Ricky Carmichael/James Stewart/Chad Reed era, known for launching perhaps the most serious rivalries in the sport, a high-water mark for peak performances, mind games, and drama. Even today’s racers, growing up watching those battles, can only tip their cap.

“I just had three guys that I loved watching, and that was RC, James and Chad,” said Eli Tomac in a recent video.

McGrath wasn’t out to show the new stars what it was like back in 1993. He was just looking to have some fun.

What’s forgotten is that when the Reed/Stew/RC trio finally lined up on the same gate for the first time, McGrath, who had retired right before the 2003 season, was on that starting line with them.

“My goal was to get fourth!” he said in a recent edition of the Leatt Re-Raceables Podcast with Steve Matthes and Jason Weigandt. “Those three guys, Ricky, Chad and James, they were all so good and they were all up and comers. They were basically replacing me. I love the sport so much, those [three] guys were so great, the last thing I wanted to do was get in the way.”

“You know, the way I look at it, I retired for real as far as racing for points after the KTM situation,” said McGrath, who planned to switch to KTM for the 2003 season. But he never gelled with the bike, as KTM was still not ready for prime time in supercross. Instead, McGrath crashed at the test track and hurt his hip, then came back for the European rounds of the World Supercross Championship in December. He struggled, not even close to his old standards. Before Anaheim 1 of 2003, he decided to hang it up. In ’03, he would still show up at most of the races to ride a parade lap and salute the fans. But he was done as a racer.

“The next year (2004) I took the time to just cruise, figure out my deal, and I was still loving riding my dirt bike. The next year, I started testing for [Erik, Team Manager] Kehoe at Honda, and I was riding pretty good. So, I felt like, maybe I should ride a race or two? Because the way I retired, that wasn’t the way I had planned it in my head at all. It wasn’t good. So, I was riding good, feeling good, so it was just like, 'Let’s go and have some fun!'"

McGrath says he wasn’t even getting paid for the gig as a racer. He just wanted to do it. His return had the perfect retro touch, too, because he was back with Team Honda, the brand behind his first four championship seasons. And while the transition to four-strokes had begun, MC was still piloting a CR250R two-stroke.

“It was kind of the end of the era, phasing out two strokes,” McGrath explains. “So, the writing was on the wall for that. It wasn’t a big deal; I was just riding a test bike so they didn’t have to prep an extra race bike. I was riding the same bike I would ride at the test track.”

McGrath’s first few races were mixed. Anaheim 1, the first race back, was an all-time mud fest dubbed “The Perfect Storm.” McGrath admits he pulled off, because he says he came back to race, but not race in the mud! He did give the crowd some Showtime to cheer for, though, when he led the first lap of his heat race in the slop that night. By round three at Anaheim 2, he finished fifth, which would be his best of the seven races he rode in ’05.

He came back again in ’06, even better. By then, the four-stroke revolution was nearly complete in supercross, so MC gave the two-stroke the perfect send off, holeshotting the main event in Phoenix. Two-strokes weren’t supposed to be able to get starts anymore...but this was The King!

“In Phoenix, I raced the two-stroke, and I would consider this the last holeshot ever for a two-stroke,” he says. “They had the split lane start and I came out with the lead. Then I did the full Guy Cooper, which was to do a trick on the first lap. I did a big Nac-Nac on the triple on the first lap, right in front of [Ernesto] Fonseca [teammate], which was probably not the smartest move. But I knew I wasn’t going to win the race, but I figured I should at least make it memorable!

“I finished fourth that night, which felt like a win, because I wasn’t going to beat the other three guys, Reed, Carmichael and Stewart.”

The four-stroke advances were coming. After that night in Phoenix, McGrath put the CR250R on the stand for the last time (this 2006 bike is actually the one Ken Roczen used to race and win Red Bull Straight Rhythm in 2019). He switched to the CRF450R and kept ripping. He was fifth in his first race on it, then 16th in Anaheim 3. Then came San Diego. Once again, The King holeshot, led and took fourth. Along the way, he even went wide and let Carmichael go by him, nodding with respect to the new leaders of the sport.

“I was testing both [two-strokes and four-strokes] at the time, so it kinda made sense,” said McGrath.“ It was like, 'Let’s just see how I do?'

“That night, I think I got the holeshot in the main, I ended up fourth, and I came up to the podium to collect the holeshot award. Being up there with those three guys, they’re spraying champagne and stuff, it was a pretty memorable moment. It felt nice, really vindicated, so I decided to stop right there. I like the way it ended. I just knew it was not going to get better than this, and it was a bit of a re-write to the end of my career. The way I had retired… I just didn’t want people thinking that I couldn’t ride!”

McGrath owns so many records, but for his era, he also was a leader in longevity. He won the 2000 AMA Supercross Championship at age 28, making him the oldest champ ever until Eli Tomac finally took that mark away this season, winning a title at 29. In McGrath’s era, riders were only starting to remain competitive into their 30s, which is becoming common now. When he retired before the ’03 season, it seemed correct from a timing standpoint.

“I don’t really call it a comeback,” he says of 2005 and 2006. “I call it the moonlighting tour. I would call it a comeback if you came back and you’re racing for points. Like what Dungey did this year. Started out as a comeback but turned into racing the whole series.”

After the moonlighting tour, the King could now bow out gracefully. Following that night at San Diego, he never raced an AMA Supercross again.

“I have a great photo of all of us on the podium, and I have that in my trophy hallway,” says McGrath. “That’s what I consider to be my last, greatest moment of racing.”

Listen to the full Leatt Re-Raceables Podcast with McGrath below.