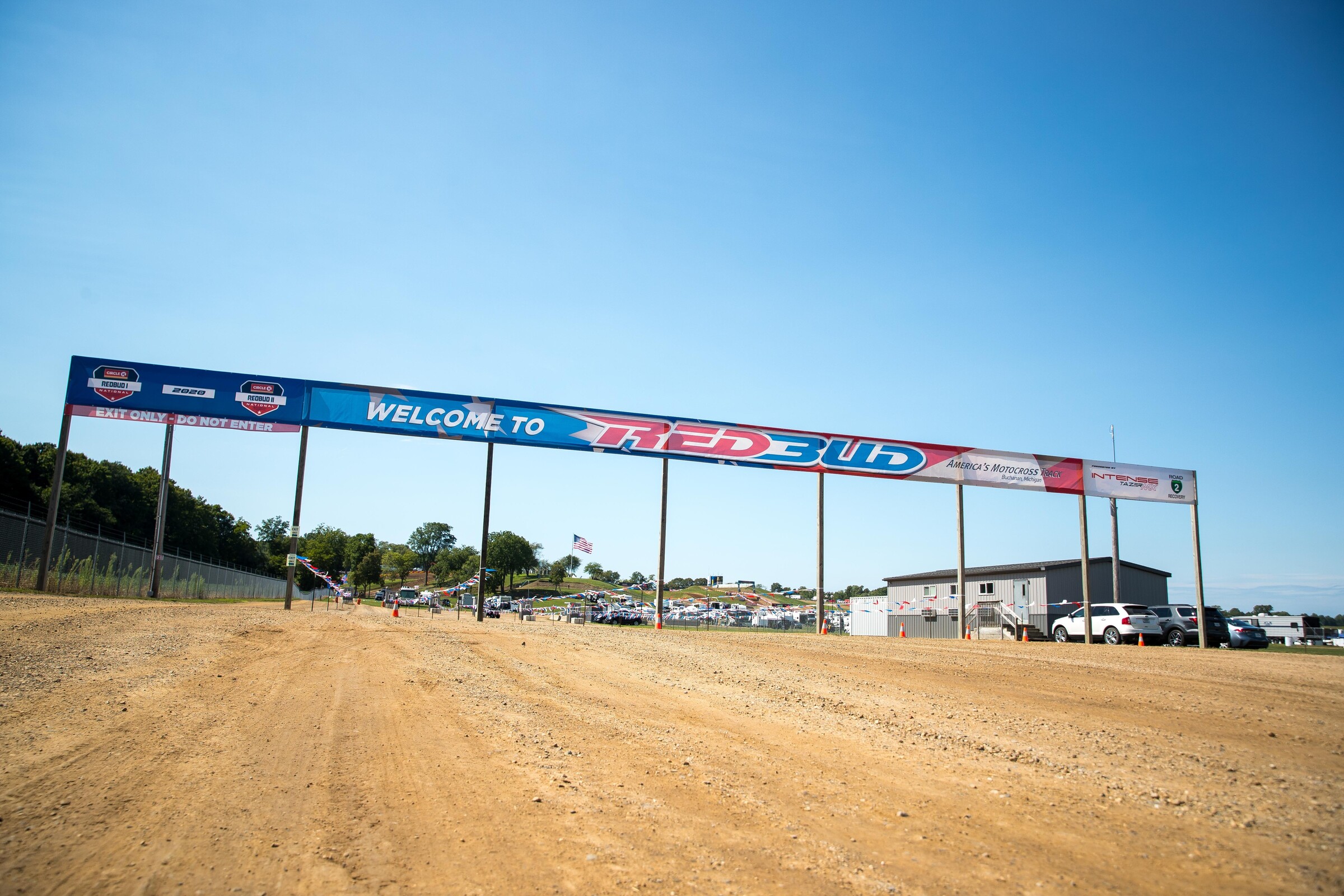 For the second time in five years, Redbud is hosting the motocross world for the Motocross of Nations this coming weekend. The promoter is In Front but the man who owns the track along with his sister Amy, is Tim Ritchie. We caught up to Tim on the Pulpmx Show this past Monday night to talk to him about what it’s like to get his place ready for an event like this and more.

Racer X: For you, this is the second time. What are you doing different this time, if anything, from the first go-around? What did you learn the first go-around? Obviously, the weather played a factor in things, but what are you doing better this time around?
Tim Ritchie: Well, the weather kind of mangled it last time around, for sure. I’m running the same exact racetrack. Their event manager came out and did a site visit earlier in the year, and I told them we got a lot of flak last time over making the track GP style. And we didn’t. I changed the starting line. I’ve been running the starting line since then. Nobody thinks that’s a GP start or anything. We did that to house a pit lane, because it’s 240 feet long or something crazy. We cut that off-camber off last time, because that had a certain meter of track length they wanted for TV or whatever. But I told them I’d like to run the same, exact layout, and he agreed and said, “No problem.” So, the track layout is identical. I always tweak things here and there to try and make it work better or whatever. But same exact layout. No extra sand. Couple inside bumps here and there. Just the normal thing I touch up here and there.

The weather is looking pretty decent. We’ve got a couple chances of some rain. Other than that, everything else was just the stuff we didn’t know last time. The weather just ruined it last time. I felt like I spent the whole weekend in a bulldozer. I look at the schedule right now, and the schedule for the event is so slow paced. It’s one day of racing kind of spread out over two days. It’s kind of hard for me to wrap my head around. Saturday is three practices, three races. That’s the whole day. For track prep for me it’s like, I don’t need track guys. We’re not going to do anything. If it all goes well, we’re not going to be throwing water on it, I hope.

So, what about infrastructure? Did you change anything up, or did you learn things from the first time around?
We’re doing most everything the same. It took us a lot of time to figure out last time, but if there was anything that didn’t work, we tweaked a few things. Their compound is in the same area in the paddock. The USA compound is in the same area in the paddock. Start line structure, all that stuff is the same. That stuff was fresh build last time, so it’s kind of nice to go into it this time and have some drone shots Le Big did for us and have kind of a cheat sheet and be like, “This is how the fencing was in this area last time.” Their podium, their pit lane structure, that’s very complicated with how they sent it. There’s a lot in the middle. There’s a lot on the sides. Little things we had to figure out last time we don’t have to re-figure out again. We can kind of just go off of last time. So, that’s kind of nice.

The VIP stuff is a little different. Parts Unlimited/Thor had the infield section last time. It was just a whole mud spot, so we kind of booted them and gave them our VIP South, which is by that off-camber section. We’re doing the same VIP that we did for the national. We split those grand stands apart, moved them to the ski jump. It’s just an open set of grandstands we don’t charge for now. The VIP tent is right in the center of everything, where we had the “Jett Zone” for the national. That’s got its challenges. It’s locked in the middle of the infield. A lot of parts and pieces that we’re just trying to put together.

So, the reason for the start moving back then, was because of pit lane, correct? Yeah. Not many tracks have it. 300 foot-long, perfectly straight section.

Have any riders had any comment on that? Do they miss the old start? Or is that kind of just going to be the new thing?
I think everybody agrees it’s way safer. There were some guys that liked that old start, but it had that full acceleration throttle chop, back to acceleration again that would always cause problems sometimes. So, I don't think anybody disagrees that it’s safer. It’s a right-hander, which is kind of backwards, no foot on the brake. But the 180 for a start, it’s kind of slow enough. We don’t have big problems with it ever, really.

What goes through your head when you’re setting that up? Do you think, I’m going to make it tough, I’m going to make it easy, whatever?
I think JT explained it once perfectly. I kind of want all the 450’s to be able to do it from the outside. The top five guys will be able to do it from the inside, maybe. The top five or six 250’s would be able to do it from the outside. That would be a perfect setup. It helps racing a little bit. It keeps the four guys from not doing it. For the national, we have an aspect that we don’t for this, which is amateurs. We’re racing amateurs the day before, the day after. I’ve got to have something to kind of keep those guys in check. We’ve got B riders or C riders trying to do it, which is obviously dangerous. So, for this, we don’t have that.

Something people pointed out to me originally was that this race has some really, really slow people in it. Saturday MXGP there are some super slow guys out there, and the track has to be safe for them, too. I think it’s good where it’s at. I’ve got a pretty good wall around the outside of it. The inside, like I said, probably fifteen feet out from where it was. I may or may not have had some people on it riding, checking it out a little bit. I think it’s where it needs to be.

What’s it like the second time around? Is this a little easier process for you? We talked about the weather, but just infrastructure, nerves, things you’re wondering about? A little easier for you this year on the nerves? How is the mindset as a promoter when you think about all these people from all over the world coming to your place?
You would think it would be easier, but it really hasn’t been. A week ago today, last Monday was like Monday of the national. Just wide open. The day has just been silly and it’s just going to keep getting worse. I don't know. We didn’t know last time, so we weren't worried about it. Now we know what’s coming and we’re trying to get it right. We’re always trying to get it right. The guys from Budds Creek are here already and they’re like, “Dude, the place looks awesome!” That’s cool to hear, but we’ve got to keep executing it. One little screw-up could just throw a big monkey wrench, and then everybody is talking about it.

You got some flak last time. People thought you dumped a bunch of sand on it. We had that new start. Which, you did put sand on the new start, but it was because it was a brand-new start. USA didn’t perform, and the weather was terrible. Some of it bounced back on you, the track owner.
Yeah. The video (Troy) Adamitis did, and it was a very well-done piece, but I remember the part about AP talking about, “Why would you do that a perfectly good track?” It just crushed me. I was like, dude, I didn’t change it that much. I really didn’t. It was a track that those guys would never see in July. You don’t get three days of rain coming through in the middle of July. So, I don't know. I hope we don’t have that scenario again. If we don’t, the pressure is obviously on. The pressure is always on. If the track is good one year, you want to be good the next year.

For sure. How many people do you expect to go through the gates?
We can put a couple thousand more people that want to come. I don’t have any idea. Honestly, they announced 82,000 last time. Weekend dependent. I think that may be a little creative accounting. I don't know. We don’t own this event. We’re the organizer. Obviously, there’s a profit share in most things, but we don’t control it. Honestly, we don’t know other than what they told us for the numbers.

What’s the cleanup like on Monday?
Well, after that last one, it was pretty rough. It looked like a war zone. I don't want to think about that again.

I didn’t think I was getting out on Sunday night. I was like, “Oh, guess I’m just going to live at Red Bud now. I’m not getting out.”
We pulled people out until 1:00 in the morning and we didn’t get them all. There were still 100 people left.

How is the track prep? Is there any track prep between Saturday and Sunday? Not really. There’s not enough time for it to get rough. That’s the weird part, for me. This track, as it goes, it tightens up.  As it dries, it kind of tightens. On a long amateur day, it’s like, I want to get through it so I can open the thing back up again and get moisture back in it. I’m a little worried about that. A little concerned about that. But I talked to them a little bit and if we have corners that aren’t working or something, we’ll be able to tweak those. So, we’re definitely not going to flatten anything out. We’re going to leave anything that’s getting rough. Throw some more water on it and just let it keep getting rough. Hopefully minimal amounts of track prep.

Are we going to do a Pit Bike of Nations again? I’m going to try to get this bronze medal again.
I heard there’s some debate whether you actually got the bronze medal last time.