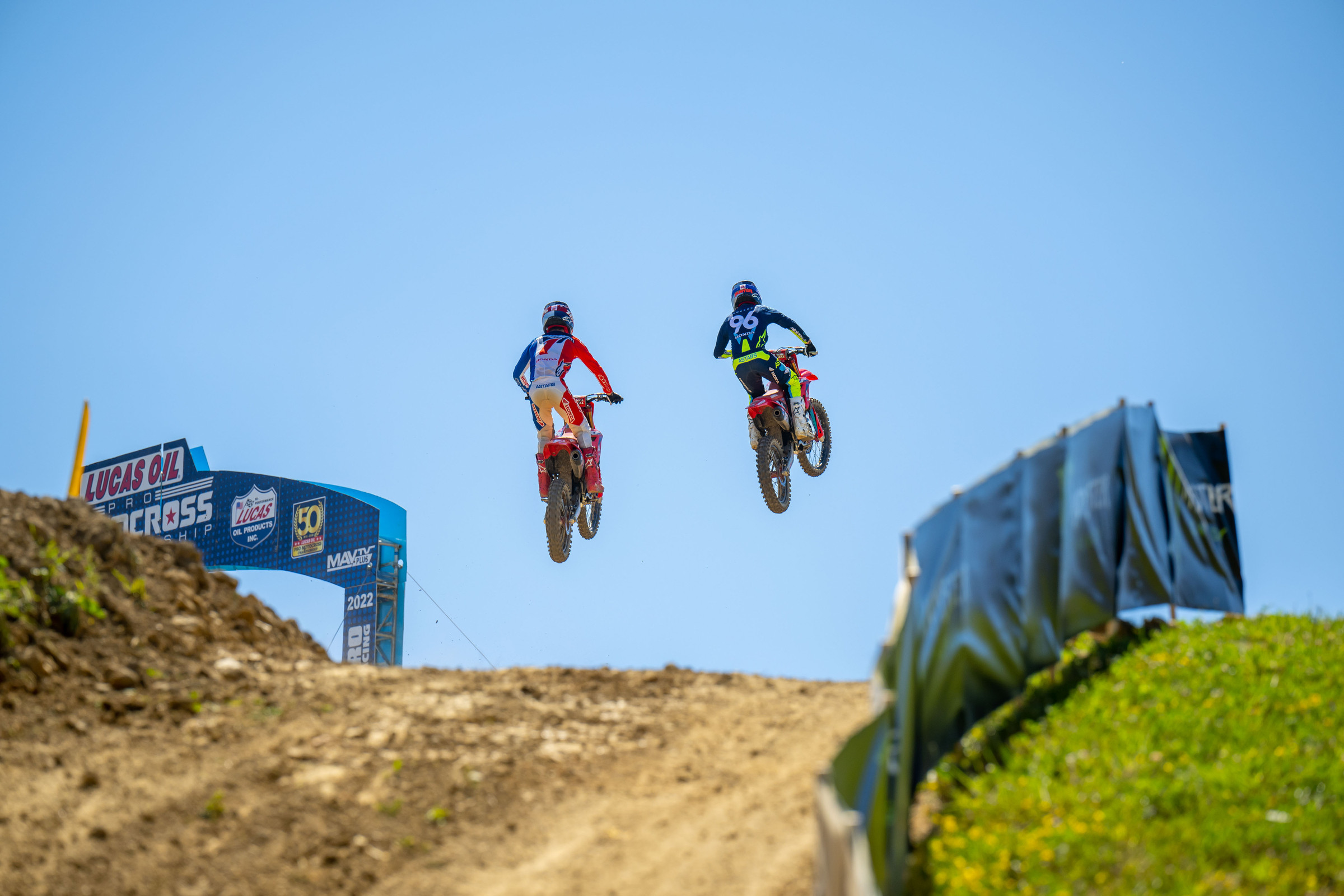 This one has been brewing for a long time—a lifetime, kinda. Jett and Hunter Lawrence have reached the top spots in the 250 division of Lucas Oil Pro Motocross, running 1-2 in points since the first moto of the season. They haven’t had a chance to battle each other much, though, as usually one gets a good start when another gates deeper in the pack. At High Point’s second moto, though, it was on. Hunter and Jett were quickly 1-2, and after Jett fended off a quick attack from Justin Cooper, there was nothing left but 30 minutes of Lawrence v. Lawrence.

It didn’t disappoint! They passed each other several times, and the gap stayed close the entire time. Even when Jett tried to stretch it over the final laps, Hunter made a last dash to get close again with the checkers in sight. Final margin? Jett over Hunter by .5 seconds. It was awesome. Let the Lawrence brothers tell you all about it.

Hunter, second place. Blazing fast. You have to be pleased with today’s effort and performance. Tell us a little bit about the track, the conditions, and your race day.
Hunter: It was a good one. Me and Jett went one and two the first one and then two, one, me for the second one. So, it was cool. It was tough. It was a coin toss in that last one, honestly. It was so close. The track was tough today. It was more not flowing and stuff like that. It wasn’t a traditional High Point, I don't think. So, it was a tough one. The track was gnarly and it wasn’t easy to flow. It was literally a 35-minute sprint that last moto, from the gate drop. We were sprinting the whole moto. It was I think pretty cool to watch. Third place was 36 seconds behind us. I set the fastest lap time of the race on the last lap. That’s when I did it. It was cool. I’ll get him back next time. There’ll be another time for sure, and there’s going to be many more good motos just like that one. I think it’s cool. It’s the race everyone has been wanting to see for a long time.

Absolutely. When you guys match each other’s consistency lap after lap, you guys are within a half a second at the finish, that tells you everything is going right during the week, correct?
Hunter: Yeah, absolutely. A few more laps I think I would have passed him back. It was literally just how long the moto went on. We passed each other four times, which felt like ten times. It was definitely interesting.

Jett, you did what Jett Lawrence does. You sat there in second place and third place in both of the motos for three or four laps. When you felt like it, you could close the gap when necessary. Your willingness to cross the line a little bit, you’ll take a bad line, you’ll let it hang out a touch maybe in an untraditional position. Where does that come from?
Jett: The track was a fun layout. The track is fun, but the main line is always the fastest. It was pretty one-lined. In that second one, thankfully I had energy, not like last weekend where I had nothing, so I was able to fight a bit. But, whenever we’d pass in a certain spot, the next lap if I got Hunter somewhere, and then we would go back to that line and they can’t use it. So, it was always kind of playing, not cat-and-mouse, but we’re smart enough to know Hunter got me here, so then every lap when he was behind me, once I got him back I would stay to the inside so he couldn’t use that line again. So, it was a fun race to just go back and forth. We know we can push the limit hard. We get close to each other, but we know we’re technically good enough not to take each other out in that race. So, it was fun but very difficult because you’d have to use a passing spot and make sure you made the pass, because otherwise they would use that spot or that line.

That’s very interesting that you say that, because I used the term cat-and-mouse, as well. You were able to just have an uncanny ability to know where they were going to be, and just be able to protect that race line. Got a week off. Back to the mill, or are you going to have a little fun this week?
Jett: Probably same stuff. Nothing crazy. Just keep at it. Just keep chugging along. Obviously trying to get rid of this sickness still. Today was a lot better. I was able to push, like I said. But, hopefully we can get rid of this sickness fully and come back to Red Bud and be 100% again.

Hunter, you’re having a good season. To get the extension today with Honda HRC and then to ride like you did today, what did that feel like? Just talk a little bit about that and then the extension as well.
Hunter: Yeah, it was cool. Obviously, we did the two-year extension with Honda, which is awesome just because I love that team. I like to think they love me as well. It’s just awesome. Everyone works together so well. We all get along. We all communicate. Honestly, we’ve been through quite a few bad teams and stuff in Europe, and all we wanted was someone just to devote our loyalty to. We’re super loyal, and now we have the dream team. Like I said, we love them like family. We’ll be forever loyal to them. It’s cool. Then today with riding, we’ve been getting better and better, getting rid of this sickness. Today was pretty much close to 100 percent as far as health-wise. It’s been good. We get the week off to help get ahead of it, build up our immune system a bit more, and get ready for Red Bud.

Hunter, you guys, racing each other one-on-one like you did, is there comfort in knowing the guy you’re going against, you know his tendencies, but you know he’s not going to race you dirty? Is it tough to almost keep your composure like, it’s a race day, it’s not just a Tuesday at the track? Is it tough to keep that mindset of you’ve got to push, but you don’t want to push it too hard?
Hunter: Yes and no. I wouldn’t say you don’t want to push too hard because like we literally sprinted for the whole 35-minute moto. There wasn’t a lap where we were like, let’s preserve a little energy. It’s the last moto of the day. Leave everything on the table. But at the same time, I think you see better racing when we’re using passing race craft and stuff like that to make passes and mental decisions, and stuff like that. I think that is better to watch than, “Oh, there’s a guy behind me. I’m just going to clean him out.” I feel like that’s the easy way out. It’s not really what the fans want to see. I think compared to one takeout, one lap, they’d rather take a 35-minute battle. We finished 0.05 behind each other on the finish line. It was like that for the whole race. So, I think that’s what is cool because we’re not going to clean each other out or do anything stupid. We’ve never really been into that. It’s more fun to race clean.

Jett, what are your thoughts on racing him?
Jett: Basically most of what Hunter said is pretty correct. Our biggest thing with us, we know we’re not really ever going to back down. So, even those last laps, I got a bit of a gap on him through lappers, but then like he said, he finished a half a second behind just because he’s always coming. I think if it was vice versa, it would be the same. We’re always pushing, because the track this weekend, we had to use race craft a lot and kind of almost rely on a little bit of mistakes somewhere just to get next to him, so you could maybe put a front wheel and maybe put him off a bit. So, it was fun. I would much rather have that racing than racing some other guys that just go in and try to take you out. With us, we know that we don’t want to let each other pass, but we do it in a respectful way where it’s never we’re going to be coming off going, “Why the hell did you do this?” Or you end up getting all pissed. One, I would get my ass knocked down, so I know not to go there. But even we just like having fun racing and being close. We got close a good couple times, but it was never like, “Oh, we’re close!” We’re comfortable. We know we’re not going to take each other out on purpose.

You mentioned about him not giving you anything and you not giving him anything. You’re both going to fight to the end. Did you realize he was that close behind you at the finish?
Jett: I didn’t realize it was that close! I think it definitely was a little bit closer. I think he got that inside rut and came out, because that timing line [scoring transponder feed] is at the bottom of the up-ramp [of the finish]. So, I just kind of sent it through that rut just to get through it hopefully. If I went a little bit wider, I think he might have gotten me because he just went that tight line. I could hear him. There’s only one other bike out there that sounds like mine, that I know. So, I could hear him. I’m like, “Damn it! I thought I had a bit of a gap.” It’s cool because you like having that race where it’s the whole time 100 percent and just having that guy push you. It was fun. It was nothing crazy where you were like, I don’t want to do this anymore. I was more like, let’s keep going. It was good.