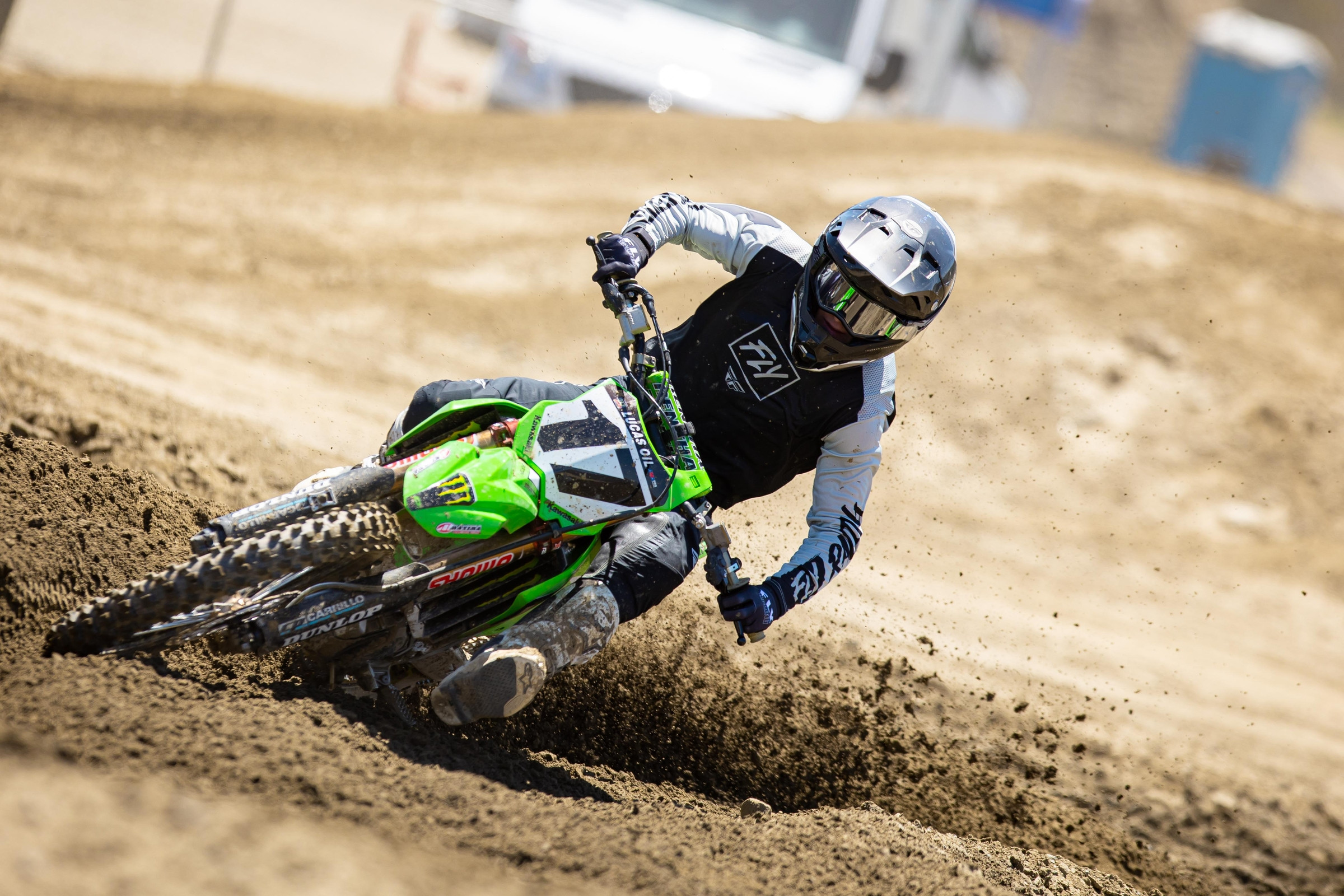 “It’s like we have the family back together,” said Laci Shantie over the weekend while out and about in Corona, California. Wife of Monster Energy Kawasaki mechanic Justin Shantie, Laci, who works at Monster Energy, was referring to the fact that her husband Justin will be working with Joey Savatgy beginning this forthcoming weekend when the duo set out for the first Lucas Oil AMA Pro Motocross Championship National of the season this Saturday at Fox Raceway at Pala in Southern California. Having worked together in 2019 when Savatgy was named Monster Energy AMA Supercross 450SX Rookie of the Year, nearly three years later Shantie and Savatgy will represent Mobster Energy Kawasaki in the 2022 Lucas Oil AMA Pro Motocross Championship as current team racer Adam Cianciarulo will sit the summer out due to continued injury recover following knee surgery. Dispatched to the green team after the demise of the Rocky Mountain ATV/MC-KTM-WPS in recent months, Savatgy, who placed ninth overall at the Pala National last September, is now in a position to make a serious run at the 450 classification title over the summer months. Bouncing back from a torn ACL ligament suffered at the Oakland Supercross in January, Savatgy is, for the most part, healed up, in shape and ready to roll. On Sunday afternoon, we tracked down the veteran racer in Southern California where he was dog sitting for the Shantie family.

Racer X: Okay Joey, if I have it right, you’re dog sitting this weekend for your former Kawasaki mechanic and now current day Kawasaki mechanic Justin Shantie and his wife Laci!
Joey Savatgy: Yeah, I sure am! [Laughs] If there is any barking during this interview, you know why.

Awesome. Alright, it’s the weekend here in Southern California and in precisely one week you’ll be lining up on your factory Monster Energy Kawasaki KX450SR at Fox Raceway at Pala for the opening round of the 2022 Lucas Oil Pro Motocross Championship. Something a little bit different for you, huh?
Yeah, it’s a little strange. Certainly not the normal preseason training that I’m accustomed to, but all things considered, I think we’re in a fairly good spot. I’m just trying to keep myself in the right mental space and to keep reminding myself where I’ve been four and a half months. As long as we can do that and continue to build, I believe we’ll have a good summer.

How is that ACL ligament you tore back at the Oakland Supercross round earlier this winter? Do you feel good about everything?
Yeah, everything has been good. I’m dealing with some minor soreness just from taking the four months off that I did. I’ve basically had to go full throttle straight into this. There has been some lower back soreness and just some body aches here and there, but honestly, the knee is the last thing, or one of the last things, that hasn’t been sore on me. As far as the knee, the knee is dialed and I’m just trying to take care of myself and to just get ready for this grind that’s about to start this coming week.

Have you, Justin and the Monster Energy Kawasaki team been able to put some time in on the bike and get things to where you want them beginning with the Pala National this coming Saturday?
Yeah, I think yesterday was day seven of actually riding basically since I did my knee. Considering that we’ve only one week of riding time, I feel like the team has done a very good job of getting me in a comfortable spot. Obviously, I’m back with [Justin] Shantie for the summer and he’s been my mechanic basically since I was a second-year pro. We have a great relationship and go back a long ways. He was with me for my first win [Note: Unadilla on August 8, 2015] and memory-wise we’ve had a great time and I look forward to that during the summer. As far as Oscar Wirdeman [team crew chief], I haven’t worked with him since I’ve been here. He seems like a very educated, smart man and you know I like the way he approaches things. Honestly, it feels good to be back. Obviously, I would love for it to be full-time, but I’m very aware that it is not, and I understand my role. Man, it feels good to be back with familiar faces and just to have the team around me. They’ve given me everything that I need to succeed and do my best.

This can be an excellent opportunity for you, huh? Your results were really strong last summer where you consistently ran and finished in the top 10 and the works Kawasaki KX450SR you’ll race come Pala is absolutely world class.
Yeah, that’s the goal. Like I said, I would have liked to have had a little bit more time to get ready, but it is going to be a grind. I’m ready for that and I know what challenges lie ahead. I think that if I can get back my signature starts, like I did when I raced this bike before, I think that I can put myself in positions early on to just learn and adapt and get up to speed as early as possible. Obviously, this class is no joke and between Eli Tomac coming off of a championship and my new teammate Jason Anderson winning the last four races, there are just a lot of good guys that have had a lot of seat time. Maybe they will be a little more worn down that I will be, but then again, they’ve had the last four months of actual riding time and seat time, so things are not as foreign to them. With all of that being said, I know what challenges lie ahead and I know it is not going to be easy and I’m fine with that. I have a great team of people around me and a good support group at home, I’m looking forward to it.

What are your goals? What will you hope to try and achieve through all of this?
Oh man, it’s too early for that. Every time I get on the motorcycle I want to win. Whether that is achievable or not, I think no one is going to win every time they go out and I think we see that all of the time. The goal is to be competitive. That means being competitive when we start off and to build slowly and being inside that top 10 and to escalating towards that top five. That’s the goal. If we get to the first round at Pala and things go a little bit better than we thought, then we are a couple of steps ahead of where we thought we would be. Like I said, I know my role on the team and the team has made it very clear that there is no pressure from their end to go out and to dominate. They want me to do well, but there is no pressure-based results. They’re very aware of my situation and how much time I’ve had with it all coming in. The goal is to be competitive. I would love to make it through the whole year healthy and continue to build and to kind of remind myself of how good I am because I think I have shown in the past that I am talented on a motorcycle. Sometimes it is easy to get distracted and forget about that stuff, but I do have a good feeling being on this bike and I guess we’ll find out here in about a week. I have to say that the bike is amazing. Some things that we struggled with when I was here a couple of years ago are some of the issues that the team has targeted on the bike since I’ve been here and like I said, being around familiar faces is always comforting. I’ve only had a week, but in that short week of riding I feel like we’ve made a pretty good amount of progress. We’ll ride three days this week and we’ll see how things are going to be. Yeah, the bike is very good and being around these familiar faces is really comforting.

What a cool way to land on your feet for this summer of racing, huh?
One hundred percent. It is unfortunate that the KTM team folded that I was on, but if there was ever a blessing in disguise for me, this time things happened to work out for me. It’s never ideal if you have to fill-in for a racer because somebody got hurt, but to have the opportunity to just fill-in and just the way everything unfolded, things happened to work out for me. I couldn’t be more thankful for the opportunity from Kawasaki and I’m just looking forward to doing my best and just trying to make Kawasaki happy with the decision that they made.

And you’ll be teammates with Jason Anderson.
Yes, we’ve been around each other for quite a while. We were teammates in 2014 and then even last year we were riding partners in Florida, and we rode together quite a bit during the week. Even between races we were grinding and doing a lot of our stuff together. Jason and I have a good relationship. From the outside people think, “Oh, Jason is just very laid back and just doesn’t care that much.” I know Jason on a much more personal level and ae been around him a lot and I know the guy grinds. He’s a very hard worker. I’ll take my hat off to him because he's done a good job of portraying the image of being laid back, but when it comes time to ride and going through his program, he’s very, very serious. I have a lot to learn from him and I think he’s a great teammate to be around and to earn from. He’s got a lot of momentum coming into the outdoor season, and I’m going to try and listen and learn all that I can from him and the entire team.