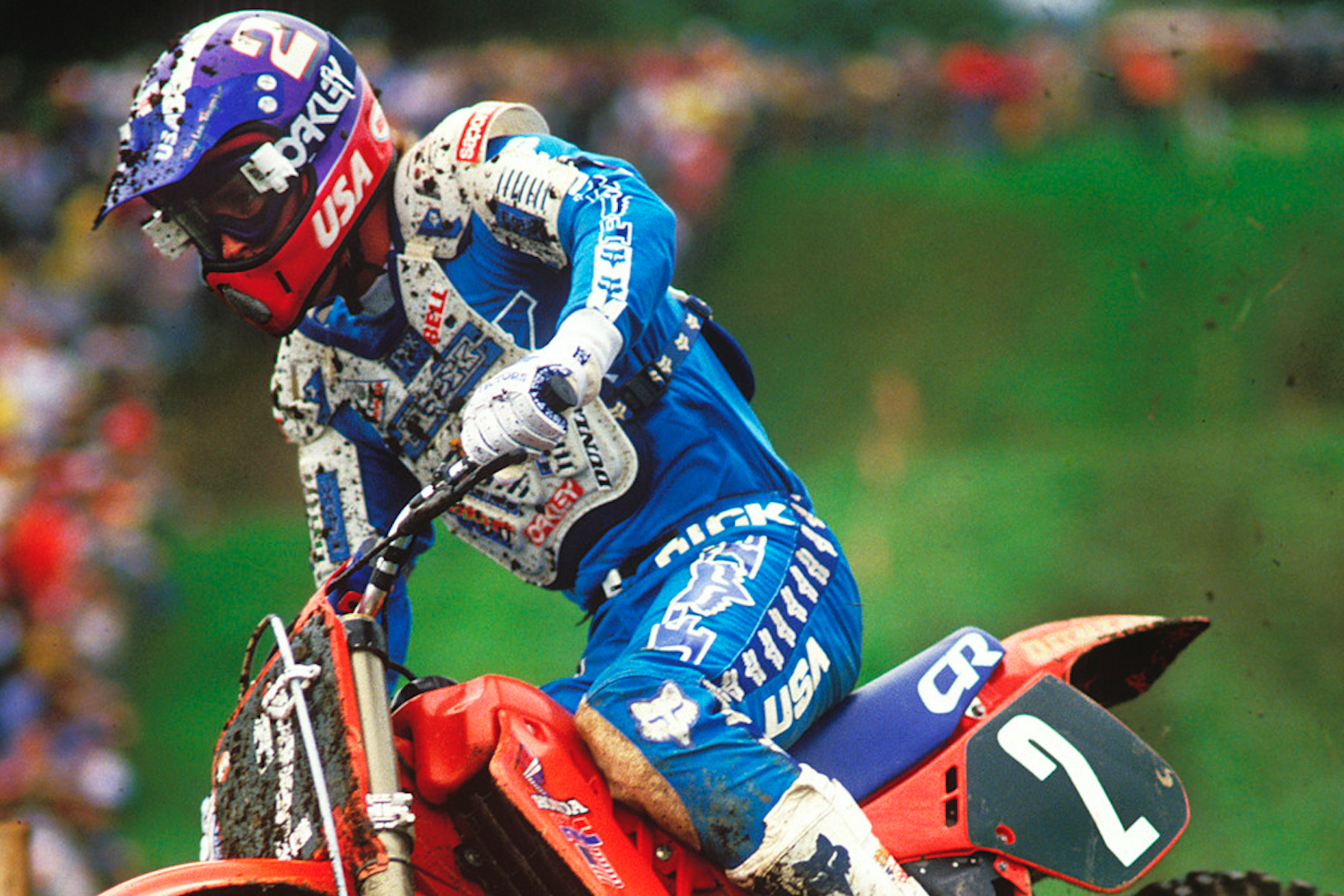 We are now up to 1987 in our MAVTV+ 50-Day Countdown to Lucas Oil AMA Pro Motocross Championship and the 2022 season opener, which is set for May 28 at Fox Raceway at Pala, California. This summer will be a celebration of 50 years of AMA Pro Motocross and today the countdown takes us back to one of the more complicated years for the sport.

It all started on a very somber note when Team Honda’s David Bailey, the reigning AMA 500cc National Champion and runner-up in both the ’86 AMA Supercross and ’86 AMA 250 Pro Motocross Championships, as well as a Team USA hero at the Motocross des Nations since 1982, suffered a broken back during morning practice for a CMC Golden States MX Series race in Huron, California. He would undergo emergency back surgery to stabilize his spine, but he unfortunately would never race motorcycles again. Fortunately he did stay within the sport, promoting events, working as a designer and then becoming arguably the greatest color television analyst SX/MX has ever known. He also became one of the world’s greatest triathletes.

There was also a war between old supercross business partners-turned-enemies Mike Goodwin and Mickey Thompson that was starting to get more and contentious. More on that in 1988.

When the series did start on January 31, defending champion Rick Johnson got knocked out, and laid motionless on the track. In light of what had just happened three weeks earlier to his friend and teammate Bailey, it definitely dampened the night. Johnson would be okay, but he would start out the series 25 points behind Kawasaki’s Jeff Ward.

After Wardy also won the second round at the Houston Astrodome, Johnson rebounded to win round three at San Diego. But the night was marred by another tragedy, as 125cc race winner Kyle Lewis would find out after the checkered flag that his father Matthew Lewis had suffered a fatal heart attack during the race. It was the first win of Kyle Lewis’ career, and it came in only his second start.

Also of note was the fact that Honda privateer Ricky Ryan shocked everyone at the Daytona Supercross, putting it to all of the factory riders on a muddy, slightly miserable day. It was the only time in AMA Supercross history that a true privateer won a premier-class main event.

In the end Johnson could not make up the early deficit on Ward in AMA Supercross, and the Kawasaki rider ended up clinching his second SX #1 plate in three years. But Johnson would turn the tables in both of the outdoor championships they ran together, the 250 in the first half of summer and the 500 class toward the end. This marked the first time in AMA Pro Motocross history that a single rider won two outdoor titles. The young Yamaha rider Jeff Stanton from Michigan would finish second in the 500 class while Ward would be the runner-up in the 250 class.

The 125 class once again went to Micky Dymond of the Honda team, who topped Suzuki’s George Holland by 22 points to join Marty Smith, Broc Glover, and Mark Glover as a back-to-back AMA 125 National Champion.

As the season ended the FIM Motocross des Nations was held for the first time in the U.S., at Ward Robinson’s Unadilla in New York. There, the American trio of Johnson, Ward, and the veteran Bob “Hurricane” Hannah on the 125 earned a popular homeland win.