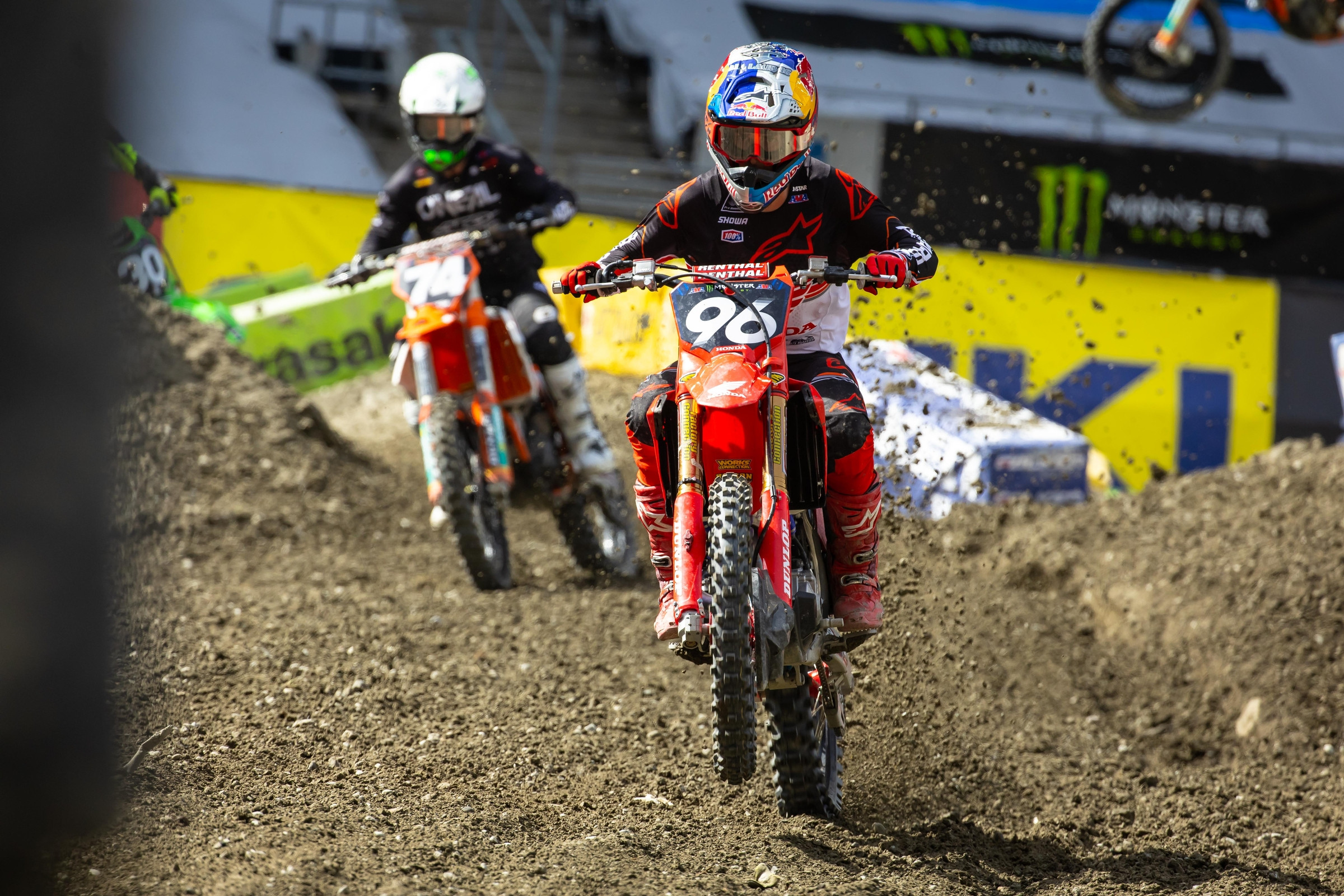 Aggressive the riding has been a common theme this season. Most recently sparks flew between Justin Barcia and Jason Anderson after Barcia threw an aggressive pass on Anderson, which resulted in Anderson hitting the dirt. Barcia went on to take second (he was later docked three points and $3000 for his move), his best result of the year, while Anderson took sixth. We’ve watched a revolving door of riders making contact this year, led by the Anderson/Barcia/Malcolm Stewart trio. We believe all three of these riders want to put this stuff behind them and avoid further crashes, fines and penalties (Barcia was already on probation which is why he took a penalty, and Anderson is on probation as well). They might not have intent, but the close competition this year has left everyone looking for an edge and exploiting all openings. It might come back again in Seattle.–Aaron Hansel

Last week in this column we wondered if Eli Tomac, with his huge points lead, might be tempted to ride conservatively in an effort to maintain a healthy championship picture. Well, he definitely wasn’t going for it in his heat race, and he wasn’t as aggressive in the main as we’ve seen him in the past, but it seems pretty safe to say he’s got a healthy appetite for wins. In Indianapolis he didn’t need to pass Barcia for the lead, Anderson was several positions back, but he went by the #51 anyway, which can occasionally prove treacherous. Look for Tomac go be going for his fifth win in a row in Seattle. –Hansel

If there’s one thing that can shake up a championship battle, it’s foul weather, and if there’s one round that always has a threat of rain, it’s Seattle. For guys like Barcia, Malcolm Stewart, and Anderson, as well as Lawrence and Mosiman in the 250SX Class, it’s an outside chance to take advantage late in the season and get themselves somewhat closer to being back in the hunt. Will we see a big shakeup in Seattle? -Hansel

Back on the Gas

Whatever’s gotten into Marvin Musquin lately has made a big impact on his results. The Red Bull KTM rider was extremely fast in Detroit, and despite crashes and visor problems, still charged all the way to fourth. And last week in Indianapolis, he was on boost yet again, this time taking third, his second podium of the year. Musquin seems to have figured out a few things, and with the championship coming into Seattle, a round he’s won twice, he might be poised to break through for his first win of the season. –Hansel

When the gate drops in in Seattle it’ll mark the return of the 250SX west region. But where did we leave off? Well, Christian Craig has won four of the six races, and not surprisingly, holds a 28-point lead over Hunter Lawrence in second. Lawrence, who’s won one race, is ahead of Michael Mosiman, who’s also won a race, by a single point. With Craig’s dominance of the class, nothing short of disaster will get between him and the title, but the battle for second promises to be good. Don’t expect Lawrence or Mosiman to give each other an inch this weekend. –Hansel

Honda HRC’s Chase Sexton took home a fourth-place finish last week in Indianapolis. In missing the podium, that result could look like a bit of a failure for Sexton who has been blazing fast all year long. But the positive of last week is Sexton felt he just rode a solid main event and avoided any carnage by staying off the ground. It’s a small reset, but Sexton putting in a solid result and full main event might be a small springboard back into a normal trend for the Honda rider. Watch to see how he approaches the race today in Seattle to see if he’s still looking to build. –Kellen Brauer

Rockstar Energy Husqvarna’s Dean Wilson put in his best result of 2022 last week with a seventh-place finish. After crashing away a solid result in Detroit the weekend before, the seventh was a welcomed sight for the veteran. Wilson’s had a quietly solid season and will pass Dylan Ferrandis this weekend to take over eighth place in the championship standings. If he’s able to keep building late in the season like this, he may be knocking on the door for some top five results before long. –Brauer

Recovery On The Fly

Amazing we’ve reached 12 rounds of racing this year and Cooper Webb, the defending champion, has yet to even win a single race. He was struggling early in the year but moved back into contender status at mid-season. Then he got jacked up in a crash two weeks ago in Detroit, and while he was able to race Indy, he was not 100 percent. We talked to Webb yesterday and he did say his bruised up arm/shoulder is still a problem on big impacts. Now he’s left to try to get back up front and try to get that elusive win while also not quite feeling 100 percent physically. This is a tough task, but you know Webb is not happy about being winless. – Jason Weigandt

Recovery on the Fly 2

With so many contenders crashing lately—Webb, Chase Sexton, Jason Anderson and Dylan Ferrandis all went down in Detroit—things were trending in the right direction for Malcolm Stewart, who stayed consistent and moved to second in points. Then last week it was his turn to hit the dirt with an endo. He recovered and finished the race, but now he’s going to have to rebuild momentum like the rest of the group. Is he right back up front in Seattle? --Jason Weigandt

We’re sizing up the track this afternoon here in Seattle. There are some big combos available out there, but will they hold up for the main? The 450 riders were thinking about a 4-3-3 out of a 180 (double then over a table) and they started pulling it halfway through the free practice. It looked fast and smooth, but if that 180 gets chewed up getting that quad is not going to easy. We’ll see what lines hold up when it’s time to pay points tonight. --Weigandt