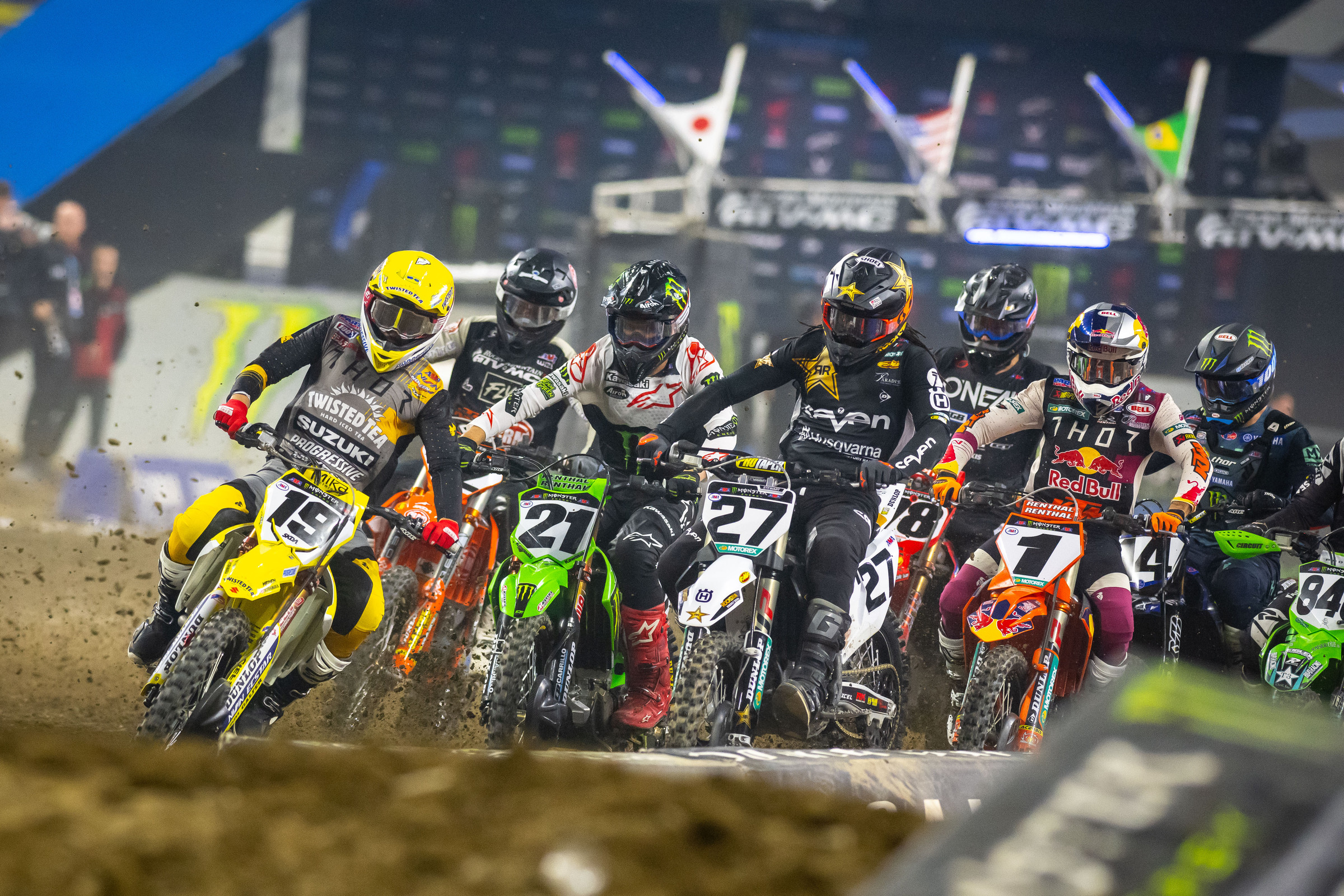 The tenth round of the 2022 Monster Energy AMA Supercross Championship has come and gone as the Detroit Supercross is now behind us. There were many talking points from a wild night of racing at Ford Field on Saturday night, and as such, we fired off questions to long-time professional racer Jason Thomas to get his thoughts on it all.

Why did this track take so many riders down?

I don’t think it was necessarily one root cause. I think it was just one of those nights where things go awry. This 450 championship has been relatively injury free when comparing it historically to prior years. Most of the factory elite are still out there each week. That’s not always the case. On Saturday, though, the averages seemed to catch up and in a big way. Four factory riders exited the race in spectacular fashion but all in different ways. To try to link them together by one common denominator would be a reach.

What's your take on Cooper Webb mis-timing a rhythm and taking Chase Sexton down with him?

I think he just made a mistake. With rhythm sections at every corner, this type of thing happens, even to the best of the best. In the heat of the moment, riders can have a lapse of concentration. He exited the corner as if he wanted to triple but keep in mind, he hadn’t tripled all day and in that scenario, he is very unlikely to attempt to try it for the first time.

I am expecting a few others to opine that he was indeed going for a triple here. The reasons I would immediately disregard that take are multi-pronged. First, he hadn’t attempted it all day. To think he is going to somehow decide to try that for the first time while side by side with both Clason and Sexton is silly. Second, he didn’t really get a great drive from the corner in the way he would if he was indeed looking to go three. Third, he didn’t “sit and pop” like he would in the first attempt for a jump like that. Riders always want to give themselves a little more height in their first attempt, adding room for a mistake. As they get more comfy, they would want to up the speed and lower the trajectory. His lack of “pop” off the face is another indicator that he wasn’t in the “I’m going to try this” mode. He made a mental error, confused the next section, and paid a heavy price.

Related: Triples out of bowl turns are pretty common, why was this one hard?

Triples out of corners are usually in a 3’x5’x3’ variety. The smaller landing is the key here as it lessens the penalty for a mistake and also means you need less height at the landing site. The jumps in this rhythm section were similarly built (all 5’), upping the ante on precision. It also explains why there were huge crashes in 250 group B qualifying practice, followed by a reshaping of one of the jumps. Having jumps of similar size can expand the creativity possibilities but mistakes are much more costly.

Eli Tomac had caught and passed Jason Anderson for the lead, plus he had already extended his points lead in Daytona. Was Anderson pushing extra hard to go get him?

I think he was probably on the limit, yes, but Anderson has been mistake prone this season. Anderson has crashed several times. He has found a way to overcome that adversity in almost every circumstance, but I really did feel like a harsher outcome was coming if he kept the volatility in his riding. It seems like his riding is at an all time high but to achieve that level, he is also forced to accept a higher risk tolerance. His crashes at Oakland (practice), Glendale, Anaheim 3 (practice), and Arlington (race one), coupled with risky incidents with Barcia at A1, Roczen at A2, and Mookie at Daytona were all adding up. I am a firm believer that if you continue to tempt fate, you will eventually get caught. None of this means he wasn’t on the best form maybe of his career, it simply means he was on or over the line one too many times.

Can you explain Stilez Robertson having the endurance to podium Daytona but drop back everywhere else make any sense?

The whoops at Detroit were the real deciding factor for Stilez. Early on, he decided to jump through the whoops and stuck to it. Unfortunately, it was way too slow to be effective. At many rounds, jumping is a nice alternative when the whoops get dicey. At other rounds, it just never develops into a viable line compared to blitzing. Stilez likely felt that blitzing was going to lead to a crash and made a hard decision. I’ve been there and know the feeling well. Unfortunately, his result suffered accordingly. He was passed there repeatedly and consistently.

Career bests for multiple riders like Cade Clason with a top ten. Yes, some riders crashed out. How do you perceive these results?

Did the crashes effect the results and push privateers forward? Of course. Should they be sheepish or apologetic about it? Absolutely not. There will be plenty of nights where things are very difficult. The elite all do well and some of those guys may end up actually watching the main event from the stands. Riders can only race who remains in the race. Riders like Vince Friese, Clason, Justin Starling, or anyone else that had a career best night should just smile and take it. The mandatory factor of finishing well is to actually finish. For all the nights where things don’t go well, soak up the nights that go your way.