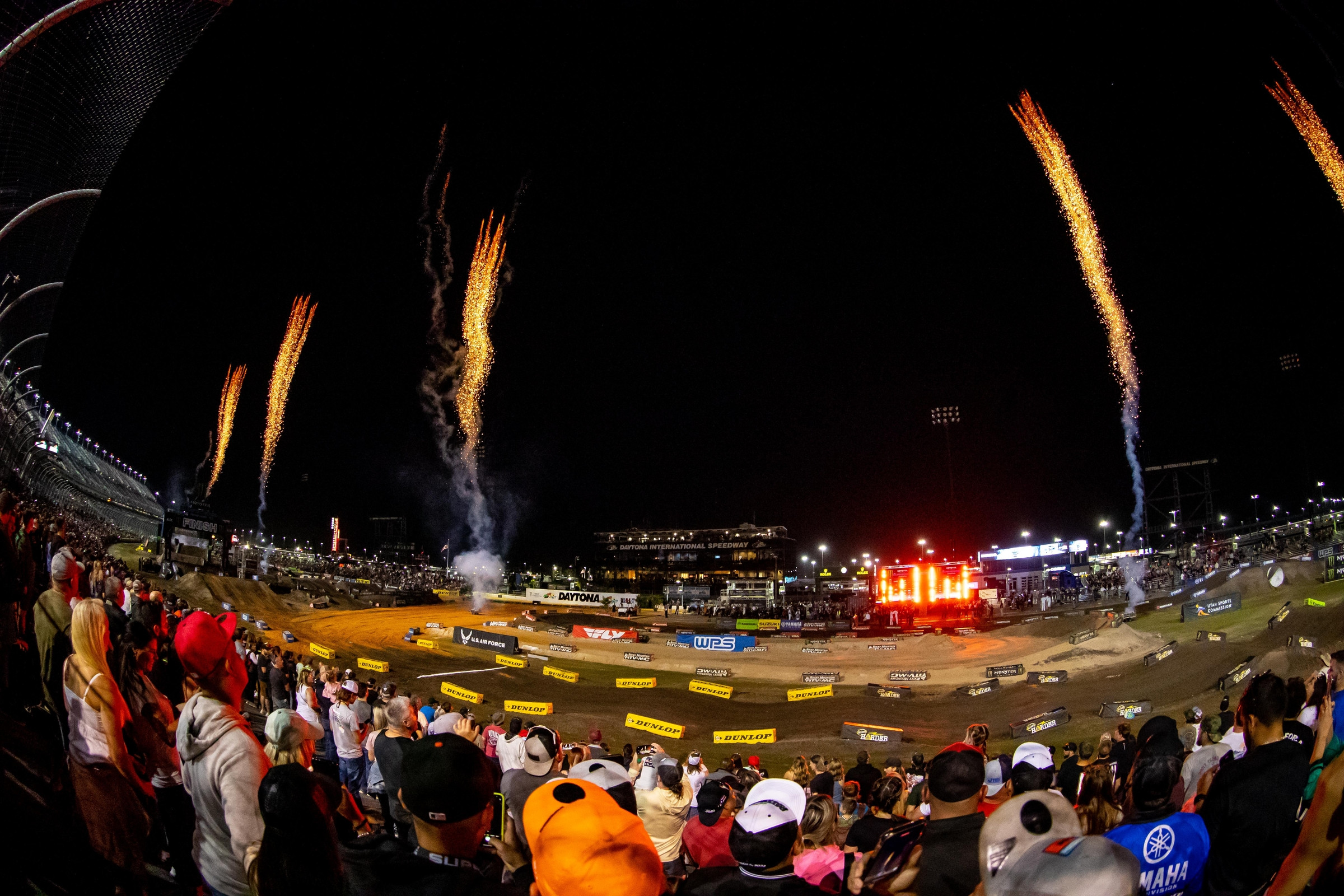 Daytona! When the riders hit the ten-minute mark of the 450SX main event, we were halfway through the 2022 Monster Energy AMA Supercross Championship. Daytona’s a unique, one-off event for the riders and teams with lots to talk about. Let’s get into it!

I did not go to Daytona—you can listen to any of my podcasts for reasons why I usually skip Daytona if I can. Look, if it was the third race of the year, I’d be going no matter what—reasons be dammed—but with it usually falling at the halfway mark of the series and the obstacles I see in going to it, the race makes it pretty easy for me to skip.

I heard from a few people the crowd was amazing, which is great to see, and that is a factor in whether a race stays on the calendar or not. I’m just asking the question that maybe it’s time to move on from Daytona. There’s no race that’s changed as much from what it started as to where it is now, as Daytona has. The patch of grass and the limitations that Ricky Carmichael has to design a track on is smaller than ever, and it’s tough to make a track that’s fun to race and watch. Lots of shadows out there as well, which can catch a rider off guard and truthfully, many Daytona races don’t’ have much going on out there. It’s follow-the-leader, the outside turns are too far out, and the riders are worried about just trying to stay upright as opposed to racing.

Now late in the 450SX main, this 2022 edition got good and we saw some drama and excitement so there is that. But it was a snoozer for 90% of the time on TV and it’s been a snoozer for most of the years. We’ve seen a speedway track that has lots of room last year in Atlanta and we’re going back there this year. That speedway race works and works way better than Daytona in my opinion.

Look, I’m about loving the history of this sport more than just about anyone. I love it and I’ll bench race about the olden days with just about anyone around. I just think that, although we love the nostalgia, it might be time to look at what Daytona actually is now and move on.

Ok, so I didn’t go to the race as I said, so I can’t do a blow by blow of the results like I usually do because, well, I didn’t see over half the field like at a regular race so here are some thoughts from the couch.

Eli Tomac won his record breaking sixth Daytona SX in style with a gritty, dig deep-type of performance. He’s been way more dominant and way flashier in other wins, but this one, man this win was hard-earned. He never looked as great as he usually does, his outright speed wasn’t really there in practice, and he had to grind it out against Cooper Webb late in the main event. Now, a lapped Shane McElrath helped Tomac get by Webb, but in my opinion, I think he gets it done without the help. He was closing in on Webb and I just think he would’ve gotten it done. You can argue in the comments below if you want and I’ll accept it.

Tomac had to find something extra to win this race and in a way, that’s more sensational than his wins in the past. This one was reaching deep down into those reserves to make the move on a two-time 450SX champion. Damn impressive!

Cooper Webb has certainly righted the ship after his 8-8-8 performances from earlier this year and thanks to Mookie’s, errrr, “issues,” he moved into third in the points as well. He’s made a change with his off-track trainer/coach, Michael Byrne, also, and not sure what the new program is moving forward but he’s gotten things going again. Now, as good as the last two podiums have been, I’d argue the 2021 Webb does not get caught for the lead late in Daytona. I don’t think 2021 Webb would’ve gotten dropped by a few guys in Minneapolis a couple of weeks ago either. So, there’s, to me anyway, some positives and negatives to take from Webb in recent weeks. Still, a second at Daytona is what he got and that makes it five straight years Webb has made the podium at Daytona but hasn’t won. Is there another rider, outside of Aaron Plessinger, who would love a win down at the speedway like Webb?

So yeah, here’s what I wrote about Jason Anderson and Stewart last week in this very column:

“And also, as well, he’s (Jason Anderson) got Malcolm Stewart pissed at him now. So, if Mookie has a chance to tee him up down the road, he might not hesitate to make it happen.”

And yeah, that chance came this weekend. In the second turn, Anderson hit Tomac and that sent Tomac into Stewart. There was a whole ball up between them and Mookie definitely saw the green bike and decided revenge was now needed. So, in the left-hand sand turn, that’s what happened. Anderson took a funky line that sent him to the middle of the turn, Stewart stayed tight and basically sent his Husky into the side of Anderson’s Kawasaki, and boom, just like that, both of their races were ruined.

Here’s the thing though, Anderson’s move wasn’t that bad! Mookie turned down, which considering you’re in the second turn and there are twenty guys two tenths of a second behind you, that is a curious move. He had room to rail the berm and follow Webb, and in my eyes, he’s got to be smarter than that. But to him, he had control of the track at that point and yeah, that’s what we guess. A borderline racing incident but when you add it to the knock-down pass Anderson did to Stewart last week, we get the takeout we all saw.

Both guys got penalties for doing Mach 4 beside the track when they were knocked off at different points and they lost spots there, plus the ones they could’ve gotten if they had just stayed away from extracting frontier justice. Here’s the thing though, they both could’ve made the podium or even won the damn race. Mookie had won his heat, Anderson had been fastest qualifier and both riders looked amazing. Webb and Tomac’s race definitely would’ve been a lot harder had those two guys decided to focus on racing.

Anderson’s left some SERIOUS points on the ground this year. As I wrote last week, these things can come back to bite you and they did this week. Generally, SX champions like Tomac, Webb, Ryan Dungey, Ryan Villopoto, Jeremy McGrath, or Carmichael just don’t get involved in knocking guys down. Partly because they’re so fast they don’t have to, but also partly because they don’t want anyone to mess up their chances to get points.

Chase Sexton got a quiet third on the night and I’m sure he was relieved that he managed to stay off the ground and out of any issues to get a podium. Daytona rewards riders who are creative, ballsy, have great technical skill on a bike, and are in shape. I wouldn’t be surprised to see Sexton win this race at some point—he’s got all you need. Honestly the broadcast didn’t even show him after Tomac got by him and so, yeah, good ride but…shrugs.

Look at that, Dylan Ferrandis got a good start and finished in the top five! He was in a battle with Justin Barcia for most of the main and made the pass late to end the night on a good note. Good track for Dylan for sure, and he got his second-best result of the season.

THE JETT was great in Daytona, in fact he was amazing and he made the race pretty boring, to be honest. Two wins in three races and in the one he didn’t win, he won one out three of the Triple Crown mains and was balls fast in the other two. Got it? Lawrence just has to not beat himself and he’ll win the majority of these races on this coast.

Cameron McAdoo sounded like he was in some serious pain from a heat race knee injury. He was a bit slow to get going in the main as well, but he gamed it out enough to end up on the podium. What a battle he was in there with Pierce Brown and RJ Hampshire for a number of laps.

One of the weirder stats is that Stilez Robertson is from Bakersfield, CA, and has two career 250SX podiums and they’ve both been at Daytona and both have been seconds. Robertson got a late start riding this year due to injury and although his starts have been on point, he’s generally been dropping back after said good starts. Not this week though, and his success at this race might be a case for Daytona and how simple it is. Get a good start and you’re good because of the lack of options for passing. Anyhoo, Robertson is third in points despite a -9 position deficit in his three races to start the series.

Club MX riders Enzo Lopes and our buddy Phil Nicoletti were running third and fourth early in the 250SX main and Lopes, after passing his future brother-in-law, was third for five laps before getting gobbled up by that Brown, McAdoo, Hampshire freight train. Both Nicoletti and Lopes had some clutch issues on their Yamaha’s that held them back in the race so I’m sure the team will try to fix those for next week. It doesn’t take away the start that both of them have had and the impressive riding. Lopes is two points out of third in the series! Something cool is brewing here for the riders and the team.

Some other random thoughts:

Kyle Chisholm got 13th and yet again beat all the other real privateers out there. He’s a remarkable consistent ball of Chiz out there every week and guess what? He got a fill-in ride with the Monster Energy/Star Yamaha Racing guys for the 250SX class! He did ride 250s not that long ago so I’m not worried about that, but it should be interesting to see how he does against the kids. Attn: Kids in 250SX east, I know you weren’t even born when Chiz began chizzing on everyone but better buckle up cause he’s gonna get you.

Alex Martin hit the over/under bridge when he got cross-rutted jumping a double coming into it. More proof that he’s not an actual Troll because if he was, he’d have no issues getting under the bridge.

Is Ken Roczen back? I mean, he was better, but he’s usually VERY good at Daytona. So yeah, he was fifth, ended up ninth but got two spots back because of penalties so, yeah, still don’t know what’s going on.

UPDATE- Roczen’s out for a while, I still don’t know what’s going on.

Garrett Marchbanks was close to the top ten in the 450SX class, he had to stop for some goggles and that hurt him, but otherwise, the 250SX rider showed some good speed out there on the big bike. I’m sure the team just slapped on A Mart’s settings and were close right?

If Jordon Smith and RJ Hampshire just raced head-to-head, who would crash more? The mind boggles with this question but I’d like to see it! Smith had a good race as he creeped close to a top five. RJ was fast as shit but, wait for it, crashed.

Thanks for reading OBS from Daytona, it’s been a good time! Email me at matthes@racerxonline.com if you want to chat about this race or anything else.