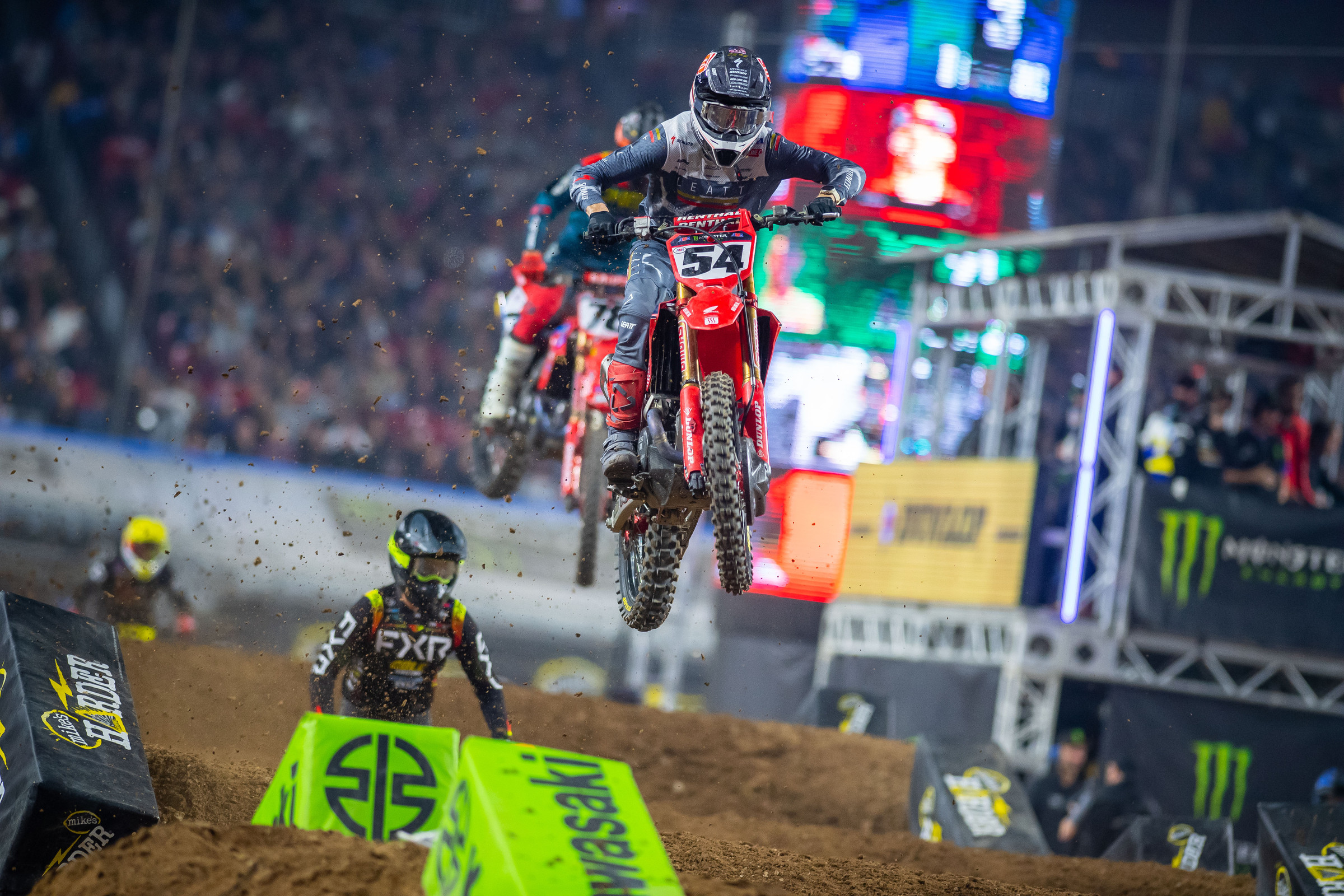 After a ninth in the final 250SX East Region standings, Mitchell Oldenburg thought his supercross career was over following the 2021 season. He even started looking into regular jobs to start supporting his family. Then Tony Alessi gave him a call. Alessi, the SmarTop/Bullfrog Spas/MotoConcepts Honda Team Manager, felt that “Freckle” still had something left in the tank, and his team could help him push back toward the podium. Freckle took the call and took the offer, and even navigated moving back to California while he and his wife also stood on standby for the birth of their second child. It was a hectic off-season but it was worth it. MCR put Oldenburg on a 450 for the West Coast races to get some real race prep for the 250SX East series. He’s been rock solid, making the main in every event he has shown up for (he missed round two due to COVID-19) and finishing between 13th and 19th at each race. The goal was to stay healthy and get in gate drops to be ready to contend in 250 East. Remember, he’ll be on the same bike as Vince Friese, a machine that has proven very effective so far this year.

Steve Matthes caught up to Oldenburg after the Anaheim 3 round.

Racer X: Freckle! Don’t feel bad about crashing. There were 44 guys in the two main events and probably 35 of them went down at some point.
Mitchell Oldenburg: Yeah and I’m lucky mine was just a tip over. It’s hard to focus on tonight when next weekend is what really counts.

Justin Brayton was talking you up just a few minutes ago.
Yeah, I think the 450 racing has helped a lot, it’s made me much stronger and smarter. Then being around JB [Brayton] and Vince, picking up on their race craft and stuff, it’s been huge for me. At San Diego it clicked. The team hired me for the 250, so from there I was like “Put in the laps and if it’s there, it’s there, but if not, just be safe and we’ll go back to work on Monday.” Yeah. I feel like I got the weight off my shoulders right now. It’s time to put in the work and start getting some results.

Do you feel like riding the 250 during the week, that helps or hurts for the Saturday races on the 450?
Um, I don’t know. I’ve been coming to the Saturday races with the attitude of if it’s there we will go for it but if it’s not, just put it in the main event and ride around. Everything has gone according to plan so far. The plan was to make every main event, stay out of the LCQs and go into 250 East healthy. Those boxes have been checked. Start looking forward to the next goals. Everyone keeps saying stick to the plan and it will work out. Man, it’s been fun and I’ve been enjoying myself.

Six weeks, six tough tracks. You didn’t race one race, but you’ve been here for five of them. These tracks have been gnarly.
It’s been really gnarly, and I know I’m not the only guy with the whoops…they were in my head all day when I saw there was 14 of them….

They were tough! I saw you on one lap, you were being so careful, going into them so slow…you were just like, “I don’t want to crash!”
Exactly! I would hate to do something stupid for a 14th place. Yeah, 14th place in the 450 main is great but that’s not the focus. Let’s just be safe and bring it home.

Overall, this has been a successful stint racing 450 west. I don’t think there’s any other way to frame it.
Yeah, 100 percent. No big crashes, no really sketchy moments, I feel like we executed perfectly. That was always the worry from the beginning of this conversation with the team about racing the 450. I don’t want to come into the 250 series injured. I’ve got to be at my best to win, and that’s what I want to do. Now that we’re done with the 450, it’s go time on the 250. I’m ready to go. I wish Minneapolis was tomorrow.