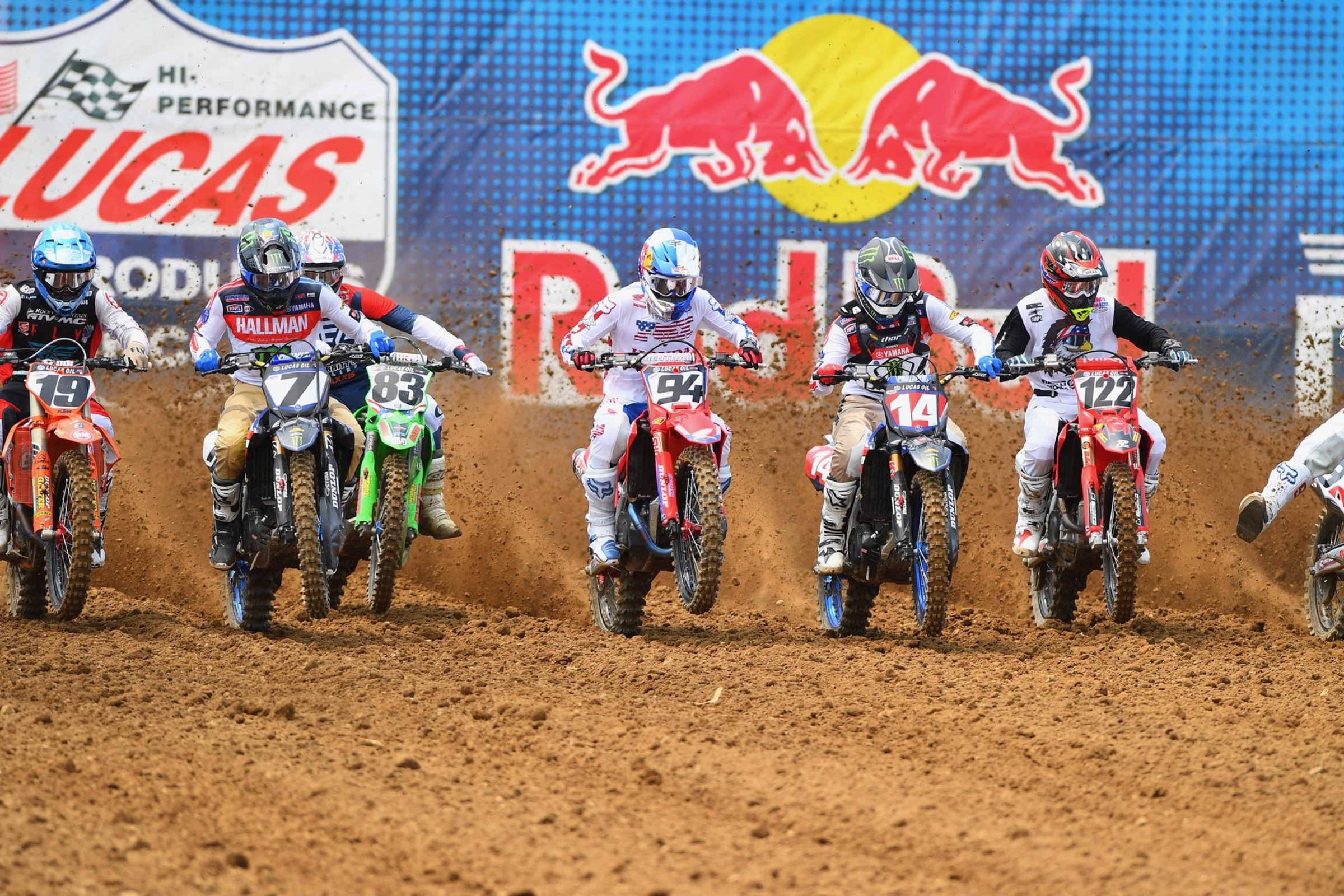 There’s just nothing quite like spending a Fourth of July weekend at America’s home for motocross. RedBud in Buchanan, Michigan, hosted the fourth round of the 2021 Lucas Oil Pro Motocross Championship on Saturday and a lively crowd was provided a top-notch race. Both classes saw close battles all the way to the flag, with as many as five or six riders often looking like they may end up battling for the lead.

In the 450 class, the title fight between Dylan Ferrandis and Ken Roczen was heating up throughout the day. With just three points between them after Ferrandis’ win at High Point, it was up to Roczen to respond and try to take the points lead back. In the first moto, Roczen looked like he was doing just that after he passed Aaron Plessinger for the lead of the race around the halfway point and looked to take off out front in the late stages. That strategy was all but thwarted by not only Plessinger keeping Roczen honest, but Ferrandis also coming from behind Eli Tomac, Cooper Webb, and Adam Cianciarulo to put himself in a three rider battle for the lead late.

Ferrandis then methodically picked off his teammate Plessinger for second before hunting down Roczen right near the end to nab the win away from the German. It was an unmistakable display of where Ferrandis’ current level is at. To not only run down Roczen and get him late, but to pass the riders he did to even get there, it certainly raised some eyebrows.

But the second moto only provided more fireworks as Eli Tomac stuck his nose into the mix for the second round in a row. Tomac’s first moto was solid, much more so than his first five motos of the year, but moto two saw yet another rare good start for Tomac turn into a well-managed effort from the front. He held off the advances of Plessinger, Roczen, and eventually Ferrandis to claim his second consecutive second moto victory. But Ferrandis was again the big winner for the third time in four races to start the year as he put up 1-2 scores for the overall victory at RedBud.

“I just give everything I have,” said Ferrandis. “Right now, I’m really tired. I left everything on the track. I think Eli is the same, also. He never gets passed on the last lap. Maybe I’m like this, I don’t know. When there is a guy in front of me, I try to pass him, it’s as simple as that.”

Ferrandis’ day wasn’t without a hiccup though as both he and Roczen were penalized when they jumped on a red cross flag. Roczen took the larger brunt of the penalty as he jumped the whole tabletop where Dean Wilson had crashed, and the AMA slapped Roczen with a two-point penalty. Ferrandis, who only slightly jumped instead of the clearing the whole thing, was penalized one point for the infraction, though it was not enough to stop him from winning the overall.

Second on the day went to Eli Tomac who, as mentioned, claimed another moto win in the second moto. Tomac’s first moto was a bit puzzling, as he seemed to have the pace of the riders out front, but was passed and immediately dropped by Dylan Ferrandis who was on another level. Tomac brought home fourth in the first moto but was able to turn it around in moto two. Good starts have certainly been helping Tomac’s case lately as he tries to turn around what has been an otherwise rather disappointing season.

RedBud’s mascot, also known as Aaron Plessinger, was third on the day with 3-3 scores. Plessinger was able to convert two great starts into running up front all day long, something he was not able to do in the second moto at High Point when he also nabbed the holeshot. The partisan crowd was certainly overjoyed to have Plessinger on the podium and the chants rang through the facility as Plessinger talked about his strong day.

“I definitely put myself in some really, really good positions,” said Plessinger. “First moto I kind of pumped up a little. Then I found my grove. Dylan came ripping up from behind us and then gave us the business. Same thing in the second moto, I was battling with Eli and I just couldn’t capitalize on it and get the win. I’m really happy for my riding. Especially after missing all of last year. Hopefully it plays into my favor.”

Fourth was Ken Roczen who had his first real “moment” of the outdoors. While running in third place in 450 moto two, Roczen lost his Honda from underneath him as he swapped after Larocco’s Leap and high-sided into the sandy left-hander. Roczen was uninjured and immediately remounted the bike, but it was a bit twisted up from the fall and Roczen could only nurse it to a sixth-place finish from there.

Christian Craig quietly put together a 5-5 day for fifth overall in one of the more under the radar results of the year. Craig did have a good start in the second moto but would eventually lose the trail of the lead group and settle into sixth. But when Roczen crashed, Craig benefitted and slotted into fifth where he would remain. A solid day for Craig who continues to slowly build into a guy that could play spoiler for the championship hopefuls down the stretch.

With Ferrandis’ third win of the season, he now opens up 11 more points in the championship over Ken Roczen to command a 14 points lead at the conclusion to the first third of the championship.

In the 250 class, the championship battle between Jett Lawrence and Justin Cooper seemed to be heating up as they had now exchanged overall wins and both won motos so far in 2021. After Jalek Swoll surprised the paddock with his first career overall win at High Point, RedBud provided a new opportunity for someone else to add their name to the hat.

Enter RJ Hampshire, who had been leading 250 moto one at High Point when his chain snapped and he was sent back to the hauler with a DNF. Hampshire has been sneakily right off the lead group through three rounds and was keenly eyeing the chance to finally break through.

In the first moto of the day, Hampshire was gifted the lead when Justin Cooper crashed over the finish line jump coming to the end of the first lap. Hampshire then promptly tipped over while leading which allowed Jett Lawrence to the front. Then Hampshire again had another small crash that allowed Hunter Lawrence through to second. All of that didn’t seem to deter Hampshire though as he clawed his way back around Hunter and caught Jett with just two laps to go. Though he got right onto the rear fender of the Honda HRC man, he couldn’t quite get the job done and Jett Lawrence claimed his third moto win of the season.

But Hampshire was ready when the gates dropped again and stalked Justin Cooper for the first half of the second moto before taking advantage of a small mistake to jump into the lead. Hampshire then led all the way up until three laps to go when yet another crash pushed him back to second. Hampshire had been sick leading up to RedBud and the third crash took enough out of him to finally settled him into a pace that was good enough to bring home another second place in the moto. Despite not winning either moto, Hampshire’s score was still plenty to claim the RedBud National in his third career 250 class victory.

“Man, honestly I wasn’t sure at all,” said Hampshire of his expectations battling illness. “I had two good days—Monday and Tuesday on the bike—and then Wednesday was when it hit me. It hit me hard on Wednesday. I was just like, man this is going to be a tough one. Dr. G. [Dr. H. Rey Gubernick] saved me. No joke made me feel 70 percent better.”

Justin Cooper was able to hold on and win the second 250 class moto for the second week in a row and with is pulled a bit closer to Jett Lawrence in the points standings. Cooper has been building up to a level of speed that’s good enough to win motos even when he doesn’t get his patented good starts. Now the championship scenario is tightening up and Cooper will looked to keep chipping away at Jett’s lead.

Third on the day was the aforementioned Jett Lawrence who had a roller coaster of a second moto. After getting an awful start outside of the top 20, Lawrence was working his way forward when he collided with another rider in the off camber and essentially went to the back of the field on the second lap. That meant for 30 minutes, Lawrence had to salvage as many points as possible, and he did a masterful job of doing so. With a few minutes left to go, Lawrence worked his way into the top 10 and incredibly found his way into sixth as the flag waved. His 1-6 scores earned him third overall and only three points lost on the day to Cooper.

“The bike handles good but you can always improve it,” said Lawrence on improving his bike setup between motos. “I’m always trying to find more improvement in my suspension, bike, myself. We’re always improving in our bike, always making tinkers to the suspension and the bike.”

Jett’s older brother Hunter was fourth on the day with 3-4 scores and he seemed very happy that he finally was able to get on the podium in the first moto and yell “RedBud!” to the crowd. But his overall riding seemed to be just a tick off the top throughout the day, which ultimately left him off the podium. Still though, he still remains third in the championship and is somewhat the only rider still within a close range to his brother and Justin Cooper ahead of him in the standings.

Maybe the talk of the two days leading up to the event was that of Jeremy Martin’s return to the starting gate. The two-time champion is dealing with broken fingers, a fractured scaphoid, and a nagging shoulder issue that seemingly was going to sideline him for the summer after his championship hopes were dashed. But the Monster Energy/Star Racing Yamaha team announced he would be racing RedBud on Thursday and much to the surprise of many in the paddock. He made good on that decision though as he put up 5-3 scores for an odd fifth place overall. Martin was unquestionably gritting through the pain, but he was all smiles with his third place in the second moto as he’s just looking to do some damage the rest of the season.

That’s all from RedBud this weekend, as he tip into the second third of the championship next weekend at Southwick, Massachusetts. We look forward to seeing you there!