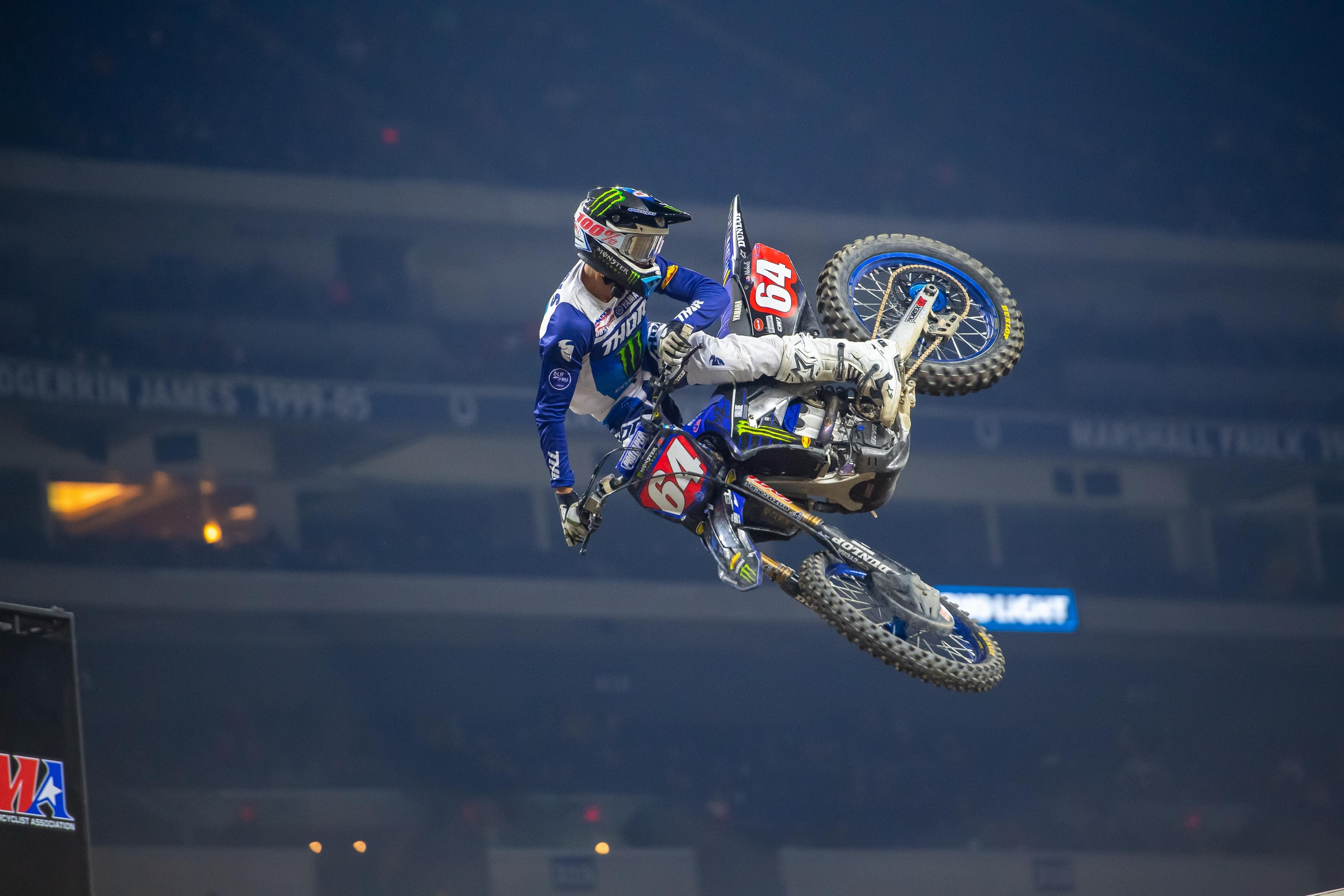 The rules for pointing out of the 250SX Class of Monster Energy AMA Supercross have been modified here and there over the last few years, and unless you’ve been following that closely, it can be a little confusing when it comes to who’s still allowed to compete in the class, and who’s burned their eligibility. Good thing for you, we take a look at the potential crop of 250SX graduates every year, and explain who will, and who won’t, be making the jump to the 450SX ranks in 2022.

The most important rule to remember for 250SX eligibility is the following:

The main take away here is, no matter what, even if you cross the points threshold in every single season you compete, you’ve got at least four years in the class. So, right off the bat that eliminates Hunter Lawrence, Jett Lawrence, Jo Shimoda, Garrett Marchbanks, and of course, any rookies, from any danger of being advanced to the 450SX class. There are still plenty of veterans, however. Let’s see where they stand.

With the above rule in mind, you’d think Nichols wouldn’t be in any danger of being promoted, seeing as how at the conclusion of 2021 he’ll have only burned three years, leaving him an additional season. However, it appears the following rule comes into play in this situation.

A rider that wins a 250SX Championship will be eligible to participate in the 250SX class for a maximum of four years total.

If a rider wins the 250SX Championship in their fourth season but has not reached the max point threshold in four seasons, that rider will be eligible to compete in the 250SX class the following season only.

If a rider wins the 250SX Championship in their fourth season but has reached the max point threshold in four seasons, that rider will be ineligible for the 250SX class.

Since 2021 is Nichols’ seventh season in 250SX, it appeared he would have to move up in 2022 if he wins the title. After all, the first rule here says maximum of four years total. That's what we originally posted in this story. We even sent a message to the AMA for clarification and they said we were correct.

However! On a second look, the AMA has confirmed that the rule actually means four years over the points threshold.The AMA's Mike Pelletier confirmed to us that riders are only not allowed to defend a title if they have crossed the points threshold four times. Nichols has not done so, so he will be allowed to defend his title in 2022 if he wins the championship this year. This same scenario will apply to Christian Craig.

The only time a rider can't defend is if he passed the points threshold four times and wins the title. That could have applied to Shane McElrath if he had won the title last year.

Craig is definitely a veteran of the 250SX Class, but he’s had a lot of injuries and weird things that have hampered his title chases. He’s already exceeded the threshold this year, so he’s got at least two more years of eligibility.

Update: Like Nichols, if Craig wins the title he gets one year to defend. See above.

This is Mosiman’s fourth year as a 250SX rider and he’s gone over the limit twice. Right now, he’s got 97 points, so if he scores 38 points or more in the next two rounds, which he could easily do, he’ll knock a year off his 250SX lifespan.

Oldenburg is a talented rider, so it’s weird to think he’s never gone over the limit. Yet, here we are, and considering he’s injured right now, he won’t do it this year either.

Hampshire went over the limit for the first time in 2019 but hasn’t done it since. Thanks to an injury suffered early this season, he won’t do it in 2021, either.

This season is Forkner’s fifth and was likely to be his last in the 250SX Class. He was either going to get advanced via a championship, or burn his final year trying. Since he broke his collarbone early on, however, he’ll reload for what is probably, maybe, likely to be, who knows, his last year in the class in 2022.

Even if Cooper wins the title this year, and it’s looking like he will, he won’t be forced into the 450SX Class. If a rider wins a title in his fourth year, like Cooper is going to do in 2021, he gets another year to defend the title, unless he’s exceeded the threshold for four years, which Cooper hasn’t. Good luck to anyone trying to beat him in 2022!

McAdoo went over the line in 2019, and he’s already gone over it, amongst other things, this season too. Unless he wins a title in 2022, which will be his sixth season aboard a 250, he’s got two more years of eligibility left.

If arenacross wins and championships counted in supercross, Peters would have been given the boot from the 250SX Class eons ago.

If you look up veteran in the dictionary you won’t find a picture of A-Mart, but you should. The dude’s been in the 250SX Class for a long time, and he’s been pretty competitive too. Yet somehow, he’s only gone over the line once, and since he got injured this year, he won’t be doing it again in 2021. Barring a title, there’s at least three years left in the class for everyone’s favorite Troll.

The following rule often affects who gets promoted and who doesn’t, but since no current 250SX riders have won a title in the past, it doesn’t apply to 2021.