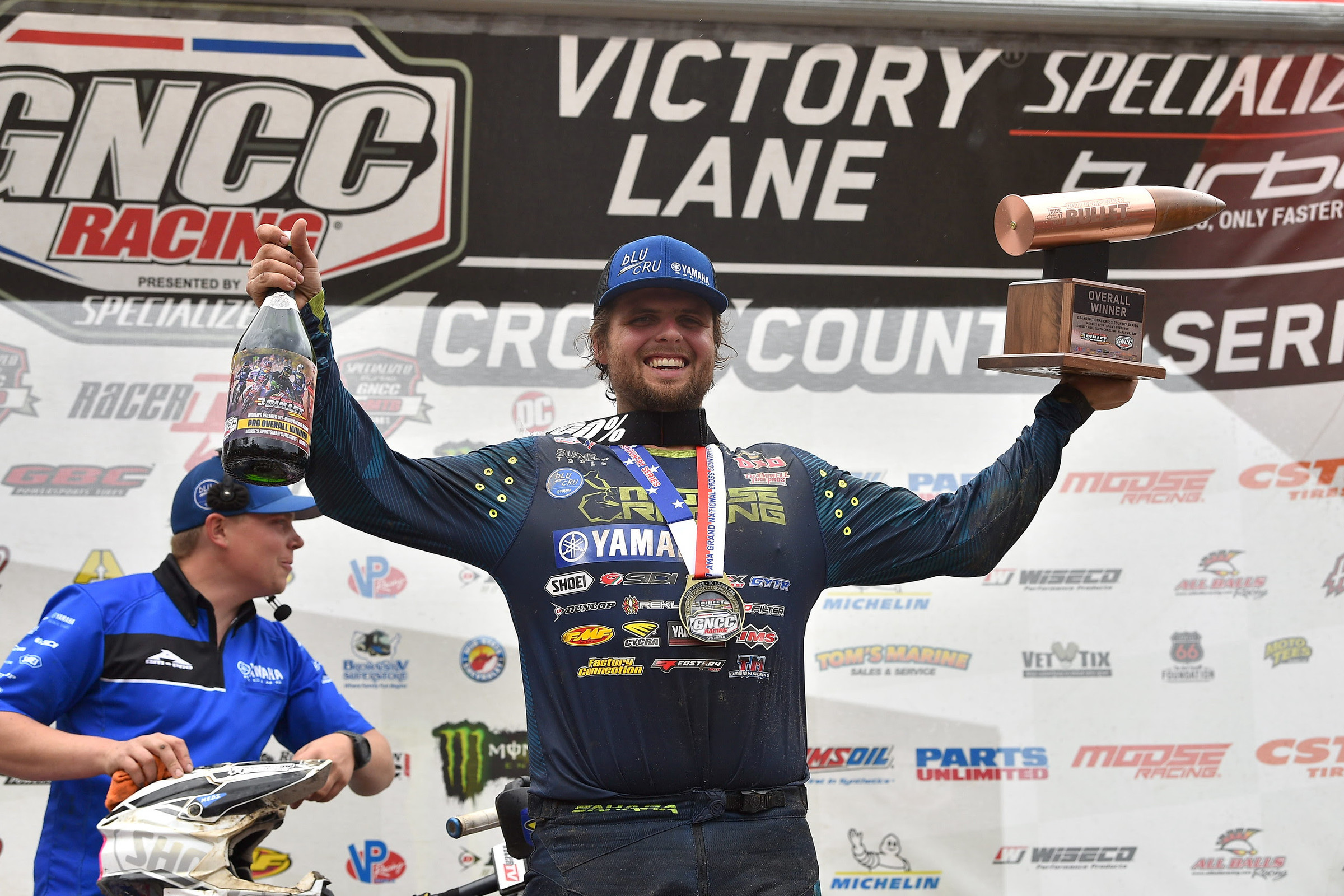 Steward Baylor’s march back into the GNCC title contention continues, as the AmPro Yamaha rider won his second-straight race in the series after missing round one with injury, and suffering clutch problems at round two. This one wasn’t easy though as Stu Baylor and Josh Strang battled the whole time, all the way down to the last lap. The pair would begin to pull away from the rest of the pack, while swapping the lead position multiple times. Strang would lead the way as the white flag came out, but as they headed towards the finish line it was Stu Baylor coming through to earn his second-straight win of the year. Strang would finish second just three seconds behind Stu Baylor.

“That was intense,” Stu Baylor said on the podium after the race. “I could tell that last lap, both Strang and I, we were both down on power. You could just hear it, and there were sections where you’d get into the deep stuff and you know you have to give it hell. It’s like, you know your bike could blow up at any time, but it was battle to the finish. Man, I missed some marks coming into the finish. I could feel Strang behind me, he was so close, and he missed a couple of marks that we made all day. He tried to get on the inside, I think if he had railed the outside it would have been a different story. But racing like this, man, I’m just waiting for this guy to start getting old!

My head is looking towards the championship. This is where we need to be. Not sure about Ben and Grant but they were further back, so this was a good day for points. I think we made up 10 or 12 points today, so we’re on the right foot now.”

Strang earned his third overall podium finish of the season.

“Yeah I was so close,” Strang said on the podium after the race. “Actually pretty bummed about it. I felt pretty good about it, but on the last lap Stew really put the hammer down. I don’t think either of us had much left, I know I didn’t have much left. It was a good race, I got the holeshot and had a good race. It was getting hot, but luckily the rain came down and that cooled it off a little bit. I like this place, I wish the laps were a little longer because we did a lot today. Felt like a long race. Feels good to get back on the box after the last race where we had an incident there.”

Magna1 Motorsports/Husqvarna’s Jordan Ashburn made his way onto the podium with a third in the XC1 Open Pro class. Ashburn would get off to a good start coming through in the fourth place position and would make the pass for a podium finish on the fourth lap of racing. Ashburn continued to push, but he would be unable to catch the lead pair.

“It was a good day, I just tried to ride my own race and here we are,” said Ashburn. “The track was really brutal. It was a new team and a new year for me, everyone is working together and the bike is really good. I want to just keep putting it on the podium. Having a lot of fun right now.”

Making his way towards the front after a seventh place start to the day was FMF/KTM Factory Racing’s Benjamin Kelley. Kelley would hold onto third for a couple of laps, but would ultimately lose the position to Ashburn, and remain fourth until the checkered flag was waving.

“It was a rough day,” said Kelley in a post-race press release. “I kind of got caught in the ruts in the first couple corners and dropped back and then I got hung up for about 10 seconds in the mud hole around mile 1 and lost the pack. I was able to go from last to third on the first lap and then after that, I just wasn’t feeling it. I was so tired and it was all I could do to just make the laps. It’s a super frustrating day but I did the best I could with how I felt. We’ve got three weeks now so we’ll regroup and try to come back strong for the next round.”

KLM Milwaukee GasGas’ Grant Baylor rounded out the top five in XC1. Grant Baylor worked his way through the pack after coming through timing and scoring on lap one in eighth place. FMF/KTM Factory Racing’s Josh Toth had a great start to the day as he found himself running third on the opening lap. However, Toth would fall back to sixth at the end of three-hours of racing.

“I was riding pretty good at the beginning and I felt comfortable but I tucked the front and crashed over a downed log, smacking my elbow pretty good,” said Toth in a team statement. “After that, it seemed like every time I tried to get aggressive or push harder the track bit me and I went down, so I was kind of just riding it in. I’m glad to make it out mostly healthy.”

Earning seventh in XC1 was the Rockstar Energy Factory Husqvarna Racing-backed rider Trevor Bollinger. Bollinger would continue to push himself as he started out the race back in ninth place. As the laps wore on, Bollinger found himself making the necessary passes to continue his way to the front of the pack. Bollinger would run out of time to make any more passes, but he has been steadily improving since returning to racing.

“It’s my second race back in a little over a year and a half so I’m still just trying to get my feet wet and build on where we started in Georgia,” Bollinger said. “I started a little slow in the beginning but towards the end I was able to pick some guys off and end up seventh in the class. Not a bad day considering where we were two weeks ago. I’m looking forward to the next one and getting back to where I belong in the front.”

RedBull/MCS Sherco Racing’s Benjamin Herrera worked his way into the eighth place spot as the white flag flew. Herrera worked his way there from a tenth place start in South Carolina. Coastal GasGas Factory Racing’s Ricky Russell had his work cut out for him as he came through the finish line 11th on lap one. Russell would only be able to make his way to ninth on the day. While Factory Beta’s Cory Buttrick rounded out the top 10 in XC1 Open Pro.

In the XC2 250 Pro class it was Coastal GasGas Factory Racing’s Jonathan Girroir taking the class win while also earning third overall in the race. Girroir remains the points leader in the class after four rounds of racing.

Babbitt’s Online/Monster Energy/Kawasaki Team Green’s Lyndon Snodgrass came through to earn second in the XC2 class and fourth overall on the day. Snodgrass sat second for majority of the race, but he would give Girroir a challenge at the halfway point of racing. Snograss would be unable to hold onto the lead and come through the finish line 17 seconds off the leader.

Rockstar Energy Factory Husqvarna Racing’s Craig Delong rounded out the top three in XC2 after he worked his way through the field of racers from a sixth place start to the day. DeLong would hold a steady pace throughout the day, but he was unable to catch the leaders in time to put up a fight for the win.

“It was a tough day,” DeLong said. “The track was physically demanding and then the rain came and it got rutty, muddy and even tougher. I made a good run there in the middle and I got kind of close to the leaders but once the rain came, I kind of struggled with the mud. The bike has been getting better and there’s improvements being made, so that’s a positive. We’ll go back over these next three weeks and try to regroup and come out better.”

Earning her second WXC win of the year was BABS Racing Yamaha/Maxxis/Pro Circuit’s Becca Sheets. Sheets would have a battle on her hands throughout the entire race as AmPro Yamaha’s Rachael Archer was gunning for her third win of the season.

Sheets would hold onto the lead as the checkered flag flew, with Archer finishing second. The pair are currently tied for the points lead after four rounds of racing. Coming through to earn third in the WXC class was Magna1 Motorsports/Husqvarna/Rockstar Energy/Moose Racing’s Tayla Jones.

In the youth race it was Cole Forbes coming through to take the overall and YXC1 Super Mini Sr. class win in South Carolina. Nicholas Defeo and Thor Powell rounded out the top three overall and in the YXC1 class. While Peyton Feather earned the YXC2 Super Mini Jr. class win with Ryan Amancio and Robert Weiss bringing home second and third in the YXC2 class.

The next round of GNCC Racing will take place in Union, South Carolina on April 17-18 for the Tiger Run. This event will be a Specialized Turbo eMTB GNCC National Championship round.