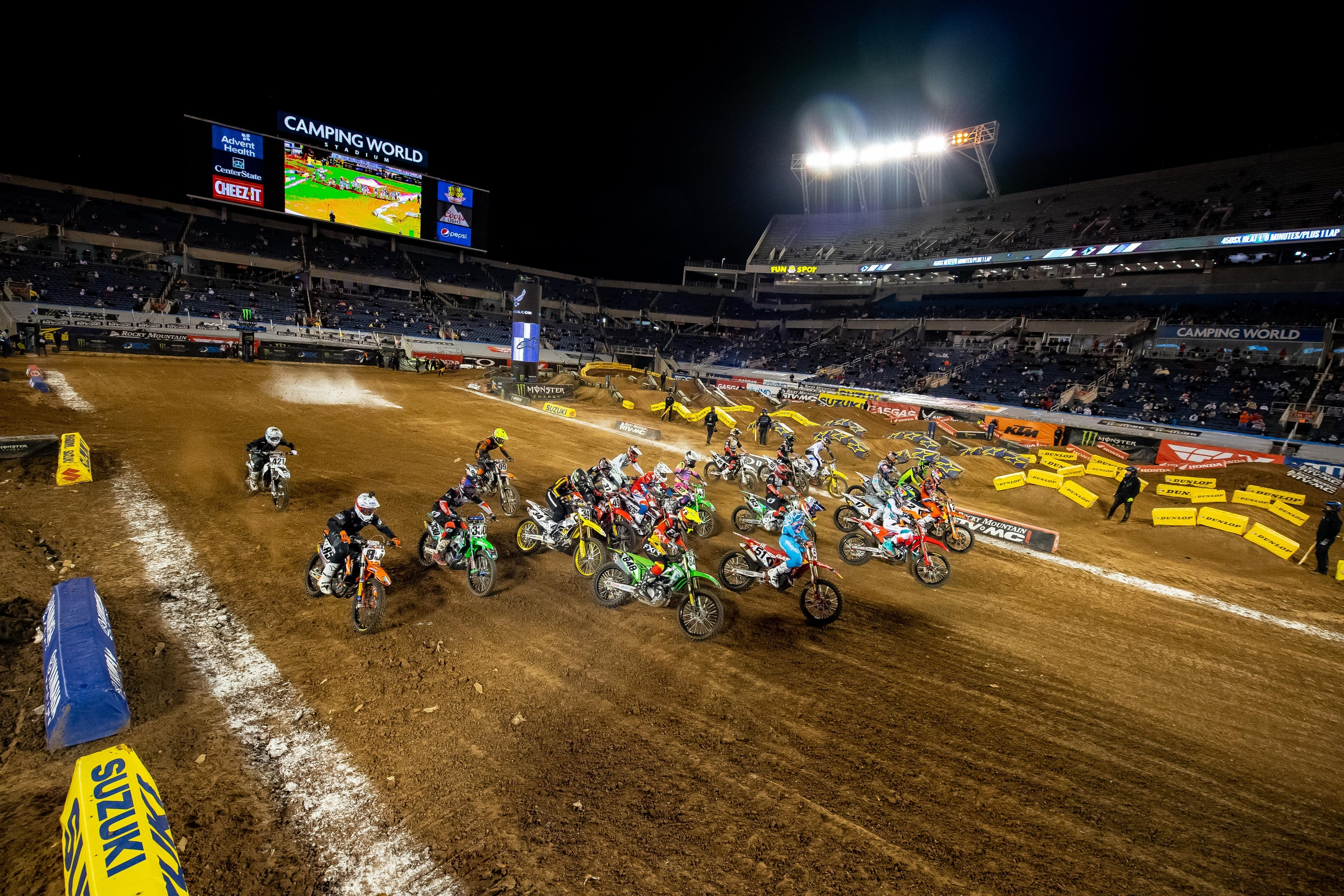 A week after the Orlando 1 Supercross, the 2021 Monster Energy AMA Supercross Championship returned to Camping World Stadium for the eighth round of the 450SX Class and the first round of the 250SX West Region. With several talking points in both classes, we fired off questions to long-time pro Jason Thomas to get his insight on the action at the eighth round.

Track looked extremely dry. What must that have been like?

This is a fairly normal result of dirt sitting inside a stadium for ten days. The sun and rain cycles the dirt harder and harder throughout the week. Had the track been completely torn down and rebuilt, that dirt would have been softer on race day, but that didn’t happen in Orlando. This hardening of the surface is the same dynamic that Anaheim went through for years. Remember, at one point Anaheim held three events over the course of five weeks. Even though they changed the track and moved the dirt, there was still a significant traction difference from the first Anaheim to the third. Dry, slippery tracks are nothing new. They require a bit more patience than I believe many current riders are wanting to exert. Overriding the conditions is a common mistake and usually ends with bent handlebars.

We're seeing some old-schoolers wonder why so many guys jump the whoops today, or struggle in general. This was a short whoop section but what made it so tough?

This set of whoops got very sharp and uneven. As a general rule, I try to avoid criticizing the current crop of racers’ talent or skill set. I don’t really believe that they are incapable of doing the things that the previous generation did, mostly because I have eyeballs and can see what they are capable of. Riders of yesteryear were amazing and so are the current generation. I have a feeling the current riders could laugh at some certain inadequacies of riders from a decade ago as well if they chose to.

Anyone at fault there with the Jeremy Martin/Stilez Robertson incident?

Nah, just an unfortunate racing incident. I was the victim of a similar incident in the 450 main event at St. Louis, 2002. I had a top five start and was just behind Tim Ferry going over a similar double into a rhythm section. Timmy was cut off and unable to double in, forcing me to make a similar maneuver. Timmy checked up, and I checked up. Ryan Clark was just behind us and assumed we would jump normally. By the time he realized that we were not able to double, he had already committed and landed on the back of my YZ250. That catapulted me over the front (my motorcycle stopped immediately but I was still in motion) and I was left with a dislocated left wrist. Watching this incident with Robertson and J-Mart, it was identical in concept. J-Mart got squeezed and checked up over the double but those behind him had room to jump. In the heat of the moment, Robertson jumped when Martin didn't in front of him. I don’t really blame anyone here, just like I didn’t blame Ryan Clark all those years ago. Sometimes things just happen when racing motorcycles and the resulting repercussions can be really tough to swallow.

Agreed. I really felt this was a pivotal race for Eli. Had he been able to win and bring the deficit down, that would lead nicely into Daytona, a great track for him. It could have jump started a reversal in points and momentum. Unfortunately for Roczen and his team, he lost even more points to both Webb and Tomac. Worse, Ken Roczen passed him late in the race, and that’s usually when Tomac has been at his best in years’ past. I am not sure what’s going on with Tomac but he doesn’t seem to have the late race charge that has been his calling card throughout his career. Could it be the result of a big exhale after last year’s title? It’s hard to say just yet but it does appear that the edge in speed and fitness that he’s carried since 2017 may be fading. We saw this less dominant Eli emerge last summer, but I thought we were just seeing the common SX title hangover that most suffer through. After eight average rounds of supercross, though, we are entering a new conversation in regard to our expectations with Tomac.

What went wrong for Adam Cianciarulo?

He just mistimed the whoops, plain and simple. The field today as a whole are so incredibly skilled at blitzing whoops. Many of them use this approach almost exclusively and will only resort to jumping whoops in the direst of scenarios. This Orlando 2 track was exactly that, forcing every rider to consider jumping. A few refused to give in (Jason Anderson, Dylan Ferrandis, Tomac) but AC finally made the move to jumping. The problem is, AC doesn’t have very much experience jumping them because of his proficiency at blitzing. His strength in one area leaves him vulnerable in the other. As a result, he is a little inconsistent with jumping whoops when you compare that to his skills in other areas. Jumping whoops requires patience and precision. It’s easy to rush the process and get into trouble. Jumping whoops feels slow because it requires a much slower entry speed than blitzing. It’s okay, because that speed can be regained through the section, and sometimes you can even go faster than blitzing by the time the section is finished. There are other benefits: jumping is much more consistent, saves energy, and the risk of crashing is much lower (not in this case but undeniable over time). AC jumps whoops only at last resort and his lack of experience jumping was apparent. He rushed the first triple and didn’t get the ideal height to cleanly land the downside, setting up for a quad out. Jumping higher is typically a no-no for going fast but when jumping whoops, it’s a big key to maintaining momentum. It’s very similar to a pump track on a BMX bicycle. With the right height and angles, the momentum does the work for you. **Note: I was not great at blitzing whoops which forced me to become an expert at jumping them. I could write a PhD thesis on jumping whoops after 16 years of it.

Which rookies stood out in 250SX class?

At the rate we are going, whoever is left standing will be a hero. Riders were crashing themselves out of the series left and right, opening opportunity for youngsters much like the 250SX East Region series. Seth Hammaker was incredibly impressive, albeit with a crash-induced sixth in the main event. His speed was much better than I expected and his starts are going to make him a podium threat several times this season. The others like Stilez Robertson, Jarrett Frye, Nate Thrasher, Dilan Schwartz, etc. all had decent openers but didn’t jump off the page like Hammaker did. Daytona will be a much different race and could completely change the perspective for the rookie class but after one round, Hammaker was the story.