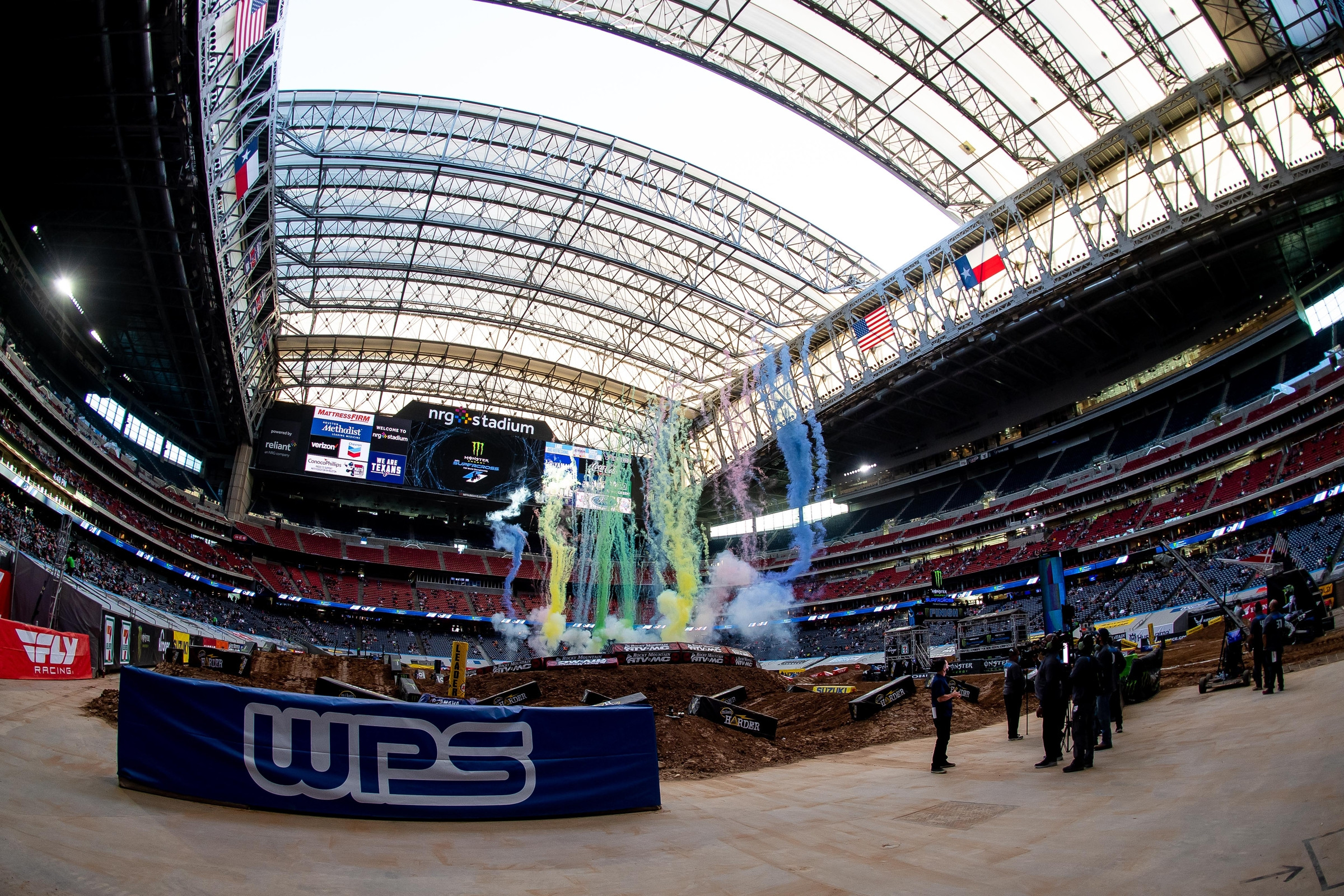 YEAHHHHHH!!! We are back racing people! And that’s pretty cool right? The Houston SX 1 kickoff to the 2021 season of Monster Energy AMA Supercross just happened and there is plenty to digest but also, we get to race tomorrow also! YAY for us! Right?

I’m gonna be knocking these columns out left and right with this schedule we have so forgive me for being a bit brief with this column. Here are some hits and misses from Houston 1.

HIT & miss: The track! Yeah I know we’re breaking the rules here by coming out of the gate with something that both hits and misses, but for an opening round, I thought this was a challenging track. The whoops were mellow but there was a quad not many riders did and some rhythms that rewarded the guys who wanted to send it. Not like the typical dumbed-down Anaheim 1, in my opinion. The real tough thing was the way the track broke down. It got soft and rutty and several riders made mention about how tough it got. That’s not something the guys have to deal with at Anaheim. It was tough for the guys.

HIT: Justin Barcia! Has to be right? GasGas Bam Bam was Fan Fun! On the factory KTM with red plastic (sorry, I’m not there with the people that yell and scream about a brand’s first win, this isn’t actually a new bike), Barcia came out and looked as dialed in. Grabbing starts, fitness on point…he made it happen out there to win, incredibly, the opener for the third straight year. And he had an air shock on the bike! So first win for Troy Lee Designs in the 450SX class, first win for a GasGas (officially but we all know, right?), first win for an air shock, and I’m sure I’m missing some firsts in here. He made some mistakes for sure but how cool would it be if Barcia could be a title contender throughout all 17 races? Whether he’s Honda, Suzuki, Yamaha or GasGas, he’s always exciting.

HIT: Ken Roczen! Roczen and Barcia were the class of the field whether it was in the way-faster heat race or the main event, these two guys rose above everyone else. Then again, they also got the start on a track where you mostly needed a mistake to get by someone. To be honest, I thought Roczen was going to get Justin a couple of times but passing Barcia is like dealing with a rabid Honey badger—you better be sure you’re in the clear when you make your move. So maybe Roczen was taking it a bit easy on the 51, it was the opener after all. Either way, Roczen looked good and remember, this is a brand new bike so everything with that seems pretty good.

HIT: Christian Craig. When Craig came on the Pulpmx Show a while back my co-host, Kris Keefer, said he thought Craig was “the man to beat” for the championship on the east coast. Despite Austin Forkner leading Craig in career wins 11-1, Keefer was convinced that the switch to Yamaha was what Craig needed. I mocked this pick (with Craig on the phone!) and promised I would shave my head if he did indeed win the title. I mean, I like Craig a lot but we’ve seen him be fast many times only to make a mistake along the way. Not in Houston though! He was next level in the main when it counted and won rather easily. Now this will be interesting if Craig has it all figured out. He’s had all the tools, he’s just been missing the toolbox. That’s how you put it all together. Do the Yamahas come with a toolbox where the tank is supposed to be?

miss: Chase Sexton! The rookie set the fastest time of the day in his qualifying sessions but maybe we should’ve known something was up when he tipped over twice on the parade lap! Maybe he needed a jacket or something? Anyway, he didn’t get the start he needed and then when Marty Marty’d, he got caught up in it. Then he fell again I believe, and it was all over from there. Still, WE CAN WORK WITH SPEED is something I’ve heard a time or two.

HIT: Austin Forkner! I gotta be honest here, I thought there was little chance Forkner stays away from the drama that seems to follow him on the track. Maybe not even drama, but emotions getting the better of him. Whether it’s being a jerk with lappers, deciding he HAD to be the fastest rider in qualifying or getting into it with the Lawrence brothers, I didn’t have “Austin Forkner passes Jett Lawrence cleanly and without incident twice in Houston,” as something I would type. But he did and he looked great at the opener.

miss: Eli Tomac! The defending champion has now gone DNF-20-4-5-22-3-7-7 at the first round of the SX series. He didn’t get a great start in Houston and got involved with Vince Friese and went down. Tomac thought it was Friese’s fault and extracted revenge, screwing himself even more in the process. At some point late, Zach Osborne got by him and it was a 13th. Not a great start to the season for the champ but hey, he’s used to it!

HIT: Marvin Musquin. Hey, remember Marv? He missed all of 2019 SX with an injury and even last summer, although he won a moto or two, never looked quite the same to me. Well, he caught and passed the hotshot kid on the green bike to take a rather easy podium at the opener. Looked good in doing it also. Whoops were easy so his Achilles Heel didn’t show up. Onward and upward for Musquin.

miss: Cooper Webb. All day and night long, Coop didn’t look as good as usual. Not sure what the deal was here and I assume he’ll figure it out quick. I went to my Cooper Webb whisperer (and Racer X columnist!) Phil Nicoletti for a comment on the #2’s ride and got this:

"I'm bummed the good start was in the heat and not the main."

miss: Jason Anderson. Everything was fine for the #21 as he was just inside the top ten with a so-so start and had he finished there, no one would have been wondering or asking about anything. He was fine. But it seems that Jason got some arm pump (according to the PR) and guys were blowing by him in the last five minutes, leaving him with a very poor 15th. That was weird. The good news for Jason and his team is it can only get better.

miss: THE JETT. The hype was high for Jett Lawrence just based on Jason Weigandt losing his mind about how good Jett looked at press day. Outside of the one Anaheim 2, we haven’t seen Jett quite master SX and Houston 1 wasn’t any different. Mistakes haunted him but it’s obvious the skills are there. He’ll figure it out soon enough but the opener definitely wasn’t what he wanted.

HIT: Fox. I mean, Fox Racing always has something cool cooking, but for Houston 1 both Adam Cianciarulo and Ken Roczen looked rather top notch. Good work by those guys in putting a couple of the best riders in some bright, clean designs.

miss: Wacko. Zach Osborne got tenth in the main event and truthfully, that’s not a miss because he was last after a fall in the first turn. But, overall, rough weekend for a guy I picked to win multiple races this year. He had a mechanical on press day on the face of a triple and absolutely ate crap a lap-and-half in. Like, is there possibly a worse way to start a season off? ICYWW, there is not. So he went from that to a couple of sub-par practices, got a decent time in the third one and then rode great to win the heat. The heat race win salvaged the weekend for him right? Main event he did what he could do coming from last, but “we” need “our” weekends to not look like an EKG.

Ok, that’s all I got for now, back at this after Houston 2! Email me at matthes@racerxonline.com if you want to chat about this race or anything else K?