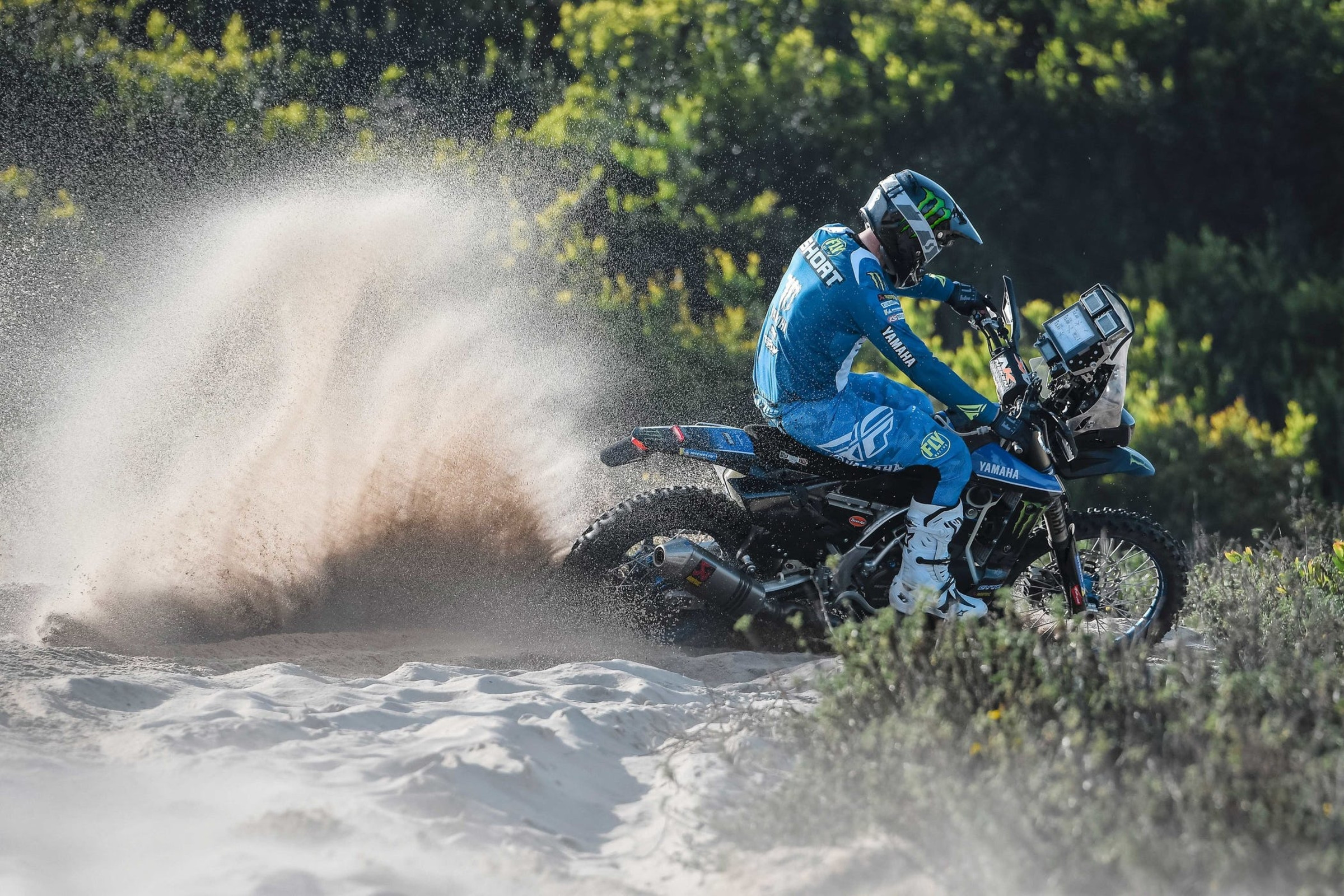 Ricky Brabec is the defending Dakar Rally Champion. While in a passenger car and rolling towards the airport and airplane that will deliver him to Saudi Arabia where he’ll put his fists up, bear his fangs and prepare to defend his 2020 title, he has something to say about one of his competitors.

‘It’s always good, I believe, to train with another Dakar Rally racer, so that way you can get some experience gauging speed and time and when you go to the line at Dakar on Day One,” said the Californian. “Andrew Short is great. Andrew is, in my opinion, a really good asset. He is smart. He’s full of information, whether it’s supercross, motocross, parts preferences, bike preferences. He’s been around a very long time and he’s not an airhead.”

Smack before Andrew Short and his Monster Energy Yamaha Rally Official Team WR450F looms the 2021 version of the Dakar Rally. That blue bike with his name and numbers on it? Think of it as a quarter million dollar two-wheel version F1 car poised to roll out and wreak havoc on the 12-stage, 3,000-mile Saharan Odyssey known simply as “Dakar.”  Short, a 16-year Monster Energy AMA Supercross and Lucas Oil AMA Pro Motocross Championship challenger here in the U.S., is now set to contest the 5,000-mile, two-week Dakar Rally once again. Short, originally of Colorado, is also a Motocross of Nations champion with Team USA who won nine AMA races and hit the podium 55 different times. The competitive flame still burns blue for him. Having put the work in and plotted and schemed for the task at hand, Short now wants nothing more than to win the Dakar Rally and while glancing over his blue, green and black Yamaha WR450F, we stuck a recorder in his face and got the untold story of the who, where, what and why of the 2021 Dakar Rally.

Racer X: Hey, brother. I know it’s Christmas Eve and you’re trying to head off to the airport and off to Dakar, but thanks for taking the time to do this. Long question short: How do you feel about the mission you’re about to click into gear.
Andrew Short: I’m stoked. I love rally and it’s been a pretty cool adventure.

When does the jet take off for Saudi Arabia?
I leave tomorrow morning and that’s kind of strange with Christmas and the family, and it has been a wild year. Today, I’m going to go ride around the farm here and do some family stuff and we have a school function tonight, so I’m happy I’ll be able to go to that. I’ll be mindful and careful with all the protocols set in place. It’s been crazy and I’m ready to start this event.

A hell of a lot goes into tooling-up for such a prolific and globally recognized rally as the Dakar Rally. I mean both you and Yamaha are all-in with this event. Can you speak to all that?
Yeah, that’s what’s so cool about rally. In motocross, you go fast during the race and go hard from the time the gate drops until the checkered flag. In rally, there are so many things that go into it! It’s not just about speed. It goes from the preparation beforehand and even thinking about what to pack and bring and the travel just to get there. It’s just a big sense of adventure from the time you sign-up or commit to it. This is what attracts me to rally and what that rally spirit stands for. You always have to adapt and do the best with what you have. You see and encounter all kind of things and you have to have an open mindset. This is just part of it and I definitely think rally racers are well suited for 2020 because you have had so many ups-and-downs and lefts and rights. That’s perfect for us.

So when you get to Saudi Arabia, where do you go?
[Laughs] Wow! The first hurdle was traveling. Because of COVID, all of the regular flights were cancelled, even if you had a VISA. The promoter, ASO, who also does the Tour de France, they charter flights from all over to get people to the race and you have a 48-hour quarantine and a COVID test. Once you’re inside the bubble where the race is going to start and finish, you pretty much don’t leave, which is fine for rally. They have a bivouac set up which is essentially just pits if you’re a racer. It goes from place to place. So yeah, the first little bit it’s a lot of scrutineering, checks and safety checks and all kinds of this nature that takes place at the beginning, but once the racing starts, it seems like you’re mind never turns off or stops. Your body is always moving and thinking and trying to strategize what’s going to happen in the coming days, so you’re wide-open and full-gas.

You got to experience international competition throughout your career, from competing for Team USA at the Motocross of Nations to racing international supercross races. When you first went over there to Dakar and did this race, I  said to myself, “Andrew Short is a racer on a different kind of level.” You’re more of a thinking guy, to me, and with the Dakar stuff and all, I just thought, “What a cool thing for him to do.”
Well, I think it’s a passion, you know? I love riding dirt bikes and it doesn’t really matter if I’m racing or riding. It can be trails or mountains or going to Baja – wherever – I love it all. This race gets massive worldwide the attention. This is an epic life experience. We get to go do it and initially I was so enthralled by the race and what it stood for. I raced a lot of motocross races all over the world from Japan to Europe and Supercross races all over the place. To do an event like this, an event that I never cared about or knew about until just recently, this is something that will be a part of me and leaves an impression for the rest of my life. It’s also cool to be surrounded by people that are so committed and people who want to be the best.

I’ve spoken Ricky Brabec all week and he’s been extremely complimentary of both you and your professionalism. How do you like working and training and testing with Ricky and Johnny Campbell and the entire Honda HRC outfit?
Yeah, I do nothing on the technical side with them, you know? I’m a completely different program. For one, it was really awesome to have had an American do so well at Dakar and do the unthinkable. It’s like the Americans winning Six Days (Note: The International Six Days Enduro race has been held since 1913, it took over 100 years for Team USA to win it). Forever, no one thought that would ever happen and to see Ricky win and overcome all of that, it’s huge. Just to be a part of that group and to ride and train with those guys. Jimmy Lewis has been a huge asset with the navigation part. He’s got a great mind for sharing and teaching and learning for dirt bikes. We’ve had access to deserts back in America. All of us got together and we were able to ride and do a lot of navigation and road book training. I have to be good at navigation because I’m not willing to take the chances and go as fast as I can. I mean Ricky goes really fast in the desert because he grew up there and he knows it and it’s part of his DNA. I have to really lean on navigation to be good and to have a chance. I like that aspect. Hard to learn. I really underestimated that.

Supercross racer hauling-ass at 110 miles an hour on flat dirt and trying to read everything and trying to deal with the navigation… How is that for you? I mean you came from racing in stadiums before 50,000 fans and you’re out there in the middle of nowhere…
If you’re going in the right direction, it definitely helps! You’re riding for hours on end. You make one mistake or go the wrong direction, that’s 15 minutes. There is so much that goes into it. Everything is gnarly. If you’re bike breaks out there, you have to fix it yourself. These are things that I never had to carry or even think about in supercross, these are skills that I value. It’s just one thing after another in rally.

Hey, I know you’ve got to run. Can you win this thing?
I really feel like I had a really good chance last year to win, but had some stuff happen to me on day one and day two and my race was over. I’ve never been so dejected. Dude, I was in a bad spot after that. I had a good opportunity and it just didn’t go my way. For this year I have a little bit more of an open mentality, especially this year. I don’t want to crash. I have to be in it every day and if I can make it to the rest day in good position, I’ll be in a good spot to do good in week two. I need to be a little smarter. I need to let the race come to me. Last year I felt like I had a good opportunity to win it, but forced it and crashed and made some poor decisions. I wanted it too much. This year, I think I have a great chance at doing well. We’ll see what happens.

Okay, my friend. Best of luck out there in the Saudi Arabian desert. We’re totally rooting for you here in the U.S.A.
Thanks EJ! I’ll call you from the bivouacs along the way during the race.