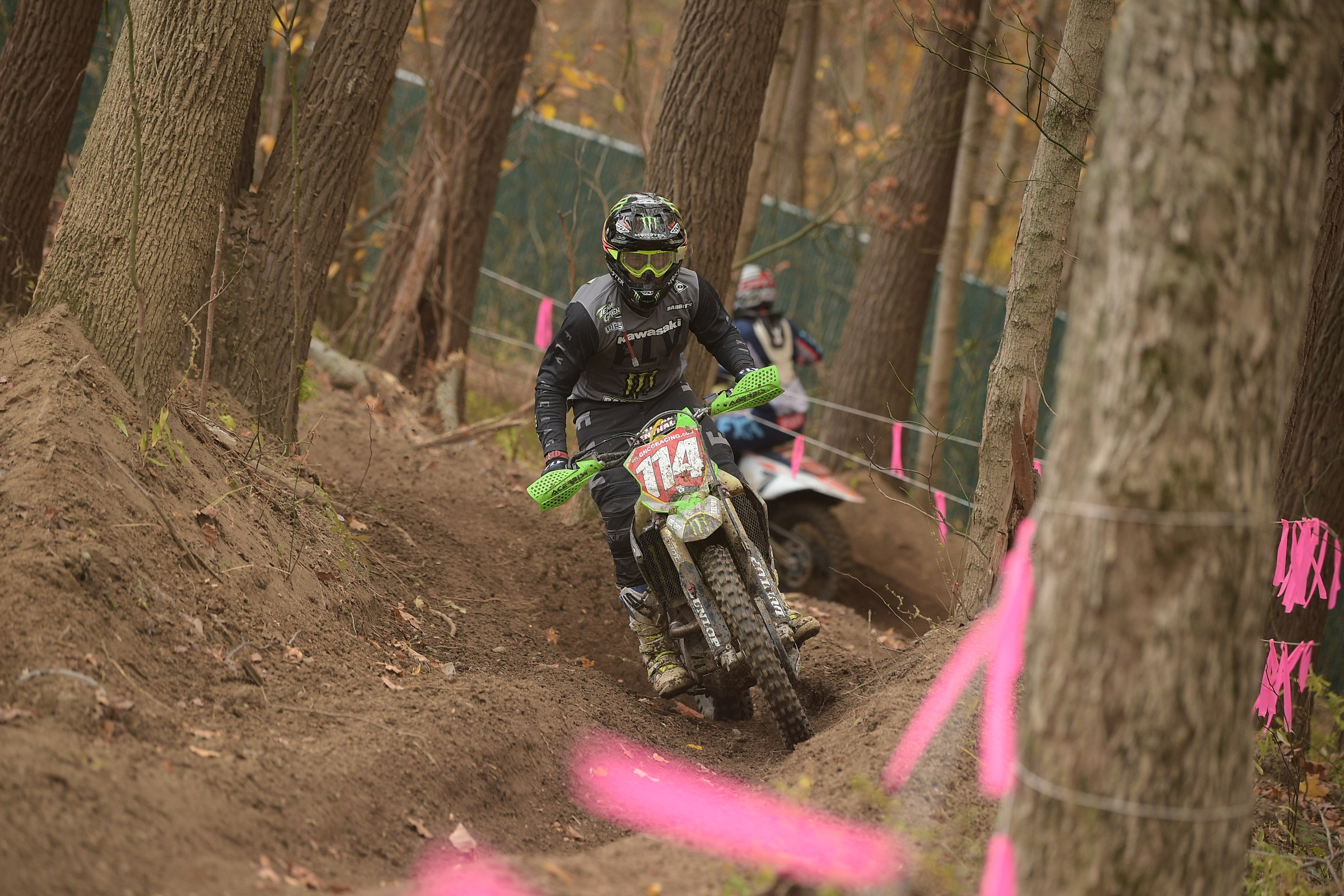 GNCC Report Four Things We Learned at the Ironman GNCC

Crawfordsville, Indiana would play host to the 26th running of the Ironman GNCC with a huge crowd of racers and spectators alike. Ironman has a reputation as being one of the most fun and largest events of the entire GNCC Racing season. Traditionally it serves as the season finale, but due to rescheduling around the COVID-19 pandemic, one round still remains, which gave a very different feel to the Ironman and lent a hand to producing some great racing. Here’s what we learned.

Back around 2011-2012 the word “epic” became, well, a bit played out in GNCC Racing. GNCC race announcer Rodney Tomblin and myself both used it so much at the track and in writing that everyone began to hate hearing it and it fizzled out. Well, the 2020 running of the Ironman seems like a golden opportunity to bring it back because there’s no better fitting word for how things shaped up on the racecourse!

The state of Indiana had experienced an extreme lack of rain for quite some time. In fact, when the Ironman National round of the Lucas Oil AMA Pro Motocross Championship ended we actually spread grass seed on the motocross track. When the track crew arrived to set up for the Ironman GNCC, none of the grass had grown! We then found out it had not rained since just prior to the Ironman Pro Motocross. round. Of course, that would change the week leading up to the Ironman GNCC, as the facility would receive nearly three inches of rain on Tuesday night and into Wednesday morning.

It would prove to be exactly what the facility needed. Temperatures rose into the high 70s on Thursday, and again Friday. This would help to dry out the muddy areas while also keeping a fair amount of moisture on the majority of the course. Conditions on the weekend would be absolutely perfect with the only mud on the course coming from some of the creek crossings. Interestingly enough, even with over 2,400 racers competing through the weekend the track never got overly rough or chopped out. This will likely go down in history as the most perfect conditions the Ironman GNCC has ever seen.

Strang Still Has It

Once upon a time it was common for 30-plus age riders to dominate GNCC Racing. In fact, Rodney Smith won his fifth GNCC title at age 40 back in 2004. However, it has since become a younger rider’s game. Now, much like Pro Motocross, by the time a rider hits their 30s, they’re hitting the tail end of their career. Josh Strang has definitely become the exception. By no means should Strang be considered “old” but aged at 32 years old, he’s the senior rider in the XC1 class. But he still has it.

Strang came over from Australia in late 2006 and tried his hand in the 250 A class at a couple of late season GNCC events. This was prior to the addition of the XC2 class in GNCC. After a couple of top five finishes in 250 A, the experience would lead to a full-time ride with the Suzuki squad in 2007. He took his first GNCC overall win in 2008, and full GNCC National Championship in 2010. In 2012, Suzuki disbanded its off-road team so Strang took a ride on the West Coast as part of the RPM/KTM team for a season. He moved back east in 2013 and returned to GNCC Racing on a nearly privateer effort for several seasons. Eventually he landed on the Factory Husqvarna squad before moving over to the Babbitt’s Kawasaki team last season.

The last few seasons have been a bit up and down for Strang. He’s taken some podiums, but a few minor injuries and some tough luck have also left him off the podium a lot as well. This has been a bit of a comeback year for Josh. He’s scored podiums in nine out of 12 races so far, and two of them are wins. A few folks have argued that the absence of several big contenders such as Thad Duvall, Trevor Bollinger, Ricky Russell, Ben Kelley, and Josh Toth have helped Strang’s results but if you’ve watched him closely and watched his speed, the fact is Strang has elevated himself this season and is truly looking really good.

As an example, Strang won the Camp Coker event earlier in the season after a hard-fought battle with Kailub Russell. Strang was still leading Russell when the defending champion went down. As for the Ironman GNCC, well, Steward Baylor came in as the favorite having won the last three events but Strang was able to win the race straight up. No drama, no issues, he was simply the best rider on this day.

Battling for the Podium

Steward Baylor would lead the first three laps, and then keep Strang within eight seconds through the next few laps. Meanwhile, Ben Kelley and Kailub Russell would also battling back and forth in the late stages of the race, just out of sight of the lead duo. Baylor would end up stuck on the infamous Ironman Hill on the final lap and lose a little time having to turn around and take another whack at the hill. The second pass would be successful but he would find himself about 30 seconds down on Strang with just around eight miles to go.

This actually allowed Strang to settle in a ride at a slightly less aggressive pace. Baylor would hammer down and catch up to less than five seconds behind Strang at the finish, but it was just a little too late at that point. Baylor would hold on to finish second. At the same time, Ben Kelley had pulled up on Baylor’s rear tire and Kailub Russell sat just a few seconds behind. Kelley would end the day on the podium in third while Russell finished off the podium for the first time all season, minus his injury at the Burr Oak event.

It’s pretty exciting that after three hours and four minutes of racing the top four riders all finished just around 10 seconds apart. We’ve seen years where races were decided by minutes, but these close finishes have become a more common trend over the past several seasons. Let’s hope it continues into the future.

One of the biggest talking points of the 2020 season has been the close and intense battle taking place for the XC2 class championship. Since he opening round, we’ve watched three-rider battle with Mike Witkowski, Johnny Girroir, and Craig Delong all swapping wins. All three have also finished off the podium so far, but Ironman may have provided one of the biggest breaks for two riders and the biggest heartbreak for another.

Coming into the Ironman round, Girroir held a small margin in the XC2 points lead. Then he suffered some issues at the previous round, meaning he needed to rebound at Ironman to re-extend his lead. Girroir would lead on and off a few times throughout the day. After dropping all the way back to fifth, Girroir was charging to make up time when he suffered a hard crash and actually knocked himself unconscious. Somehow, he got back on the bike and rode to the finish to end the day in 11th. Meanwhile, Craig Delong had worked his way from fifth place into the XC2 class lead to take the win. Lyndon Snodgrass landed his first XC2 podium in second place while Witkowski rounded out the podium in third.

With the Iroman win and the heartbreak for Girror, Craig Delong now holds the XC2 points lead with Witkowski in second. Girroir has dropped to third. However, all three of these riders still have a mathematical shot at the XC2 class championship. Delong (296 points) leads Witkowski by 11 points and Girror sits five points further back. Things could get really interesting at the final round.