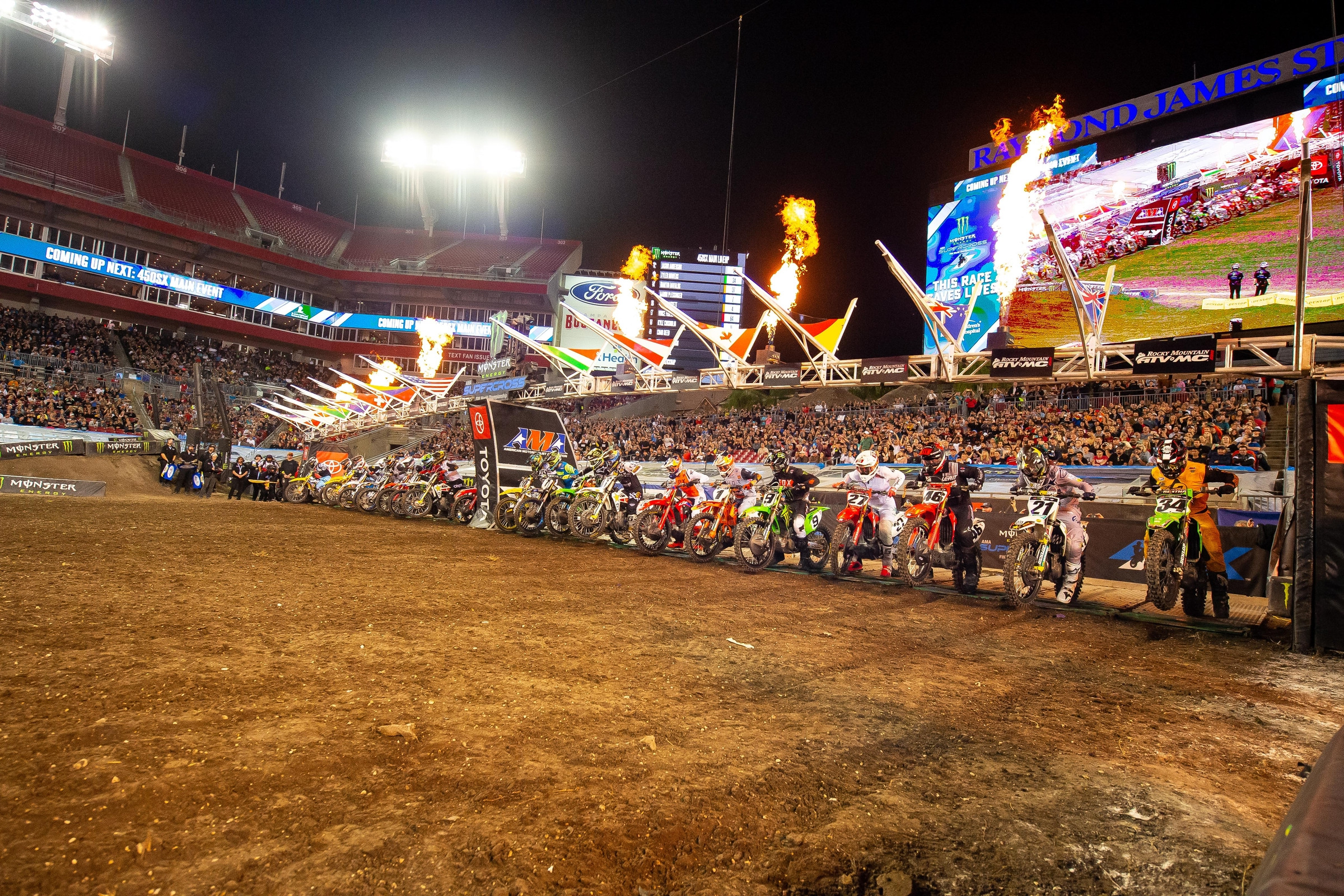 Feld Entertainment has released the 2021 Monster Energy AMA Supercross schedule. Prior to the release of the full schedule, the only confirmed date for 2021 was the Daytona Supercross, which was confirmed to Saturday, March 6, 2021. The 51st annual Daytona Supercross date was publicized by Daytona International Speedway press earlier this month.

The press release from Feld confirms a later start and different location to the season—January 16 in Texas compared to the typical first weekend in January in Anaheim—and that the championship will conclude in Salt Lake City, Utah. The release also states "fans are welcomed back in stadiums at reduced capacities." Feld has put together a Monster Energy Supercross’ Fan Wellness plan that you can check out that details policies from both Feld's perspective and the fans' perspective, explaining how both sides will cooperate to make the championship happen.

Below is the full press release from Feld Entertainment.

Ellenton, Fla.,—Feld Entertainment, Inc., today announced the schedule for the upcoming 2021 Monster Energy AMA Supercross, an FIM World Championship, season. Tickets go on sale in early December as Supercross fans are welcomed back into stadiums at reduced capacities. For the second consecutive year, the season will conclude in Utah, as the “State of Sport” once again hosts the season finale, although this time with fans in attendance.

Since the series began in 1974, California has hosted most of the season openers, as the city of Anaheim has become synonymous with the start of the Supercross season. For the first time in 25 years the series will start in another state by opening at NRG Stadium in Houston, Texas, for the first three rounds. The Texas trio of races will be followed by a two-race stint at Lucas Oil Stadium in Indianapolis, Indiana.

Supercross was the first sport to complete its season and championship in a bubble environment in 2020 due to the pandemic. Bubbles are now widely popular and being used by the NBA, NHL, WNBA, and MLB to great success. The NFL was one of the first sports to welcome fans back to stadiums and Supercross is excited to follow their lead while also using some of their own bubble-environment tactics in the 2021 season by hosting multiple races in a single location.

After Indianapolis, the series will venture west to State Farm Stadium in Glendale, Arizona, for another three races then traversing south to Daytona Beach, Florida, for the annual singular event at Daytona International Speedway. Rounds 10, 11 and 12 will take place at AT&T Stadium in Arlington, Texas, after a two-week break.

Rounds 13–16 of the 17-race championship will be announced at a later date as we continue to work with our stadium partners and their local governments and health departments, while also staying current with national mandates and CDC guidelines. Additionally, the remaining Eastern Regional and Western Regional 250SX Class races, Triple Crown and East/West 250SX Showdown events will also be announced later.

One of the unexpected surprises of racing in the bubble in Salt Lake City was the creation of mid-week races due to the condensed nature of the schedule. Racing every Wednesday during the three-week stretch became a fan-favorite while also boosting television ratings in an otherwise non-traditional broadcast window for Supercross. With that in mind, Supercross will host four SuperTuesday races, one in each of the host cities - Houston, Indianapolis, Glendale and Arlington, a first in the sport’s 48-year history.

The season finale will take place at Rice-Eccles Stadium in Salt Lake City as the Utah Sports Commission - a long-time Supercross partner, is once again eager to host the season’s final event and championship wrap up with fans in attendance.

“AMA Supercross is among the most exciting motorcycle racing on the planet, and the AMA is pleased to join Feld Entertainment and the FIM in announcing the start of the 2021 season,” said AMA President and CEO Rob Dingman. “In 2020, Feld Entertainment, the AMA and all our partners, and of course the racers and teams, worked tirelessly and innovatively to crown champions amid a global pandemic. The lessons learned will guide the management team as it delivers another incredible season of racing, while ensuring that all COVID-19 precautions are met and fans get the show that they have come to expect from AMA Supercross.”

Storylines abound for the 2021 Supercross season as the 450SX Class continues to feature what has become an ever-expanding, deep array of talent. For the first time in five years, three Supercross champions will be competing for another title – Jason Anderson, Cooper Webb and Eli Tomac, while a continually-evolving corps of deep threats will be on the hunt to dethrone and wreak havoc by winning races of their own - Marvin Musquin, Ken Roczen, Justin Barcia, Adam Cianciarulo, plus premiere class rookies Dylan Ferrandis, Chase Sexton and Shane McElrath.

"This schedule demonstrates the combative spirit of Feld Entertainment, the AMA and the FIM to take on the challenge and is a statement of our common hope for a better world in the near future,” said Jorge Viegas, FIM President. “Hard core fans may be hungry for ‘more’, but with the pandemic situation, it is a realistic calendar. Competition starts mid-January under COVID-19 restrictions until Easter. Afterwards, hopefully we can return to a more ‘traditional’ scenario. So, riders, sponsors and the industry can now prepare for 2021 and the fans also know when they can get in ‘Supercross mode’.”

Tickets for the first twelve Rounds will go on sale to the general public on Tuesday, December 8. Preferred customers can sign up in advance for early access to purchase tickets a week prior, starting Tuesday, December 1 by visiting SupercrossLIVE.com.

Supercross has implemented enhanced health measures to help ensure the highest standards of wellness when it comes to today's live experience. Seating capacity will be reduced at each stadium with a Pod Seating structure, which will allow family and friends to safely enjoy all the action while social distancing from other groups in attendance. More information about each stadium’s safety protocols can be found on their individual websites - NRG Stadium, Lucas Oil Stadium, State Farm Stadium, AT&T Stadium. Unless otherwise exempted by law, guests age 2 and older must wear a face covering except when actively eating and drinking – local venue rules also apply. More information about Monster Energy Supercross’ Fan Wellness.

Watch the announcement video from Feld.