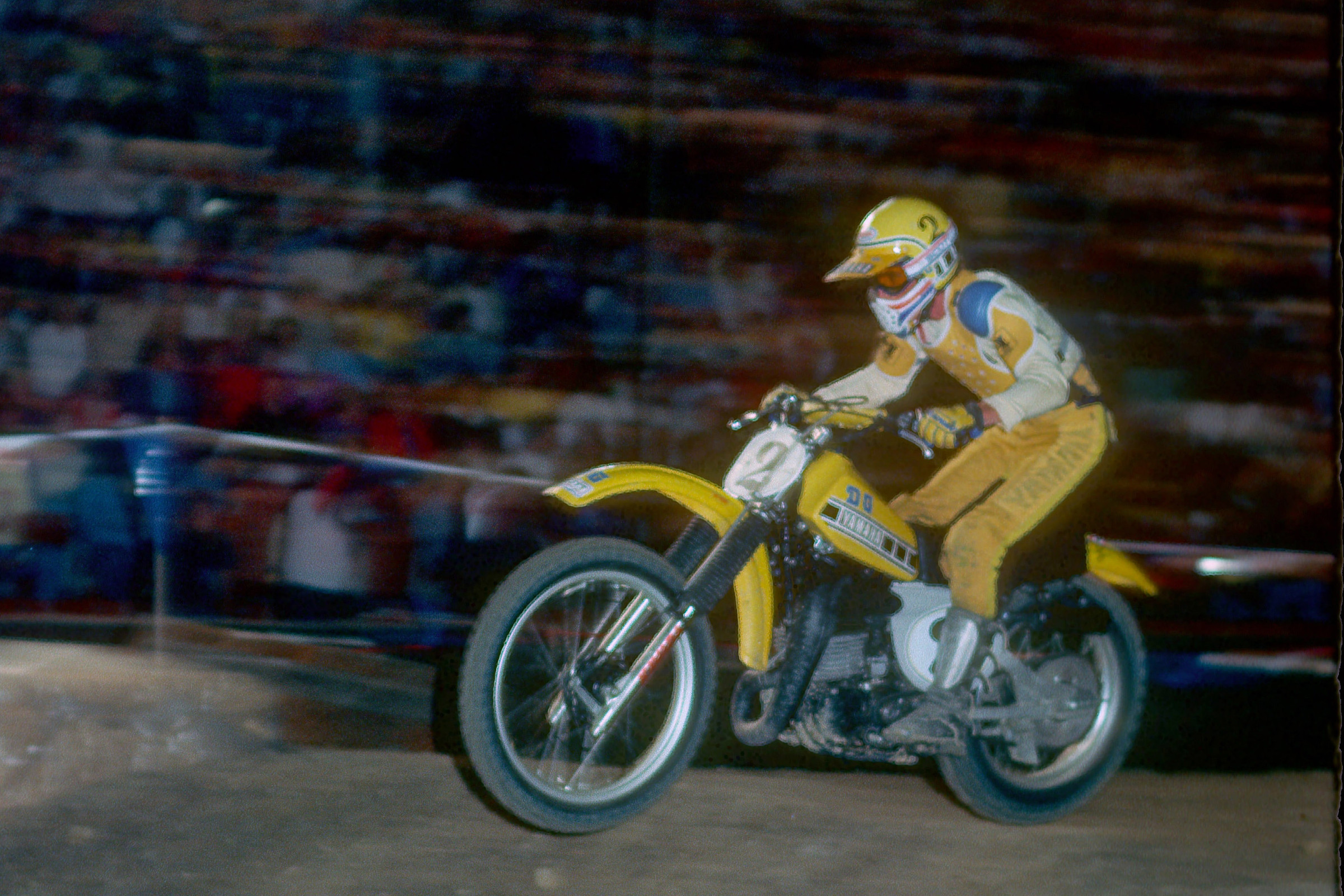 Ricky Carmichael has more records than just about anyone in motocross, just as Jeremy McGrath has more than anyone in supercross. RC won 102 outdoor nationals in just 127 starts. Jeremy's 72 AMA Supercross wins and seven titles in eight years dwarf the totals of anyone else. And Carmichael's 10 straight AMA Motocross titles without losing a single MX title fight in his professional career are just ridiculous standards that nobody is ever going to touch... But they could. While McGrath and Carmichael have mind-boggling records, they are not truly unbreakable. As unlikely as it seems, someone could come along and do what Ryan Villopoto, and James Stewart, and Chad Reed, and Ryan Dungey, nor anyone else could do, including Ricky in the case of Jeremy's SX standards, and that is to break those standards of 72 and 102 and even the 150 total SX/MX wins that the GOAT gobbled up. (If you don't believe that, check the growing pressure building when MXGP returns on Stefan Everts' amazing career records of 10 world titles and 101 wins as both Antonio Cairoli and Jeffrey Herlings close in.)

But there are some records that are truly unbreakable, at least not with the way things stand now. The sport evolves, rules change and the very idea that a record or standard can be overtaken is literally impossible in some cases. Take Jean-Michel Bayle in 1991, for instance. In that year he did something that no one else had done since AMA Supercross started in 1974. The French legend came to America and swept three of the four major AMA titles: 250 Supercross, 250 Pro Motocross, and 500 Pro Motocross. He's the only rider ever to win those three AMA SX/MX Professional Championships in a single season. In 1993, the AMA did away with the 500 class, making it impossible for anyone to ever match JMB.

Similarly, there is Jeff Ward's singular honor as the only man ever to win all four major AMA SX/MX titles: AMA Supercross, plus the 125, 250, and 500 outdoor titles. Again, the 500 class is no longer around.

In 2003, while the FIM was experimenting with a one-moto format in the FIM World Championships, Europe's King of Motocross, the aforementioned Everts, decided to not only race in the premier MXGP class on his Yamaha YZ450F, but he started racing the 125cc class aboard a YZ250F. He promptly became the first and only rider ever to win two Grand Prix motocross races on the same day. In fact, he ended up winning eight of the nine races he entered and would have ended up as 125cc World Champion as well as MXGP World Champion, where he won 10 of 12 rounds, but he missed the first three 125cc races. And on the last day of the year Everts did the unthinkable, entering the MX3 (650cc class) on a third Yamaha and winning that too, making him the only rider to ever win THREE GPs on the same day. The next year the FIM abandoned the one-moto format and also restricted riders to one class, meaning Everts' crazy 2003 records will never be broken.

Back in 1972, in the first year of AMA Pro Motocross, the series overlapped and sometimes joined two other existing series, the Inter-Ams (for 250cc racers) and the Trans-AMAs (for 500cc racers). When the race was a stand-alone national, it would have both 250 and 500 classes. But when it was an Inter-Am there was no 500 national class, just a support class, and when it was a Trans-AMA, there was no 250 national class. So, Gary Jones, the Yamaha factory rider, decided to ride a 250 in the Inter-Ams and nationals, and then a 500 in the Trans-AMA races in the fall. He ended up winning the 250 National Championship and placing second only to Brad Lackey in the 500 class' final standings, despite not competing in seven of the rounds! No other AMA rider has ever come closing to Jones' '72 season of simultaneously winning the 250 title and finishing runner-up in the 500 class in the same series, though it is very similar to what Everts did in 2003 in Europe!

In 1973, Yamaha imported Dutch Grand Prix racer Pierre Karsmakers to move to America and help develop their motocross program. Karsmakers had raced in the 500cc FIM World Championships in 1972 and finished 18th overall. He also competed in the '72 Trans-AMA Series and finished eighth overall. But in '73 Karsmakers dominated the AMA circuit in the 500cc class, including winning the season-opening Daytona motocross. He went on to score an astonishing 2,659 points on his way to the 500 AMA Pro Motocross title, winning by 1,232 points over runner-up Mike Runyard. Karsmakers also rode some 250cc races and managed to win one and also finish seventh there, despite only riding a fraction of the races. His '73 total of 3,153 points for 250/500 AMA Pro Motocross are far and away the biggest points haul in history, never to be match because the following year the AMA changed the points structure, and then stopped counting the old Inter-Am and Trans-AMA series events as part of the outdoor nationals.

Early on in the history of the AMA Amateur National Motocross Championships at Loretta Lynn's, it was possible for some riders to compete in as many as four classes if you were the right age. Danny Storbeck, a 15-year-old from Texas, signed up for the '83 event in the 125 A Stock and Mod classes, as well as the 125 Schoolboy (12-15) Stock and Mod classes. He would win three of them aboard his Yamaha YZ125s. His only defeat came when he crashed out of the last 125 A Stock moto. The next year the AMA and MX Sports changed the rule for the finals, limiting riders to just two classes during the final championship week, a rule that has stuck ever since. As a result, Danny Storbeck is the only rider in the history of the AMA Amateur National Motocross Championships to win three titles in a single year.

In the history of the Motocross of Nations, going back to 1985, when the format changed to three classes and three riders per nation, only one rider ever managed to win a moto outright aboard a 125cc motorcycle. While many probably think it's Johnny O'Mara from his extraordinary performance at the 1986 Motocross of Nations at Maggiora, Italy, the fact of that matter is that O'Mara only finished second in his two motos on the 125, finishing behind Team USA teammates David Bailey (500) in one and Rick Johnson (250) in the other. But ten years later, in 1996, Team USA's Steve Lamson raced his Honda CR125 to the only outright win for a 125 in MXoN history. In 2005 (Antonio Cairoli) and 2007 (Ryan Villopoto) 250F riders were winning motos outright, but Steve Lamson stands alone at the only man to do it on a 125, which are longer the choice of MX2 riders.

And then there's Bob Hannah in 1977. The Hurricane was basically in his third year as a professional motocrosser, his second with Team Yamaha, and his first as a defending champion in the 125 class. Hannah was ready to move up to 250s and 500s as he had already shown in '76 that he could ride anything. But Yamaha wanted to have #1 out there defending his 125 title, so the rider and the team came to a sort of compromise: Hannah would focus on the 250 in AMA Supercross, the 125 outdoors, and then also race the 250 and 500 classes because only one race overlapped with two classes, the Hangtown 125/250 opener. Unfortunately for Bob, he DNF'd the opener, badly hurting his chances for a repeat 125 title. But he did come back strong to finish third in standings, just 13 points behind the champion Broc Glover, who had tied on points with Danny Laporte but won on a tiebreaker. Hannah also performed well in the 250 class, finishing seventh despite missing the opener and having other problems. And then Hannah ended up finishing second in the 500 class standings, losing the title in the last round to Marty Smith and a broken throttle cable. But Hannah did win a title in 1977, and it was a big one, the first of three consecutive AMA Supercross Championships. So, to sum it all up, in one year Hannah finished first in SX, second in 500 MX, third in 125 MX and seventh in 250 MX.

Wait, there's more: Hannah also decided to compete in the Trans-AMA Series at the end of the year and finished second there as well on an open-class Yamaha. Visiting 500cc World Champion Roger De Coster ended up winning that title.

But here's the thing that makes 1977 so special for Hannah, and it's an unbreakable mark at that: Bob "Hurricane" Hannah managed to win at least one round in FIVE different major championships: AMA Supercross, Trans-AMA, the 125 Nationals, the 250 Nationals, and the 500 Nationals.